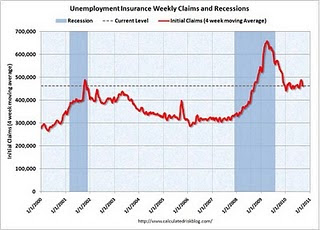 Initial Claims for Unemployment Insurance climbed by 12,000 last week to 465,000. That is the first increase in five weeks.

Just over a month ago, the weekly number hit 500,000 and threatened to break out to the upside from the range, but the decline over the last month brought us down to 450,000 (before being revised up to 453,000), which brought hopes that we might be breaking out to the downside.

This week's numbers seem to indicate that neither the hope -- nor the fear -- was justified. We seem to be stuck in a pseudo-recovery. The economy is growing, but not at the sort of rate needed to add a significant number of jobs and to put a dent in the huge army of the unemployed. (more)