Gamestop GME Stock Powering Up for a 20% Run 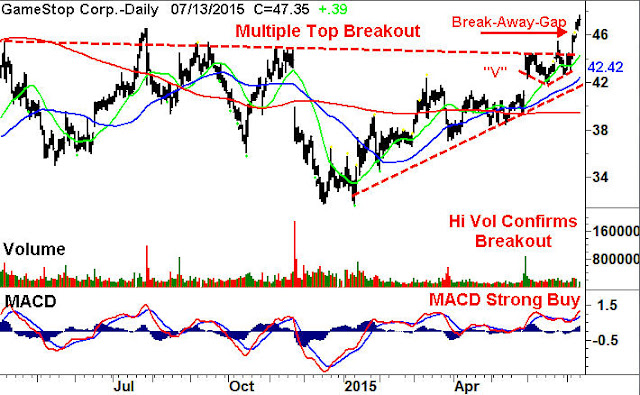 GameStop Corp. (GME) — Although this is a mid-cap stock, it is the largest U.S. video game and PC entertainment software retailer in the United States and has about 6,700 stores worldwide.

Capital IQ predicts sales will rise 3.2% in fiscal 2016 (ending in January), benefiting from releases that were delayed from the previous year. They also expect increased revenues from digital content and mobile devices as GameStop diversifies. For fiscal 2017, they predict revenue will increase another 1.6%.

Another positive is that management has stated they intend to continue a generous share buyback program. The company also pays an annual dividend of $1.44 per share for a current yield of 3%.

On July 7, GME stock broke from a multiple top followed by a breakaway gap from a bullish “V” consolidation. Very high volume and a strong MACD confirmed the breakout was genuine.

The target for the breakout is the multiyear high above $57, made in November 2013. It was at that time that it became apparent to analysts that GameStop would report almost $3 in annual earnings in January 2014, up from a loss of $2.13 in fiscal 2013. Representing just 14.6 times estimated fiscal 2016 EPS, my target of $57 appears readily attainable.

This would result in gains of more than 20%.

Ralph Lauren Corporation designs, markets, and distributes lifestyle products worldwide. The company operates in three segments: Wholesale, Retail, and Licensing. It offers apparel, including a range of men’s, women’s, and children’s clothing; accessories, which comprise footwear, eyewear, watches, fine jewelry, hats, belts, and leather goods, such as handbags and luggage; home products consisting of bedding and bath products, furniture, fabrics and wallpapers, lightings, paints, tabletops, and giftware; and fragrances. Ralph Lauren Corporation sells its products to department stores, specialty stores, and golf and pro shops, as well as through its retail stores, concession-based shop-within-shops, and its e-commerce sites. The company also sells its apparel, home, and other products through licensing alliances.
Take a look at the 1-year chart of Ralph (NYSE: RL) below with added notations: 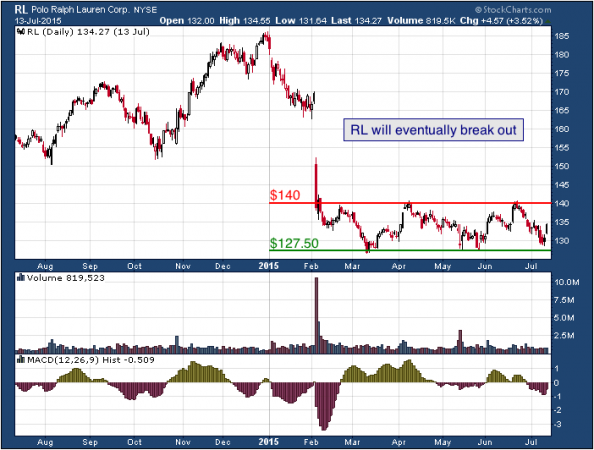 After a rough slide in January, February and March, RL started trading sideways over the following 5 months. While in the sideways move, the stock has formed a common pattern known as a rectangle. A minimum of (2) successful tests of the support and (2) successful tests of the resistance will give you the pattern.
RL’s rectangle pattern has formed a resistance at $140 (red) and a $127.50 support (green).  At some point the stock will have to break one of the two levels.

The Tale of the Tape: RL is trading within a rectangle pattern. The possible long positions on the stock would be either on a pullback to $127.50 or on a breakout above $140. The ideal short opportunity would be on a break below $127.50. 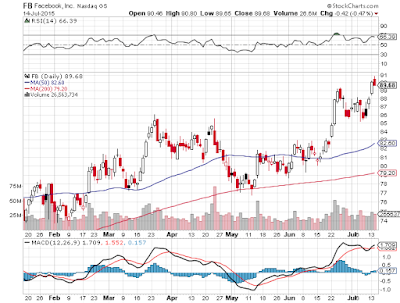 Rick Stuchberry, vice president portfolio manager, Richardson GMP
Focus: Canadian Large Caps and International ADR's
MARKET OUTLOOK:
We would like to remind everyone Apple has more cash than Greece has GDP. Do not lose focus on the bigger picture, the global economy is improving, and this is a hiccup of uncertainty. Greece cannot cause a contagion and hurt Europe further because the debt is consolidated into safe hands, it is merely a distraction. We have to take a step back and look at the moment of peak irrationality which occurred over the first half of this year. The bond markets have become so inflated that in some markets investors have actually invested in bonds with negative yields. This means investors have paid a government to loan that government their money. It is difficult to comprehend that investors willingly invested in losing investments, in order to secure safety. The bond market changes are causing the stock market to undergo a major transition. As the bond market begins to sell off, the income earning stocks within the market are joining in this sell off. The 20 Year U.S. Treasury is selling lower over the year, taking with it, the ZUT- utility ETF made up solely of income producing stocks. We think we are in the early stages of this correction and investing in Income is no longer safe. We still believe money will continue to flow into the stock market, but investors must be in the right investments within the stock market. We must move forward, and we believe the safest way to invest is in earnings growth. (more)

Is another Bank of Canada interest rate cut on tap? 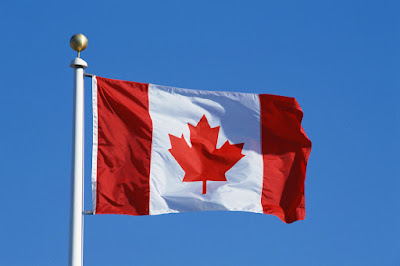 In a year when the Bank of Canada has already stunned markets with an out-of-left-field interest-rate cut, it’s hard to imagine another rate-setting decision by the central bank could match that sort of drama. But this Wednesday’s scheduled rate announcement from the bank could come a close second.
After a string a disappointing economic indicators that strongly suggested the Canadian economy had contracted for a second straight quarter, financial markets and central-bank watchers are abuzz with will-he-or-won’t-he anticipation: Will Stephen Poloz, the central bank’s governor, decide to follow up January’s surprise rate cut with another quarter-percentage-point reduction, to throw a life preserver to an economy that may (or may not, depending on whom you ask) have already sunk into a small recession? (more)