Eric King:  “Let’s talk about the U.S. dollar.  I know you have a lead Roman coin.  Can you compare what happened in Rome with what the U.S. is doing with its currency and how we are in trouble just like the Romans?
Dr. Roberts:  “Well, the Roman empire, of course, was a hegemonic power — the ruler of the known world, or most of it.  It was not only always fighting abroad … but they had a large number of civil wars.  So the cost of fighting themselves and maintaining their armies against outside forces essentially bankrupted the empire.

And the way they continued to finance the empire is the way the United States is continuing (to do), they printed money….
READ MORE
Please share this article
at 12:05 AM No comments: Links to this post

Bail in – A Western world financial concept
- Is your faith required to be a bank depositor misplaced?
- Do you know the moment you make a bank deposit you no longer have an asset but rather are legally an unsecured lender to the bank?
- Bail in can easily be avoided by simply utilising banks outside of the western system
- It is time to bank with the BRICS?
James E. Sinclair, CEO and President, Tanzanian Royalty Exploration Corp. and Executive Chairman, Singapore Precious Metals Exchange

The Last Time This Happened, These Stocks Soared 500% 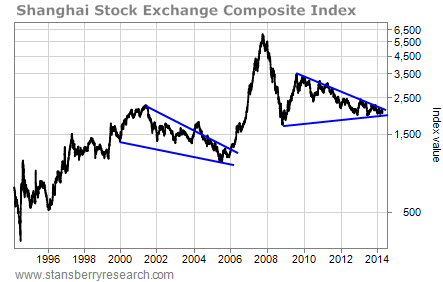 In March, I told you it was almost time to buy Chinese stocks.
Chinese stocks were one of the best-looking trade setups in the world... but from a technical perspective, China still needed a little more work.
The Shanghai Stock Exchange Composite Index (the "SSEC") – China's version of the Dow Jones Industrial Average – was stuck in a falling-channel pattern (a series of lower highs and lower lows). In order to break out of this pattern and establish a new bull market, I said the SSEC needed to rally above February's high of 2,150.
I suggested traders look to buy Chinese stocks once the SSEC broke above the 2,150 level.  (more)
Please share this article
at 12:04 AM No comments: Links to this post

Why Is Gold Behaving This Way?

The chart below (source: Stockcharts.com) may be very worrying to some  and it may be a source of great relief to others. It shows a potential Head and Shoulders reversal pattern, with a neckline at 90 and a peak of 107.5. If the neckline is penetrated significantly on the downside, theory says that the target destination will be 90 – 17.5 = 72.5, which will imply a fall of 22% from current levels. 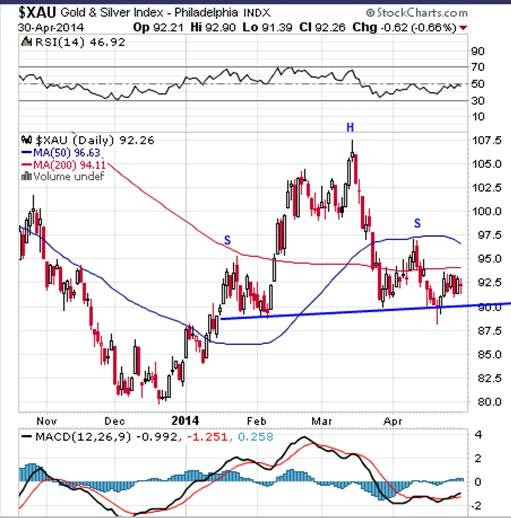 Of some significance, the relative strength chart below (also courtesy Stockcharts.com) shows that gold shares have been underperforming the gold price since the emergence of the Global Financial Crisis.
READ MORE

Where Flipping A Home Generates An 80% Profit

Overnight, RealtyTrac released its latest home-flipping report. What it found is that while the latest housing bubble may have indeed popped, manifesting itself not only in a decline in flipping prices but also a tumble in flipping activity across the US as a percentage of all sales from 6.5% a year ago to just 3.7% in Q1, and down from 4.1% last quarter, flipping, where a home is purchased and subsequently sold again within six months, can still be massively profitable, leading to returns that would make the pimpliest 25-year-old, math PhD HFT-firm owner green with envy.

The Last Two Times This Happened, The Stock Market Crashed

The last two times when margin debt reversed and fell after a record-breaking spike, all hell broke loose. In 2000, it was simultaneous. In 2007, it was delayed by a few months. Today, on the surface, everything is still hunky-dory. The Dow is just fractions below its all-time high that it set on Wednesday. But beneath the surface, parts of the stock market are already coming unglued, and holders of momentum stocks have been eviscerated.

The Nasdaq Biotech Index had beautifully shot up along an exponential curve. Then the hot air hissed out of it, and it swooned 21% in six weeks. The index includes big players, like Biogen, not just startups with big dreams and no drugs. After some buying on the dip, the index closed on Thursday down “only” 15%. But that hasn’t saved smaller momentum stocks: Exelixis is down 58% from its 52-week high and 92% from its all-time high shortly after its IPO in early 2000; Halozyme is down 60% from its high in early January. And so on.

In the social media space, the bloodletting has been ugly. The Social Media ETF SOCL is down 23%, but stronger stocks like Facebook (down 16% from its high a month ago) paper over individual fiascos, like Twitter, which has plummeted 48% from its peak last year to below its IPO price.
READ MORE
Please share this article
at 12:02 AM No comments: Links to this post