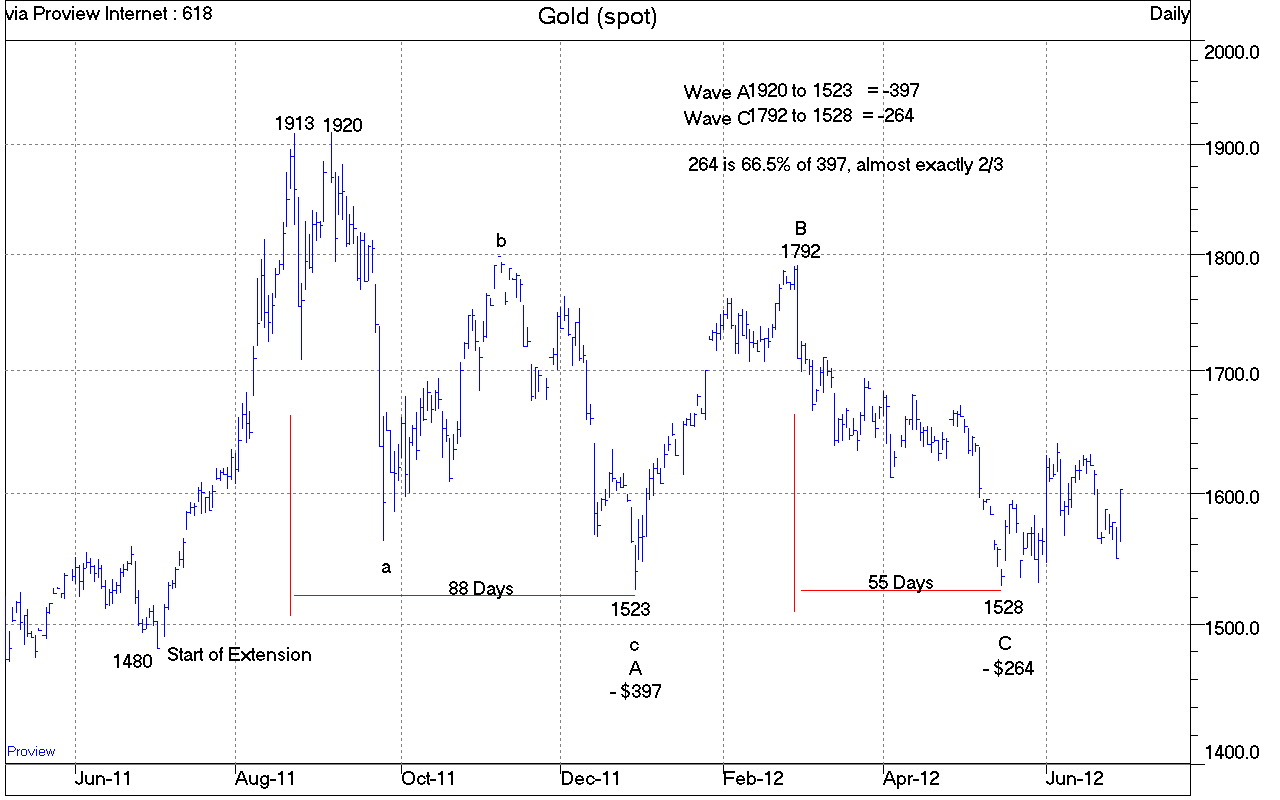 WHAT HAPPENED TO GOLD? – PART 2

There are no certainties in the investment universe. Investors are forced to weigh up the various risks and assess the probabilities involved before committing themselves to a course of action. Current Elliott Wave and technical studies suggest that the probabilities now favor a strong rise in the gold price.

It may be helpful to consider my personal assessment of the various probabilities at different points in the recent gold market correction. On 23 August 2011 when gold pushed above $1910 my guess was that there was a 90% probability of a severe correction. The target for the decline, as given in my keynote speech at the Sydney Gold Symposium in November, was circa $1480, the point at which the explosive extension in the gold price had started.

Extensions have a good record of retracing to the approximate point from which the extension began, in this case $1480. Market action during the decline is used to fine tune a more accurate end of the correction. Gold never got down to target of $1480, stopping not very far away at $1523 in late December 2011. At $1523 all the minor subdivisions suggested that there was a 75% probability that this was the low and that the market would move into a strong upward move, probably the most vigorous of the bull market. A lesser alternative considered was that $1523 might only be the A wave of a larger A-B-C correction.

TORONTO -- Standard & Poor's Ratings Services has cut its outlook from stable to negative on seven Canadian banks, over concerns about unsustainably high home prices and consumer debt levels, according to published reports Friday.

"A prolonged run-up in housing prices and consumer indebtedness in Canada is in our view contributing to growing imbalances and Canada's vulnerability to the generally weak global economy, applying negative pressure on economic risk for banks," S&P said.

The credit rater also reaffirmed the ratings on all seven banks, the Journal said.

However, S&P affirmed its ratings and maintained stable outlooks on five other Canadian banks including Canadian Imperial Bank of Commerce (TSX:CM) and Bank of Montreal (TSX:BMO).

Banks began to warn as early as the closing months of 2011 that consumer borrowing would slow as pent-up demand in the housing market becomes exhausted. Meanwhile, low interest rates have been putting pressure on their bottom lines.

Canadian officials and economists have repeatedly warned that the housing market is overheated and consumer debt load are too high.

Consumers have taken advantage of ultra low interest rates since the recession to heap on low-cost debt. The Bank of Canada decided earlier this week to keep its overnight lending rate -- which affects prime rates at banks -- at one per cent to stimulate a still fragile economy.

However, Mark Carney, the central bank governor has issued repeated warnings that the plan comes with a consequence that could spell economic trouble in times ahead. The most overstretched consumers could find themselves sunk if interest rates rise.

With household debt at an all-time high above 150 per cent of income, the Bank of Canada has declared it the number one domestic risk to the economy.

Moody's Investors Service in April said Canada's banks are collectively the soundest in the world and recommended the financial institutions to jittery global investors.

Unlike counterparts in the U.S. and Europe, Candian banks suffered no failures during the 2008-09 financial crisis.

Silver has perked its head up and sniffed the next round to hyperinflation is on the way. Load up the truck; it’s expected to be the best ride, yet. Here’s why:

No less than three articles penned by well-placed journalists at the ‘establishment’ rags of the Wall Street Journal, Financial Times and the Economist were launched within days of each other, with all three ‘suggesting’ that Bernanke better start stirring-up the animal spirits—on the pronto!

Jon Hilsenrath of the Wall Street Journal, the man who the straight-shooting Stephen Roach of Morgan Stanley calls the real chairman of the Fed, wrote Wednesday, following the dismal U.S. GDP report:

A few quick thoughts on GDP report out this morning:

Key price indexes are uniformly running below the Federal Reserve’s 2% objective. The personal consumption expenditures price index was up 1.6% from a year ago, thanks in part to falling gasoline prices. This is the price index that the Fed watches most closely, more so than the consumer price index produced by the Labor Department, which is running a touch higher. Excluding food and energy, the PCE price index was up 1.8% from a year ago. The Fed watches this ex-food-and-energy index to get a read on underlying inflation trends. For the quarter at an annual rate, the PCE price index ran at 0.7% and excluding food and energy it ran at 1.8%. An alternate measure, the “market-based” price index, is also running below 2%. This is ammunition for Fed officials who want to act right away to spur growth. Not only is growth subpar, and the job market stuck in the mud, inflation is also running below the Fed’s long-run goals.

Final sales of domestic product — a measure of how the economy is doing when you take out inventory swings – up at a 1.2% rate in Q2 and averaging a 1.7% rate since 2011.That’s really substandard for a recovery.

Now from Greg Ip of the Economist. Ip is Europe’s version of Wall Street Journal’s Hilsenrath, but it’s all the same as far as the American-European central bank alliance is concerned, with the Depression of 1873-79, the banking crisis of 1907, the brief but deep Depression of 1921, and the Depression of 1930-1945 to serve as stark reminders that the two economies are inexorably tied at the hip.

Ip piece for the Economist was written with the point of view of an article he would write in 2021, looking back at monetary policy of 2012. A blog entry about Ip’s piece can be found at Zerohedge.com.

To review EnerSys' stock, please take a look at the 1-year chart of ENS (EnerSys) below with my added notations:

ENS has created a couple of important price levels to watch. First, ENS has formed a clear resistance at $36 (navy), which would also be a 52-week high breakout if ENS could manage to break above it. In addition, the stock is climbing a short term, up-trending support level (red) over the last (3) months. These two levels combined have ENS stuck within a common chart pattern known as an Ascending Triangle. Eventually, ENS will have to break one of those two levels.

Why Is Future Silver Supply More at Risk than Gold?

The focus of the markets and the alternative media is firmly placed on the continued disintegration of the world financial system. Many believe that the collapse of the fiat monetary system along with the global banking cartel is the worst possible outcome. However, this may actually turn out to be the good news in a sea of bad news that is lurking around the corner.

As the world's attention is currently directed at its massive paper-debt dilemma, a physical problem looms larger each passing day. This is what I call, the brontosaurus in the living room. The information provided in this article may help connect the dots to the reader who has been grossly misinformed by the highly specialized analysts in the various industries and media.

In the future as tens of trillions of dollars of debt masqueraded as wealth implodes, there will be a stampede into the best safe havens available -- the precious metals. Many believe gold will play the major roll in this upcoming transfer of wealth. While this may be true, silver could actually turn out to be the better choice when we consider the factors presented in this article.

The inspiration to write this article came while I visited several historic mining towns in Utah. One of these mines was the Horn Silver Mine located in Frisco, Utah. After spending most of the day looking at the remains of the town, its old kilns and the abandoned mine, I began to wonder how much silver was produced there and what were the size of its ore grades. (more)

Most Important Silver COT Chart for 2012 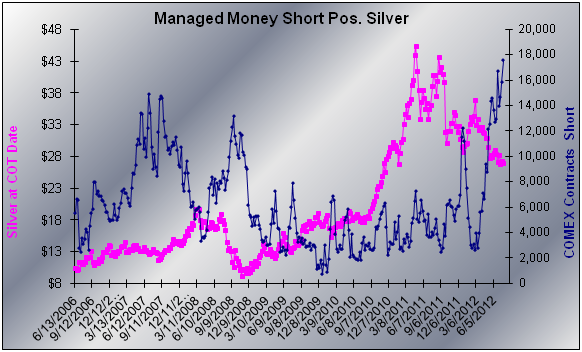 Mr. Arensberg wanted me to share with you-all the chart below, which he says is the “most important chart for the CFTC commitments of traders (COT) data for silver so far in 2012.” Gene already commented on the very bullish positioning in the Vulture subscriber charts over the weekend, but he wanted a visual representation of it available.

The chart is of the short positions by the traders the CFTC classes as “Managed Money,” including hedge funds, Commodity Trading Advisors (CTAs) and other funds that trade futures for clients. They are normally on the long side for silver futures, but over the past couple months they have been adding more and more short positions up to a new record high for the entire disaggregated COT report data going back to 2006. 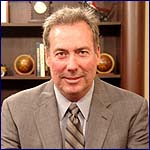 The bottom for silver prices looks to have been reached recently says, David Morgan, but, in order for prices to start moving upwards, gold is going to have to lead the way.

Speaking to Mineweb.com’s Metals Weekly podcast, the author of The Morgan Report and a silver specialist, Morgan explained that the current consolidation phase is likely to continue for a while longer but added, “the sentiment right now is for safe haven status and gold holds a much higher place in investors mind than silver does, so to get silver moving again I think gold is going to have to lead us up out of this basic pattern in a rather significant way and I think then silver will probably follow it up.”

“More and more people are waking up to the fact that silver has every quality that gold has only it sells for a much cheaper price. As people get squeezed more and more but still want to protect what they have left, the tendency is in the latter stages of a major bull market, like we are experiencing, more and more money moves into the silver market rather than the gold market because gold is so expensive that most people by-pass it even though they might prefer to own gold.”

Chart of the Day - Colgate-Palmolive (CL)

The "Chart of the Day" is Colgate-Palmolive (CL), which showed up on Monday's Barchart "All-Time High" list. CL on Monday posted a new all-time high of $108.50 and closed up +0.28%. TrendSpotter has been long CL since last Thursday at $106.38. Last Friday, Fitch Ratings affirmed Colgate-Palmolive's Long-Term Issuer Default Rating (IDR) at "AA-" and said the ratings reflect the company's scale with approximately $17 billion in revenues at the last 12 months ended June 30, 2012, leading market shares, consistently strong operating performance, and considerable liquidity. Colgate's EBITDA margins of 26% are in the top tier of large personal care manufacturers and Colgate is one of the most geographically diversified consumer products companies, generating more than 80% of its revenues outside the United States. Colgate-Palmolive, with a market cap of $50.8 billion, is a leading global consumer products company, tightly focused on Oral Care, Personal Care, Household Surface Care, Fabric Care and Pet Nutrition. Colgate sells its products in countries and territories around the world under such internationally recognized brand names as Colgate, Palmolive, Mennen, Softsoap, Irish Spring, Protex, Sorriso, Kolynos, Ajax, Axion, Soupline, Suavitel and Fab, as well as Hill's Science Diet and Hill's Prescription Diet pet foods.