We’re Headed For An Apocalypse – A Financial Armageddon

kingworldnews.com / May 16, 2014
Today an outspoken hedge fund manager out of Hong Kong warned King World News that the world is headed for an “apocalypse,” or what he called a “financial Armageddon.”  William Kaye, who 25 years ago worked for Goldman Sachs in mergers and acquisitions, also predicted this disaster will be far worse than anything the world witnessed in the Great Depression of the 1930s.

Kaye:  “When we revert at some point, which is the stated objective of the Fed, to a more normal economy, where banks lend and businesses look to expand and grow their top line, and the labor force participation rate does start to meaningfully decline, in that scenario we potentially set off a process that results in financial Armageddon….
READ MORE

Gold Miners are Once Again Oversold

The last PMs sector update I had on the blog was all the way back in early April of this year. In the article, I discussed Gold’s outperformance in Q1 of 2014 and the large number of bullish contracts that have built up, as hedge funds started herding with expectation of even higher prices (something that I disagreed with).
I do not usually do prices targets, but I did state that Gold could drop lower in coming months and quarters. Whether this happens before the bear market ends remains to be seen, but one thing is now certain – PMs selling pressure has eased… for now.
Chart 1: US equities are at record while PMs sector is near 3 year lows

Source: Short Side of Long
Please share this article
at 12:05 AM No comments:

On this Wednesday, May 14 edition of the Alex Jones Show, Alex breaks down the latest Obama scandal after thousands of immigrant murderers, rapists, kidnappers and other convicts were released onto the streets of America. Rep. Lamar Smith (R-Tx.) said it would be considered "the worst prison break in American history, except it was sanctioned by the president and perpetrated by our own immigration officials." Joining today's show is economic forecaster and author Harry Dent on what people can do to protect themselves from a future economic collapse. Also joining the show are reporters David Knight and SSG Joe Biggs, who are on the scene in Virginia outside Fort A.P. Hill where the U.S. Army built a fake city, including a school and a Baptist church, to practice military occupation.
Harry Dent of HS Dent Investment Management explains why he predicts a market crash in the third quarter of the year and that the U.S. is headed towards bankruptcy. Stock Market.. an aging Bull Market? Real Estate Party Over? Invest In Gold? Europe Crash Impact? The Government Has To Fail... Survive and Prosper in 2013 with Harry Dent. Please share this article
at 12:04 AM No comments:

If you're thinking long term, it's not all about "stock picks"...
I recently attended the Stansberry & Associates Spring Editors Conference in Nassau, Bahamas. Every year, we come together to present our best ideas and hear from a few of our best contacts and industry insiders.
We threw around a lot of specific opportunities for making money... But those weren't necessarily the most valuable ideas we discussed.
After highlighting a handful of his top stocks, for example, one money manager (who asked to remain anonymous) started talking about the billionaires he has worked with in his career... and what he learned from them.
If you can take these ideas to heart, his list will be more useful than a hundred winning stock recommendations. Here it is...(more)
Please share this article
at 12:04 AM No comments:

The Real Purpose of the SEC: Porter Stansberry

The always popular and controversial Martin Armstrong, creator of the widely cited Economic Confidence Model, gave some interesting predictions for the market along with his thoughts on Putin and Russia in a recent Financial Sense Newshour interview. Here are some excerpts:
FSN: Martin, you have a wide following with investors and host large conferences around the globe. What are you telling investors right now?


“Well, I think the best thing to do is clearly stay in the United States right now. Get out of any emerging markets because what you are going to have is: China is rattling its sabers against Japan and South East Asia; you have all kinds of turmoil in Eastern Europe; and I think you're going to probably see that start to pick up quite sharply after September. So you don't want to be involved in those types of assets. I would stay home clearly.”  (more) 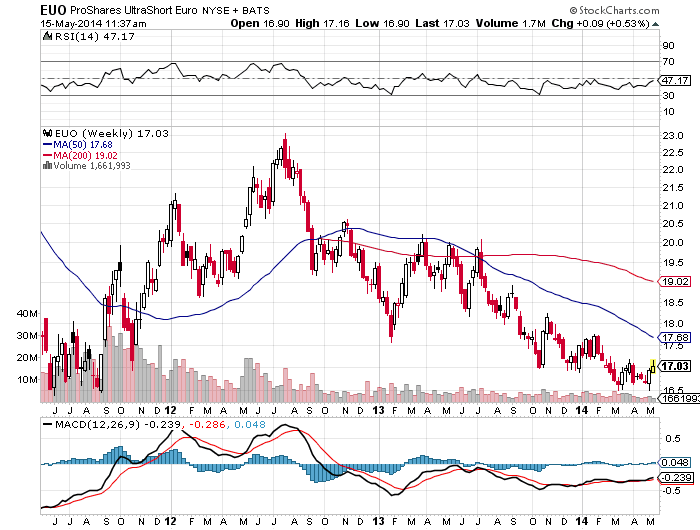 Longtime readers will know that I recommended shorting the euro as the financial crisis enveloped the world.

Well, today another crisis is looming... one that could be even more devastating for the currency than the banking crisis.

You see, the eurozone faces a ton of issues that it can't seem to escape. Including...


To top it off, the eurozone is fiercely nationalistic, which prohibits competition that would allow for lower prices.

Again, the easiest solution to these problems - the answer that politicians will always embrace first - is to push for even lower rates... maybe even negative interest rates, which has been suggested. (Negative rates occur when you have to pay the bank to keep your money on deposit.)

By flooding the market with more money, the value of the euro will decrease, causing inflation along with export growth.

There's no question that the euro is headed in that direction. Indeed, the euro's decline is inevitable, and a fall of 20% in the next 12 to 18 months isn't out of the question.

The good news is, there are two simple ways to profit as the euro declines...

Euro Play #1: ProShares UltraShort Euro ETF (EUO). This ETF allows you to capture twice the daily gains of the euro versus the U.S. dollar. Keep in mind that these ultra ETFs reset daily, and they don't produce cumulative gains.

Bottom line: The eurozone is in trouble. Its economies can't grow and it's running out of options. Shrinking the value of its currency is the only choice left.
Please share this article
at 12:03 AM No comments: