Whereas gold has forged ahead to new highs in recent weeks, silver has got bogged down working off overhanging supply, which is the price it is paying for having dropped like a rock last year, so that even though it has risen proportionally more than gold this year, it had so much ground to make up that it still hasn't broken out to new highs.
The long-term chart for silver looks chaotic compared to that for gold, not helped by the violent plunge last year which saw it drop from a high near $21 to a mere $8.50 at the low. It has spent this year to date slowly making up the lost ground which has involved it laboriously working its way through the overhanging supply set up by the plunge. The good news is that with the recent break above more concentrated resistance in the $16 area, there is now not that much more resistance to go before it breaks into the clear by advancing above last year's highs, and with gold looking set to continue to make strong gains, a breakout to new highs is probably not very far off. (more)
at 4:43 AM No comments: Links to this post

When the Dollar Rallies, the Market Will Crash

Interest rates. The Fed does not need slinky women in plunging necklines to peddle money. All it needs is low interest rates. When rates are pushed lower than the rate of inflation, the Fed provides a subsidy for borrowing. This is not as hard to grasp as it sounds. If I offered to give you $1.00 for very 90 cents you gave me in return, you would buy as many dollars from me as you could. The Fed operates the same way. It generates market activity by creating incentives for borrowing. Borrowing leads to speculation, and speculation leads to steadily rising asset prices. This is how the game is played. The Fed is not an unbiased observer of free market activity. The Fed drives the market. It fuels speculation and controls behavior by fixing interest rates. (more)

International Forecaster: A New System For The Privleged Is Not A Remedy For The Economy

...GS, which sometimes stands for Goldman Sachs, but which always stands for Gold Suppression, is having some public relations issues, and no wonder. The Vampire Squid marches on, continuing to suck the life blood out of all the "useless eaters," helping to prepare the way for a one world police state by assisting in the collapse of the world financial system while they make a filthy fortune along the way. Some day, they are going to choke on all the filthy lucre they have purloined from the public. Ahoy there, Captain Obama. There's a Vampire Squid swimming along the port side of the USS Banana Republic. Well then, what are you waiting for First Mate Geithner, hoist up the Jolly Roger in acknowledgement! ... (more)
at 4:17 AM No comments: Links to this post

Commercial and multifamily mortgage lending in the U.S. fell 12 percent from the second quarter to the third quarter and is down 54 percent from year ago levels, according to the Mortgage Bankers Association.

Apartment lending is down 40 percent. (more)

U.S. rail traffic remains sharply down from a year ago, a trade group said, but shipments in some industries have shown improvement.

Carloadings on major U.S. railroads in the week ended October 31 dipped 13.7 percent from a year ago, the Association of American Railroads said in its weekly report.

A quick, widespread recovery is unlikely as modest increases in rail traffic from week to week have yet to push shipments up to pre-recession levels. (more)

If Incomes are Down, Where is the Economic Spending coming from? Industrial Production Still Lower, Credit Contraction, and Average Work Week at Recor 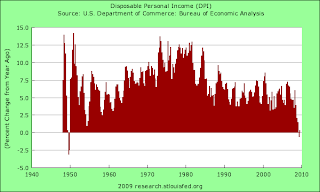 With 8 million jobs lost in this great recession, it is rather surprising to see so many people enter into a deep capture mode of believing in a quick and efficient recovery. If we look at data in the misery index, the average American has a hard time swallowing the jagged economic recovery pill. They look at their paychecks and see no recovery. They look at rising healthcare costs and see no recovery. They send their kids to colleges where costs are going up 8,9, or even 10 percent per year. The data simply does not reflect this actual reality. Are things better than say in March? Depends on what we look at. Sure, the stock market is up a record 60 percent but does your life feel 60 percent better? Is your pay up by 60 percent? What about your bottom line? If we look at disposable income for the average American, it has actually fallen. If it follows that two-thirds of our economy is based on spending, then where is this money coming from?

The gun that beat inflation 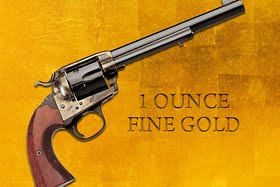 There is an old and apocryphal saying that "a good handgun is worth an ounce of gold" and it turns out to be true -- at least it has for the past 136 years.

Because it is basically unchanged after 136 years of continuous production and because there is a healthy, liquid market for it, a good example of this case can be made by tracing the price of "The Gun that Won the West," the Colt Single-action Army revolver. The venerable Peacemaker turns out to be a better gauge of inflation than gold is and a better investment. President Ronald Reagan even named a missile after it.

The correlation of gold and guns can be traced back at least to 1873 when Colt's Manufacturing Company of Hartford, Conn., introduced the most technologically advanced handgun of its time, a six-shot revolver that used metallic cartridges. The Army adopted it as its standard side arm, a position it held until 1892. The innovation of metallic cartridges made it easier to reload in a hurry. Reloading had always been an issue because it was slow, unwieldy and required some expertise. Now anybody could do it. (more)

As Foreclosure Nightmares Increase, Will More Homeowners Pay Off Their Bankers in Violence?

Anger and discontent are reaching a boil as a lethal combination of economic corruption and political collusion are deleveraged across the United States.

From recent rampages in Orlando, Fla., to mortgage-related torture in Los Angeles, certain members of the citizenry seem to have had their fill of being manipulated for the financial gain of others, and they're firing back with force.

And the situation threatens to burn hotter as the winter holidays -- always a peak period fof domestic violence, due mostly to financial stress -- approach to spark its frazzled strands. The economic crisis revealed late-capitalism's central offense: Human beings are being transparently treated if they were mere transactions. And they're going postal over it. (more)
at 3:40 AM No comments: Links to this post

That’s because he thinks that even at 9500, the Dow was overvalued. “We anticipate it will go … much further down,” Garrett told Newsmax. “We wouldn’t be surprised to see it back under 8000 before too long.”

Economic recovery is definitely going to be shaped like a W, not a V, says Garrett who considers the current rally to be “just a bear market recovery.” (more)

Jim Rogers on Bloomberg - Where to Invest