Gold Trends, Oil, and the US Dollar 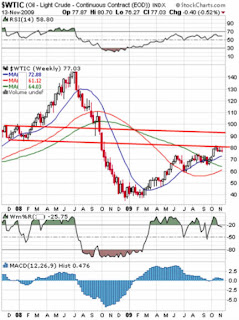 In this world we are faced with an ever changing landscape. Nowhere is it truer as soon as you learn the game, the rules are changed. For instance, we are told that gold is signaling an inflationary future coming for the USA, yet its long term interest rates are below the 4% level and short term rates are basically zero. How can this be? Who would lend money to a nation whose currency depreciates and pays almost no return on its debt?

Nations who depend on consumption from the USA have little choice but to extend credit or face economic contraction in their own economies. And while debt has reached 12% of GDP the foreign support of the dollar and treasuries continues for the United States. But there are changes going on. Most disconcerting is the fact that China has been rolling over its debt from the long term bond to the short term Treasuries, which basically pay zero. While there has been little fanfare over this development, one has to wonder why China would forgo a 2 – 3% rate of return in favor of a zero rate of return on investment. This much we know. They have moved their seat in the theater very close to the exit door. (more)

The Coming Collapse of the Municipal Bond Market

A money manager friend showed me an interesting research report by Frederick J. Sheehan titled “Dark Vision: The Coming Collapse of the Municipal Bond Market. This is a product of weedenco.com and available only to subscribers, but I will summarize it here.

Sheehan starts off by noting that a lack of panic by the ratings and government agencies does not indicate health for a financial market. He cites the fact that the Fed did not anticipate how bad the subprime collapse was likely to be and obviously the Moody’s and Standard and Poor’s ratings were ridiculous.

Sheehan notes that “spending is rising and revenue is collapsing” for all levels of government. Pension fund losses will require governments to double their contributions to pension plans (see my blog posting on public employee pensions). Spending is rising, e.g., in New York City from an average of $65,401 in compensation per public employee in 2000 to $106,743 in 2009. The number of full-time employees in NYC grew as well, despite falling school enrollment. The number of state and local government workers grew from 4 million in 1955 to 20 million in 2008 (5x growth, against less than 2X growth in U.S. population). Those workers receive an average of 43 percent more pay and benefits than a private sector worker. (more)
at 4:44 AM No comments: Links to this post

In just a week, Newmont Mining (NEM), one of the world's top producers of gold, saw its stock leap to 51.24 from 43. The jump is no surprise, since Newmont's third-quarter profits more than doubled as gold hit $1,100 an ounce. But there's something more intriguing: The speculation on Wall Street that China may be eyeing Newmont.

"The buzz is that if China wants to protect its currency and diversify its assets, it makes sense to buy Newmont," says Vincent Carrino of Brookhaven Capital Management, which owns stock. In 2008, Newmont's proven and probable gold reserves were 85 million oz., in such places as Nevada, Peru, and Australia. Carrino figures Newmont is worth 70.

China this year acquired a majority stake in Australia's OZ Minerals for $1.7 billion after an unsuccessful run at mining giant Rio Tinto (RTP). China's current No. 1 gold producer is China National Gold, accounting for 20% of the country's output. In 2007, China mined 9.7 million oz.—7% of the global yield. (more)
at 4:41 AM No comments: Links to this post

California has been the poster child of ineffective state government. Bickering politicians, constant spending, and budget deficits that baffle the economic bottom line. But California isn’t alone in this spend more than you earn reality. Last year, California had to patch up $60 billion in budget deficits. A large and historical sum no doubt. Yet the federal government ran a $176 billion deficit in one month alone! In October the federal government brought in $135 billion in revenues (taxes) and spent $311 billion. This is not the kind of math you want to be seeing. (more)
at 4:09 AM No comments: Links to this post

The number of Americans who lack dependable access to adequate food shot up last year to 49 million, the largest number since the government has been keeping track, according to a federal report released Monday that shows particularly steep increases in food scarcity among families with children.

In 2008, the report found, nearly 17 million children -- more than one in five across the United States -- were living in households in which food at times ran short, up from slightly more than 12 million youngsters the year before. And the number of children who sometimes were outright hungry rose from nearly 700,000 to almost 1.1 million.

Among people of all ages, nearly 15 percent last year did not consistently have adequate food, compared with about 11 percent in 2007, the greatest deterioration in access to food during a single year in the history of the report. (more)

ADL covering up for crimes of financial elites

The ADL is accusing the New York Times Maureen Dowd of anti-semitism over a recent op-ed titled "Virtuous Bankers? Really!?!" The article about corruption on Wall Street specifically involving Goldman Sachs. In a letter to the Editor in the NYT, ADL National Chair Robert G. Sugarman stated, "While one can agree or disagree with Maureen Dowd's portrayal of Goldman Sachs and other bankers (column, Nov. 11), her statement that "the bankers who took government money and then gave out obscene bonuses are the same self-interested sorts Jesus threw out of the temple" potentially raises one of the classic themes of anti-Semitism linking Jews and abhorrent money-lending practices. However unintentional, Ms. Dowd's invoking the New Testament story to illustrate our current financial mess conjures up old prejudices against Jews."

Dowd is right when she states that Goldman Sachs CEO "Blankfein’s trickle-down catechism isn’t working. Now we have two economies. We have recovering banks while we have 10-plus percent unemployment and 17.5 percent underemployment. The gross thing about the Wall Street of the last decade is how much its success was not shared with society." (more)

Poor man's gold may be an investor's treasure 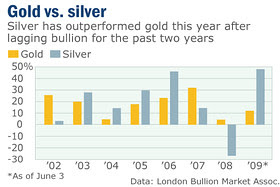 Silver's not so much a poor man's gold anymore and investors may soon realize that the white metal's the real treasure.

True, at $17 per ounce, silver is cheap -- trading around 60 times less than gold's record price of more than $1,100. But year to date, it's climbed 52% in value compared with gold's rise of around 25%, according to data from FactSet Research.

Silver is a precious metal, after all, one that has historically outperformed gold in a bull market and doubles as an industrial metal -- and supplies of it are depleting at a much more rapid pace. (more) 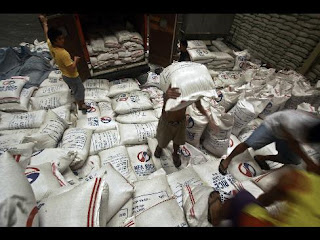 Rice prices have nowhere to go but up as drought in India and cyclones in the Philippines cripple harvests, according to the world’s biggest importer and the top exporter.

Rice may double to more than $1,000 a metric ton as dry El Nino weather shrinks output and the Philippines and India boost imports, said Sarunyu Jeamsinkul, the deputy managing director at Asia Golden Rice Ltd. in Thailand, the largest exporting nation. Prices won’t peak until March, said Rex Estoperez, a spokesman for the National Food Authority of the Philippines, the biggest importer. The agency issued a record tender for 600,000 tons last week and today called for bids for the same volume on Dec. 8 to secure grain before prices rise.