Late last month, Kyle Bass, managing partner of Hayman Capital, shared his thoughts in a video at the University of Virginia Darden School of Business Investing Conference with Professor Ken Eades.
It is a fantastic interview that echoes many of the things I have been saying about Japan for quite some time.


Interview Snips
Ken Eades kicks off the interview welcoming Kyle Bass mentioning that over the past few years his investment thesis has been then same. Eades then asks Bass to recap and review. what follows is Bass’ reply.
Thematically, the bottom line is the total credit market debt-to-GDP globally is 350 percent. It’s 200 trillion dollars’ worth of debt against global GDP of roughly 62 trillion.
It’s of our belief you are going to continue to see lower global growth, and you’re going to see certain countries hit the proverbial end-point or wall where they have to restructure their debt. We’ve been particularly dogmatic with our view there.
Investing around that particular idea is very difficult. As Dick Mayo [Chairman, Mayo Capital and Founding Partner of GMO] said today, it’s actually the most difficult time in the world to invest in his lifetime, and I would echo his comments. Investing in the environment that I am describing to you is the single hardest thing to do as far as investing is concerned over the last few decades.  (more)
at 12:07 AM No comments: Links to this post

Jim Rogers, What to Expect for 2013 in Investments & the Economy

To review Stericycle’s stock, please take a look at the 1-year chart of SRCL (Stericycle, Inc.) below with my added notations: 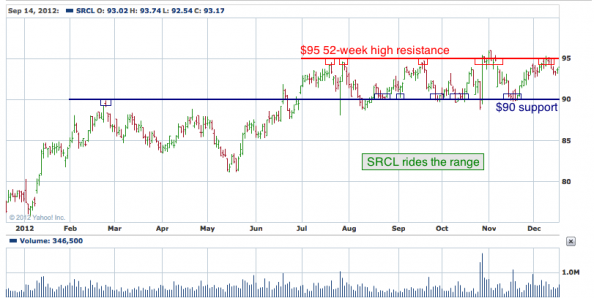 For the last (5) months SRCL has been stuck within a common pattern known as a rectangle. Rectangle patterns form when a stock gets stuck bouncing between a horizontal support and resistance. A minimum of (2) successful tests of the support and (2) successful tests of the resistance will give you the pattern. SRCL’s rectangle pattern has formed a $95 resistance (red) and a $90 support (navy). A break above $95 would also be a new 52-week high.
at 12:06 AM No comments: Links to this post

An American Reckoning, a preview:

The Simple Indicator Every Trader Needs to Start Watching Today

Systems have been used by traders for at least the past hundred years. Early systems were not automated but some were just as detailed as anything a trader could develop today. One of the best-known systems from the late 1800s is the Dow Theory [1]. Developed by Charles Dow, this trading system buys when both the Dow Jones Industrial Average (DJIA) [2] and the Dow Jones Transportation Average (DJTA) [3] are both at new short-term highs. The theory sells when both indexes break to new lows.

Dow Theory is based on the concept that the economy [4] and stock price movements are related. When the economy is growing, manufacturers should be profitable and the DJIA should be moving higher. The transports will [5] be bullish [6] when manufacturers are accepting deliveries of raw materials and shipping finished products to market [7].

In order to automate the system, precise definitions of high and low need to be used. In The Encyclopedia of Technical Market Indicators [8], Robert Colby, CMT, showed that a buy signal should be taken when the DJIA reaches a new 9-day high and the DJTA [3] sets a new 39-day high. According to test results shown in the book, this strategy outperformed a buy-and-hold [9] investment [10] by 5,637% during the 20th century.

While Dow Theory says we could see a bull market [17], the chart of IYT is less clear. In addition to breaking out to a new high, IYT is above its 26-week moving average [18].

The chart below also shows the Momentum of Comparative Strength (MoCS) indicator, which converts relative strength [19] (RS) to a MACD-style histogram. That indicator juts signaled a buy. After this signal, IYT has been up one month later 73% of the time.

On the negative side, RS is still below 70. Once that indicator moves above 80, the bullish breakout would be confirmed.

It is very rare to have all indicators in agreement, but RS is one of the most reliable indicators in the market, and until it is bullish, meaning it is above 80, traders should remain cautious. While this may seem like an ambiguous market call [20], it is actually reflecting a market that is at a potential turning point.

Major market averages are almost unchanged over the past nine months and are near the levels where they peaked in 2007. A significant price move is likely to begin soon and the RS of IYT could be the best indicator to watch for clues as to whether that move will be up or down.
Action to take: Watch for RS in IYT to confirm a bull market for stocks or signal a breakdown in the market.

In addition to the Dow Theory, I follow a number of other systems. My favorite is the 26-week rate of change [21] (ROC [21]) system that has been beating the market since it was first detailed at the end of May. This system doesn't give many trade signals because it tends to hold winners for several months.

There are no changes in the portfolio this week and it continues to hold ETFs in three asset [22] classes: 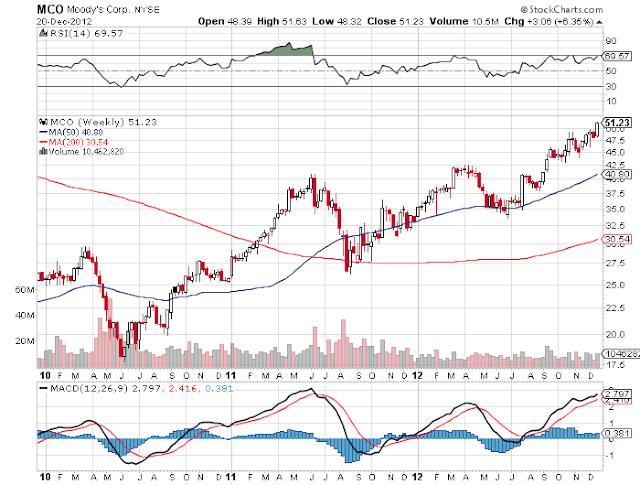 The "Chart of the Day" is Moody's (MCO), which showed up on Wednesday's  "52-Week High" list. Moody's on Wednesday posted a new 5-year high of $51.57 and closed +1.48%. TrendSpotter has been long since Nov 30 at $48.58. In recent news on the stock, Moody's on Dec 11 increased its dividend by 25% to 20 cents per share. Moody's on Oct 26 reported Q3 adjusted EPS of 75 cents, well above the consensus of 63 cents. Moody's, with a market cap of $11 billion, is a leading provider of credit ratings, research and analysis covering debt instruments and securities in the global capital markets
at 12:03 AM No comments: Links to this post

Still on the subject of Chinese stocks, the carnage on the stock market has been so pervasive that a lot of U.S.-listed Chinese stocks are now worth looking at. You still have to be very careful with this group, and I think it’s reasonable to say that you only want a small amount of exposure in the portfolio sense. The reason for this is in case the numbers are cooked, or an executive is doing something with the company’s assets that shareholders don’t know about. Confidence is just one of the risks you have to balance with Chinese stocks.
One company that I think is worth following now is Renren Inc. (NYSE/RENN), which has been going down on the stock market ever since it was listed. The company has approximately $2.30 a share of cash in the bank and, like most Chinese stocks, has no debt.
Renren is a social networking company providing a number of Internet platforms for users in China. The company is a serious growth story, but is still dealing with operating losses as it invests in its different web sites. Renren’s stock market chart is below: 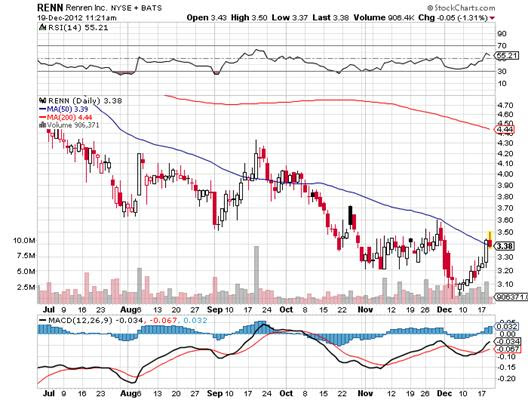 Chart courtesy of www.StockCharts.com
Another Chinese stock with excellent turnaround potential is E-Commerce China Dangdang Inc. (NYSE/DANG), which is another company bouncing off its all-time low on the stock market. This firm is kind of like an early-stage Amazon.com, Inc. (NASDAQ/AMZN) in that it operates an e-commerce web site selling books and general merchandise. The company isn’t yet profitable, but it’s growing like mad. Revenues in 2009 were just over $200 million. This year, they are expected to be over $800 million. The company’s stock market chart is featured below: 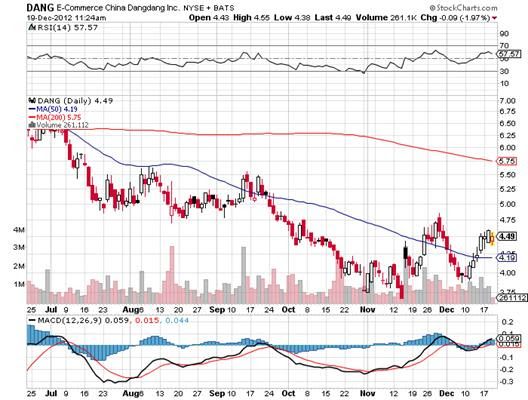 Chart courtesy of www.StockCharts.com
For the most part, institutional investors have left Chinese stocks, and this void has created a lot of opportunity. But, what is very difficult to estimate is what you might be able to expect in terms of a return on your investment. Anything can happen to these kinds of stocks, even the fastest growing companies. That’s why Chinese stocks are only for risk-capital play money. They’ve proven to be that risky.
The U.S. stock market is trending a little higher these days on hopes for policy solutions regarding the fiscal cliff. There really isn’t much other reason why the stock market should be moving up. The key over the near term for domestic equities is fourth-quarter earnings season. Oracle Corporation (NASDAQ/ORCL) always reports early among technology stocks, and the company recently beat the Street with its numbers. Earnings expectations for the last quarter of 2012 came down so much that we could be in for a number of “surprises” among all the managed earnings. Still, surprise or not, the growth isn’t that robust. I don’t expect anything from the broader stock market in 2013. Chinese stocks are their own group.
at 12:03 AM No comments: Links to this post