Actually, while Apple's technicals portend worse days ahead, most other arguments peg Apple stock as a buy right now

For the second time in six months, Apple Inc. (NASDAQ:AAPL) stock has fallen below $100.
Back in late August, it was a marketwide “flash crash” — resulting in a 1,000-point drop for the Dow Jones Industrial Average — that sent AAPL stock crashing lower, but just as quickly as AAPL fell to $92, it recovered to close above $100 on that same day. (more)
at 12:03 AM No comments:

The impact of a strong U.S. dollar 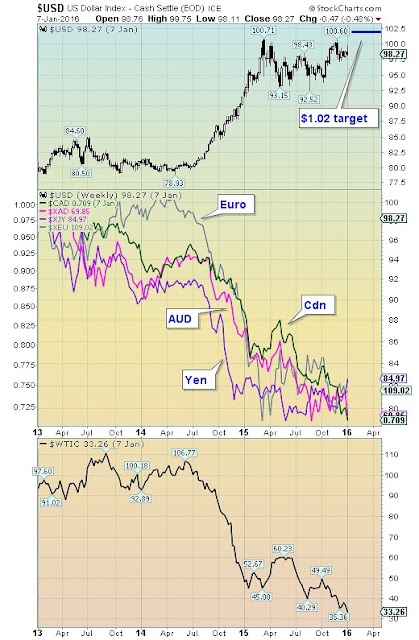 Impressive drivers continue to surface for the U.S. dollar. And the impact lingers on many fronts.
One measure is the recent positive U.S. jobs report. This adds to the dollar's already bullish tone as it dials up pressure on the Fed to raise interest rates in the months ahead.

2015 ended on a hiring spree with nonfarm payrolls up 292,000 in December keeping the unemployment rate at a solid 5%.

Annual GDP, a measure of the economic growth rate, is another positive marker.

However, as the U.S dollar continues to have positive tailwinds, the impact on other currencies is not so constructive.

The price of Light crude oil, another casualty of the rising US$, is off by a staggering 69% since mid-2014. Projections point $27.50 as the next downside target.

Bottom line: Positive drivers continue to advance the U.S. dollar verses other G9 currencies. Impressive employment gains and GDP numbers are just some of the markers that are pushing the US$ higher.

The USA is the first of the G9 economies that is feeling confident enough to begin rising its interest rates. And with solid fundamentals, the Fed will be under pressure to keep raising rates in the months to come.

In response, many world currencies and commodities will continue to feel strong headwinds in the months ahead.