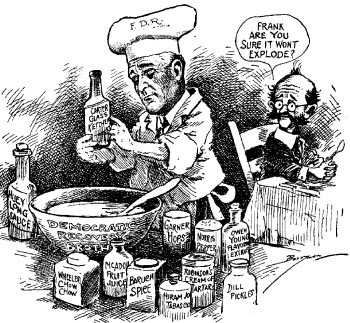 The U.S. government began to shut down for the first time in 17 years early Today, after a bitterly divided Congress over Obamacare defunding failed to reach any agreement as expected. What must be stated openly is that the “New Deal” of Roosevelt has actually destroyed the very fabric that formed society that nobody wants to look at no less discuss.

For centuries, people had children to provide for their own retirement. Family units were the social structure. The sad part of socialism is how this family unit was fundamentally destroyed by socialism. Once social security was created, children were relieved of the burden of taking care of their parents – that became government’s job. People were told to save conservatively. They salted away money often in government bonds. Now government has been so fiscally irresponsible, they have to keep interest rates low not to stimulate the economy, but to control their own perpetual deficits.  (more)
Please share this article
at 12:07 AM No comments: Links to this post

The Cheapest Stocks in the World's Cheapest Sector

Contrary to what you might see in the mainstream media, the world's largest stocks are still cheap.
That might surprise you... A lot of the biggest blue chips have delivered tremendous gains over the last two years. Home Depot, for example, is up 136%. Visa is up 118%.
But the 189 companies with a market value of $50 billion or more trade at a median 12.9 times forward earnings. That's not expensive. And there's one group of mega-cap stocks that's dramatically cheaper than the rest of the pack.
Let me show you...
As you dig into the value in large-cap stocks, one sector jumps out... energy companies.
Of the 10 major sectors, energy stocks are the cheapest by nearly every measure. Take a look...

The world's largest energy stocks trade for just 9.1 times next year's earnings estimates. That's a 29% discount to the entire group... and a 28% discount to the 10-year average price-to-earnings ratio (P/E) on U.S. energy companies. (more)
Please share this article
at 12:06 AM No comments: Links to this post WDC has formed a very clear down-channel chart pattern over the last (2) months. A channel is simply formed through the combination of a trend line support that runs parallel to a trend line resistance. When it comes to channels, remember that any (3) points can start the channel, but a 4th point or more confirms it. You can see that WDC has (5) points of channel resistance (red) and (2) points of channel support (blue). Following the WDC channel can provide you with both long and short trading opportunities.

The Tale of the Tape: WDC has formed a common pattern know as a channel, in this case, a down channel. A long trade can be entered on a pullback to the channel support, which at this point is near 57.50, or on a breakout through the channel resistance, currently sitting near $65. Short trades could also be placed at channel resistance or if WDC were to break below the channel support.
Please share this article
at 12:05 AM No comments: Links to this post

When metals were getting crushed over the last year, everyone hated them. When they bounced off their June lows, they loved them. That’s just the way the market works. But now what? Do we hate them or love them?
I’ve been in the camp over the past 4-6 weeks that metals are just a mess and it’s been best to stay away from them. And for the most part, that was a great call by me because I promise you I would have lost money getting chopped around in these things. But then this morning came around. I woke up to gold getting slaughtered and the more volatile Silver down, but not down as much? Really? Gold getting crushed and silver outperforming on Tuesday? That doesn’t sound right….
Well it just so happens that Silver, not only filled the August 12th gap, but that level also represents the 61.8% Fibonacci retracement from the June to August rally. So it got me thinking. Time to participate in metals once again? I’ve missed these guys….
Here is the chart of the iShares Silver Trust $SLV: 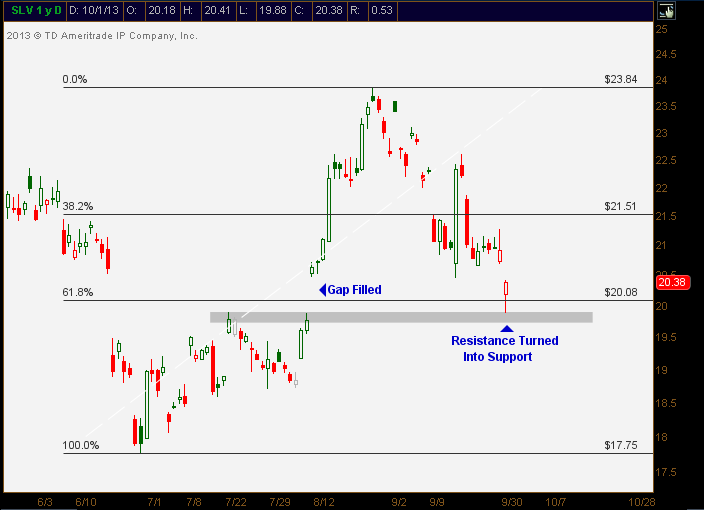 As you can see in the chart, sellers showed up at resistance just under $20 on both July 22nd and August 9th. Guess what Tuesday’s morning low was? Yup, the buyers came in just under $20. You really can’t draw it up any cleaner. We have nice polarity at former resistance as well as a key fibonacci retracement that couldn’t break.
This is just a clean easy trade as far as I’m concerned. We’re in it against those lows. If we roll over and that support fails to hold, then all bets are off.
Now, as far as targets go, that’s where this one gets tougher. I wish we had a clean price target where we can say, “ok once we hit that level, we’ll take profits”. But we don’t have a clean level, so we’re just going to take it one day at a time and gauge it’s strength by watching it’s day-to-day behavior.
Please share this article
at 12:05 AM No comments: Links to this post

Domestic Vehicle Sales Plunge; Miss By Most Since Jan 2009 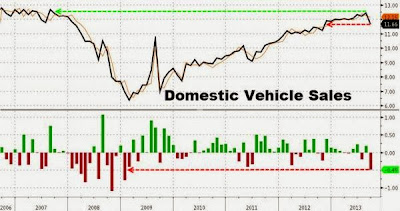 While the recent surge in the Baltic Dry Index was headlined as ‘proof’ that the global recovery was ‘on’, China is back, and every retiree should BTFATH, we recently noted, all was not at all it seems on the surface of this data. Fast forward a few days and we have had 2 China PMI misses (notably disappointing relative to their Flash prints) and now the Baltic Dry has plunged by its most in 11 months over the last 4 days. Of course, we’ve seen these kind of ramps and dumps before in the Baltic Dry - though it is odd that we don’t hear the cheerleaders as the price collapses.  (more)

With continued chaotic trading in the gold and silver markets, today King World News interviewed one of the top strategists in the world, Robin Griffiths of Cazenove out of London. Cazenove Capital is the appointed stockbroker to Her Majesty The Queen. The acclaimed strategist accused the US government of causing this smash in the gold and silver markets, and also spoke about what to expect next. Below is his powerful interview.
Griffiths: “What I would say about gold and silver is a lot of very big entities have a vested interest in those prices not going rocketing up right now. And I don’t think it takes an awful lot of money acting in paper gold to make the prices break down on a daily basis and that’s what we’ve seen….
Continue Reading at KingWorldNews.com…
Please share this article
at 12:03 AM No comments: Links to this post