With global markets continuing to gyrate along with gold and silver, today King World News interviewed Peter Schiff, CEO of Europacific Capital. When asked about the recent rally, Schiff responded, “Well the rally seemed to be inspired by the fact that Germany and France are claiming they have a solution to the banking problem. I don’t know that they have shown anybody what the solution is, but apparently that was enough for an oversold market to rally.” 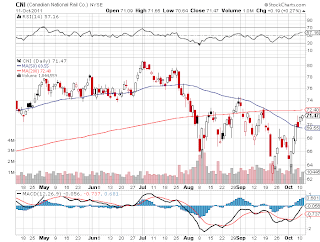 We believe many outstanding buying opportunities exist among undervalued Canadian stocks. We believe the following four offer excellent appreciation potential during the next six to 12 month.

Canada is an excellent place to invest right now because the economy is growing, banks are solid and the national debt is under control.

Canadian National is the most efﬁcient rail operator in North America with high proﬁts and low costs.

CNI currently trades at just 12.1 times forward 12-month earnings per share, with a dividend yield of 2.0%. CNI is a solid long term investment.

The company sells women’s pants, shorts, tops and jackets in 138 company-owned and four franchised stores in Canada, the U.S., Australia and Hong Kong.

The company will likely increase sales and earnings by 19% during the next 12 months. The stock, as measured by P/E, is expensive at 38.6 times our forward EPS estimate of 1.26, but far less than its 50.0 times EPS of a few months ago.

Potash Corp. of Saskatchewan (POT) is a leading producer of potash, nitrogen and phosphate fertilizers.

Critical demand for food in places like China and Africa will require more and more fertilizer to maximize crop production.

The company is spending $7.5 billion to enlarge its facilities, which will increase its fertilizer production more than 50% by 2015.

Larger global grain crops are boosting fertilizer demand, evidenced by Potash’s sales rise of 54% and EPS jump of 85% during the past 12-month period.

The company does not own or operate any silver mines, but purchases silver produced as a by-product of gold mining companies.

Silver Wheaton pays less than $4.00 per ounce of silver from gold miners such as Barrick Gold. Its contracts are immensely proﬁtable and will produce rapid revenue and earnings growth well into the future.

The price of silver has dropped signiﬁcantly during the past several weeks, but we expect higher prices in 2012. The recent decline in the stock price offers an excellent buying opportunity.

FREE ebook: Over A Barrel How The Coming Oil Crisis Will Destroy Life in America As We Know It

Over A Barrel
How The Coming Oil Crisis Will Destroy Life in America As We Know It
Download eBook (.pdf)

Watch live streaming video from marketclub at livestream.com
at 12:05 AM No comments: Links to this post 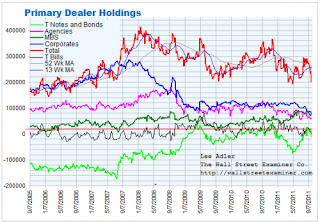 Two weeks ago I began to report to subscribers of the Wall Street Examiner Professional Edition Fed Report that foreign central banks (FCBs) had begun to engage in unprecedented levels of disgorgement of their massive holdings of US Treasury and Agency paper. Prior to this year, the FCBs had typically absorbed the equivalent of 25% of new US Treasury issuance month in and month out. That was effectively a subsidy of US financial markets. It lowered long term interest rates artificially and injected cash into the US markets and banking system.

Then about a year ago the FCBs began to slack off in their buying. In reality, that is what necessitated the Fed's program of Quantitative Easing. The Fed had to step in and fill the demand gap left by the FCBs gradually reducing their rate of purchases. Had the Fed not acted when it did, long term Treasury yields would have started to rise and along with them mortgage rates and other long term rates, something that the US economy and the US Government simply could not afford.

When the negative unintended consequences of the Fed's QE money printing, primarily skyrocketing commodity prices, exploded in Bernanke's face, he was forced to discontinue the program and allow the Treasury market to fend for itself. The Fed had convinced itself through its self-congratulatory in-house research, that there would be more than enough demand for Treasuries for the market to stand on its own without the Fed propping it up.

Ironically, the US bond market was rescued by the European sovereign debt and bank meltdown, so it appeared for a while that Dr. Bernankenstein might be right and his monster experiment would be vivified on its own. The European panic triggered massive capital flight that ended up, where else, flooding into the US, mostly into purchases of Treasuries. Not only could the monster walk on its own, it could actually fly! Once again the Treasury market benefited from an unusual subsidy, this one driven by fear. Bond prices flew into the stratosphere with yields sinking to record lows. (more)

How bankrupt governments will confiscate your gold

About two weeks ago, GoldMoney sent out an apologetic email to all of its Dutch customers. The email explained how the Dutch financial regulator (AFM) considered GoldMoney to be in violation of various licensing rules and compliance requirements.

Among other things, AFM indicated that GoldMoney was selling ‘investment objects’ without a license… something that they consider a heinous breach of their silly bureaucracy.

Now, there are so many technicalities involved here– whether physical metal constitutes ‘investment objects’ anymore than a collection of 80s action figures or a cellar of fine Bordeaux. Then there’s the jurisdictional issue– GoldMoney doesn’t even operate in the Netherlands, nor does the company sell its own inventory. Etc., etc.

None of these points seem to matter; the regulators have spoken, and as a consequence, GoldMoney is now closing the accounts of every customer living in the Netherlands.

It’s always troubling when governments go after firms like GoldMoney. The more signs I see, the more I’m starting to believe that we’re heading down a path where precious metals are once again confiscated, outlawed, or at least severely restricted in many countries.

Let’s start with the why. What possible sense would it make to reduce or restrict gold ownership?

It’s a total fraud… and like any good con, it depends on just that: confidence.

In order for a system based on -nothing- to perpetuate, it’s imperative that it commands the confidence of the people within it. And people in rich western countries have been programmed since birth to believe that the colored pieces of paper circulating around in their economies are intrinsically ‘valuable’.

It’s funny, because developing countries already know it’s a scam. They don’t trust their governments, and they don’t trust those silly pieces of paper either. Out here in Asia is a great example– most of the region is very gold-oriented. They use paper as a medium of exchange, but it’s a cultural norm to save with gold.

In fact, when I walked into an Internet cafe earlier today here in Thailand, I noticed quite a few people at the computers checking out live gold charts (from Kitco).

People in western countries are just starting to get it… and as more people peek behind the curtain to see the true crimes being committed, the system will be finished.

The gold price is a constant reminder that the fiat financial system is a con job. And the higher the gold price becomes, the more people become aware. The political establishment will do whatever it takes to maintain the status quo, and it’s possible that precious metals restrictions will become a tactic:

On the physical side, the US government buried some insane regulations deep within last year’s healthcare bill. The new rules required a mountain of paperwork such that anyone who purchased a single ounce of gold from a coin shop would have to submit a special 1099 form to the IRS.

(The rule was later modified under intense pressure from various lobby groups, but it still gives you a good idea of what these people are thinking…)

Then there’s the new Dodd-Frank legislation that makes it nearly impossible for US citizens to trade securities and commodities from overseas accounts beyond the reach of the federal government.

Then there’s the Liberty Dollar debacle in which the US government used obscure counterfeit laws to seize millions of dollars of silver coins that were owned by the firm’s customers!

Then earlier this year, the Financial Crimes Enforcement Network (FinCEN) issued new guidance requiring that US taxpayers who hold gold in certain offshore financial accounts report such holdings on their annual FBAR. Conveniently, this ruling put up a barrier for Americans to use GoldMoney.

We’re seeing signs of this as well. “Prominent” economists have been pounding the table against precious metals with vigor, and the propaganda ministry is focusing its efforts on gold’s recent price drop to make people believe that it’s dangerous to buy.

This recent media clip in which a reporter extols the virtues of the US dollar being backed by the federal government says it all. It’s already begun, and we should expect more.

Here are two incontrovertible facts: Westerners are petrified of Arab terrorists. The Arab world is a very gold-oriented society. It wouldn’t take much effort to link the two by suggesting (and planting evidence) that terrorists use gold to move money and finance their operations.

This will be surely be the next step… and if we start seeing this, you can bet your last ounce that restrictive controls are coming.

If you live in a broke western nation, whatever you do, don’t store your gold in a bank safety deposit box. Bankers are unpaid government spies, so you might as well hang a sign up that says “please seize my assets”.

Ideally you want to move your gold out of the country. We’ve talked about anonymous boxes in Vienna’s Das Safe facility in the past, as well as Hong Kong’s The Storage. Both of these are great options to buy and store gold.

With gold above $1,650 and silver near the $32 level, today King World News interviewed one of the most street smart pros, Rick Rule, Founder of Global Resource Investments, which is now part of the $10 billion strong Sprott Asset Management. When asked about the action in gold, Rule responded, “Background noise, up $40, down $40, absolutely irrelevant. Keep in mind this is all happening with a $1,500 gold base in place. The idea that equity markets should rebound because the Europeans may get their act together by printing $4 trillion in new counterfeit currency notes doesn’t matter to me. And the gold price up $40 or down $40 doesn’t matter to me.”

Everybody is asking where to now with the global financial markets. I thought it was worthwhile comparing the current behavior of the financial markets with the two recent crises, namely the great financial crisis of 2008/2009 and the minor one in 2010 when the sovereign debt crisis in the Eurozone developed.

I have charted the series starting with two months before each crisis developed and ended the series 11 months later. The respective series are as follows:

The VIX is following the same trend as in the 2008 crisis. It is likely to rise again before stabilizing.

The trend is similar to that of the 2008 and 2010 crises but milder and in line with 2010. The Index is likely to dip again in November, with a major threat of a deep sell-off in December.

The declining trend follows that of the 2010 crisis and is about to stabilize. There is a major threat of a drop in December if 2008’s trend repeats itself.

The declining trend follows that of the 2008 crisis but is milder. Further weakening is possible over the next two months. (more)