The economic focus this week is on the preliminary third quarter GDP report.

September Durable Goods Orders to be released at 8:30 AM EDT on Tuesday are expected to improve to 0.7% versus -2.4% in August.

October Consumer Confidence to be released at 9:00 AM EDT on Tuesday is expected to improve to 54.0 from 53.1 in September.

Preliminary third quarter GDP to be released at 8:30 AM EDT on Thursday is expected to increase to 3.0% from -0.7% in the second quarter.

September Personal Income to be released at 8:30 AM EDT on Friday is expected to be unchanged versus a gain of 0.2% in August.

September Personal Spending to be released at 8:30 AM EDT on Friday is expected to decline 0.4% versus a gain of 1.3% in August.

October Chicago PMI to be released at 9:45 AM EDT on Friday is expected to increase to 48.5 from 46.1 in September.

October Michigan Sentiment to be released at 9:55 on Friday is expected to increase to 70.0 from 69.4.

Canadian companies are prominent on the list of companies reporting third quarter earnings this week. 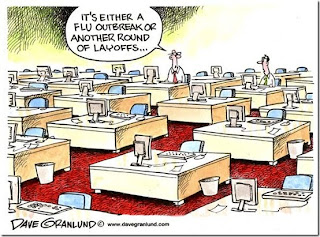 Louise Yamada with an extensive and very interesting audio interview. A great opportunity to see the markets from a technical trader’s perspective. Louise Yamada shares her outlook on gold, the US Dollar and the sectors that are either in structural bear or bull markets.
To listen click here
at 4:50 AM 1 comment:

Analysts have been warning for months that commercial real estate would be the next financial tsunami. Vacancy rates have hurt landlord receipts. Tenants are able to force lower rents in negotiations due to the rising vacancies. Some tenants are filing bankruptcy or walking away from leases completely. 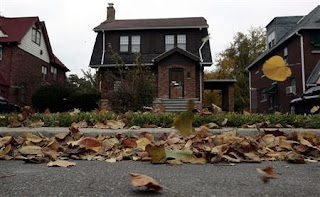 In a crowded ballroom next to a bankrupt casino, what remains of the Detroit property market was being picked over by speculators and mostly discarded.

After five hours of calling out a drumbeat of "no bid" for properties listed in an auction book as thick as a city phone directory, the energy of the county auctioneer began to flag.

There was tired laughter from investors ready to roll the dice on a city that has become a symbol of the collapse of the U.S. auto industry, pressures on the industrial middle-class and intractable problems for the urban poor. (more)

Top 10 States make up 55 Percent of United States GDP. 6 of the top 10 States have Unemployment Rates over 10 Percent. 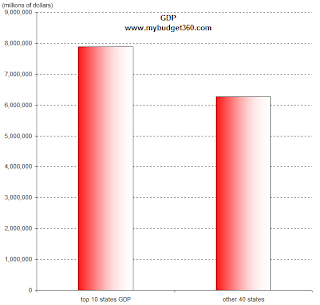 It should come as no surprise that the economic production of each state is not evenly divided. There are many variables including population, industrial base, and regional specialties. With this deep recession it is important to get an understanding of how things are divided in the United States. It is easy to get into the mode of thinking everything is evenly divided or the recession is being felt equally across state lines. It is not. Some states like California had historical housing bubbles that saw real estate prices in some areas triple in 10 years only to come crashing down. Other areas like Texas had minor real estate appreciation. In the United States 10 states make up 55 percent of all GDP. The U.S. in 2008 had a GDP of $14.16 trillion and these states produced $7.89 trillion of that amount. (more)
at 4:28 AM No comments:

Forget a jobless recovery. The economy may be entering a recovery with job losses.

Third-quarter estimates this week are expected to show that the economy grew for the first time since the quarter ending in June 2008. Despite the estimated 3 percent expansion and a stock market that has been on a tear since March, hundreds of thousands of people are still being laid off each month.

Eight million jobs have been lost nationwide since the recession began two years ago, and by some measures workers face the worst job market since the Depression. The average laid-off worker has been without a job for 61/2 months, a post-World War II record. Many of those workers will never recover financially. (more)

Percent of Permanent Job Losses at Highest in Over 30 Years

The Atlanta Fed’s macroblog has compiled a roundup of evidence showing that the economy is in a jobless recovery. It shows that jobs are scarce, that a higher than average number of jobs have been lost in small businesses (which is a bad sign), and that many workers have been forced into part time status.

However, the data point that really jumps out is this one — the dominant reason for unemployment in the current economy is permanent separation. Permanent separation is when a job is cut and it’s never coming back…versus temporary layoffs, quitting, and other types of job losses.

It’s a unique point because the percent of permanent job losses haven’t been this high in over 30 years, and as the article goes on to say, “Never, in the six recessions preceding the latest one, did permanent separations account for more than 45 percent of the unemployed. The current percentage stands at 56 percent as of September and appears to be still climbing.” (more)

Alarm bells are ringing for liner firms as one of the most accurate gauges of the container index fell for the first time in more than four months Friday. The China Containerised Freight Index, operated by the Shanghai Shipping Index, dropped for the first time since early June today. Despite lines reporting increased volumes and some being successful with rate increases this news will be a hammer blow for the industry. The CCFI takes data from the leading 20 lines operating out of China. Its numbers have been consistently in line with the fortunes of the container sector over the years, especially since China accounts for one in two boxes moved. With container shipping often a precursor of the world economy, the drop in the CCFI has some analysts suggesting the global economy could be in for a nasty double dip recession.

Source: SeatradeAsia Online
at 4:13 AM No comments:

Gold prices have soared and some are buying on fears that inflation will weaken the dollar even further.

Gold doesn't care about inflation, just if Washington is managing its economy well or not, says the president of Greenlight Capital.

“I have seen many people debate whether gold is a bet on inflation or deflation. As I see it, it is neither.

“Gold does well when monetary and fiscal policies are poor and does poorly when they appear sensible,” Einhorn told The Wall Street Journal. (more)
at 3:45 AM No comments:

As we've been writing about for what? 6-9 months now? The linguistics turn that www.halfpasthuman.com has been tracking for October 25/26 is nearly in vie as processing continues.
Just so you understand how this stuff works in a very general sense the October 'turn' was spotted in the last several data runs and may be as much as 85% economic in nature. But now that we're getting close, Cliff and Igor have been watching the data coming back from the forum scouring spiders which are sending in snips of interest to the servers, where in turn they are distilled and analyzed.
So, the latest from Cliff is:
"latest immediacy data shows it as occurring at 5:12 am 10-26-2009 (time zones are a bitch so let us just say east coast time) and will likely be wrong by about 6 hours as it may actually be 'effective' on the paris meridian (the old rose line). a small visibility spike occurs at 7:02 am on the 26th so damn early Monday morning...."
I plan to get up a little earlier than usual Monday to see how it looks 'going by'. It's always of interest not only to watch something in the 'rickety time machine' pop into reality, but more interesting to is do some propagation mapping.
What's that? Oh, you know: You can get a sense of who is playing 'follow the leader" and who the real leaders are when the Monday story hits (if/when it does at all - since we could be wrong).
Seeing as it arises out of 'globalpop', I am not really expecting it to be a USA-centered event. Maybe something in Asia (huge mega quake or financial lockup - something like that - or heaven forbid Israel takes out the Bushir reactor complex.)
Not only will Cliff & Igor get to see the change of language wash through the internet, but I will be able to see how the story pops and see how it goes from usually only one or two 'first hand' media to the rest of the MSM and then into the blogosphere. I figure if the timing's right, it ought to be on the tongues of about half the world's population by say Tuesday noon US time if we've got the timing clues right.