Today 54-year market veteran and analyst Ron Rosen sent King World News exclusively some outstanding charts and commentary for our global readers. This will give KWN readers an important snapshot of of the extraordinary roadmap he sees going forward for gold, silver and the HUI.
Below are the charts and comments from 54-year market veteran and analyst Ron Rosen:
Continue Reading at KingWorldNews.com…
at 12:07 AM No comments: Links to this post

To review Kimberly's stock, please take a look at the 1-year chart of KMB (Kimberly-Clark Corporation) below with my added notations: 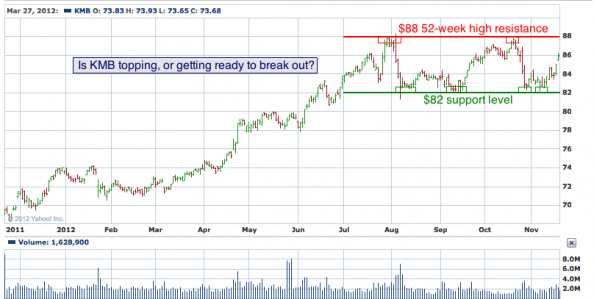 After trending higher for most of the last year, KMB has been consolidating within a large Rectangle over the last (4) months. Rectangle patterns form when a stock gets stuck bouncing between a horizontal support and resistance. A minimum of (2) successful tests of the support and (2) successful tests of the resistance will give you the pattern. For KMB, the Rectangle pattern has formed an $88 resistance (red) and a $82 support (green). A break above $88 would also be a new 52-week high.
at 12:04 AM No comments: Links to this post

Nothing like a 2% day to make oversold conditions evaporate.   As constantly noted, the most vicious up moves come within the context of selloffs, and yesterday was a wonderful example of that notion.  Friday morning there were extreme oversold readings in a multitude of secondary indicators, and just like that in a session and a half those have been relieved.  Now to be clear neutral is very different than overbought so keep that in mind.  One indicator I often post is seen below:

Since Mr. Fibonacci helped to mark an (at minimum) short term bottom, we can use him in reverse for potential bounce levels.   You can see why these vicious bounces in the market are so difficult – already the S&P 500 has recaptured ~35% of the amount it fell in two months in that 1.5 session time frame (mid day Friday til close Monday!)  But more broadly speaking a range of 1395 to 1420 are key Fibonacci levels for the bounce.  Note we now have a firmly turned down slope on the 50 day moving average which is net negative – although the 200 day remains in a slight upward motion.

Let’s also look at this for Apple (AAPL) since this is the stock that moves entire markets, especially those of a NASDAQ kind.  The stock fell an even $200 so the math is actually quite easy here, even without charts.  Note the 38.2% retrace also fills a gap created by the stock early in the month.

On a news front, France was downgraded late yesterday but markets don’t care right now – as always it is not the news, it is the reaction to the news.


Many traders now understand that buy-and-hold strategies can suffer from steep losses for years at a time. This knowledge was probably acquired from expensive first-hand experience. In a strong bull market that lasts for decades, buy and hold is a sound investment strategy. But in a long-term bear market like the one that has provided the backdrop for stocks since 2000, it is usually better to take profits when long-term sell signals develop.

Major stock market averages, like the S&P 500, have recently fallen below their 200-day moving averages (MA). Some have rebounded above the average, but throwbacks after a trading signal are common. A throwback occurs when the price is "thrown back" through the signal and generates short-term trades while the direction of the long-term trend is resolved.

Breaks of the 200-day MA, even with throwbacks, are often a sign that the long-term trend is changing. In this case, we could see a large price decline develop over the next several months. In an environment like this, it is important to take profits when the chart gives a sell signal like it is in The Coca-Cola Company (NYSE: KO).


KO is one of the classic examples of a buy-and-hold stock. It is one of the largest companies in the world with steady sales from a product that is among the most recognized brand names in the world. Its dividend is considered to be safe and the stock is a favorite of income investors, while long-term investors have been well rewarded by the company. In the bull market that started in 1982, KO gained more than 5,500%, plus dividends, but since reaching its all-time high in 1998, it is down about 16%.

Now, KO has formed a head-and-shoulders (H&S) pattern and fallen below its 200-day moving average (MA). In the chart below, the 40-week MA is shown because the pattern is easier to spot on the weekly chart. The trade strategy is the same whether a weekly or daily chart is used.

In a H&S pattern, three peaks are seen at the end of an uptrend. The head of the pattern is more than 115% above the lowest price KO reached in 2009. The pattern suggests the end of the trend in KO is coming at the same time the general trend in the stock market is turning down.

It is also possible that KO, and other stocks favored by buy-and-hold investors, could come under pressure from tax selling. As a classic buy-and-hold stock, many shareholders in KO have probably held their positions for years. Taxes on long-term capital gains are slated to rise next year no matter how the current negotiations over the fiscal cliff end. Because of the higher tax rates to come, some long-term investors may decide to take gains this year and free up capital to put into faster growing investment options.

Even without tax selling, KO seems destined to fall at least 10% based on the chart pattern and should reach $32 a share. That target is obtained by finding the distance from the top of the head to the neckline in the pattern and subtracting that from the neckline.

In a larger stock market sell-off, the price could go even lower. KO seems like a short trade candidate, but the dividend makes shorting the stock expensive. When you short a stock, you borrow the shares that you sell from your broker and are liable for the dividend payments in addition to other costs related to borrowing the stock. Given the high costs, a put option strategy could be more profitable.

February $35 puts are priced at about $0.43 and would be profitable if KO falls below $34.57, about 7% below the recent price. At the target price of $32, the puts would be worth $3. This is a low-priced way to profit from the H&S pattern in KO and a possible market decline.

GOLD/CRUDE OIL RATIO IS GOING DOWN

The GOLD/CRUDE OIL RATIO is likely to go down as gold under performs crude...in our blog of November 2 we pointed out that this ratio was looking toppy and now as you can see in the chart of the ratio that an important uptrend has been violated. The ratio is at 19.42 and needs to close through 19.41 to confirm the possibility that it could fall by almost 10 per cent to reach the +-17.75 support provided by the next uptrend and the 200 day moving average. The GOLD/OIL ratio is closely watched by goldbugs so any weaker performance in this ratio would be a disappointment to them.
The Global Seven Scorecard shows how CRUDE has risen from 0 to +4 as it signals that it is going to out perform the other components on the model...have a look at www.investrac.com/global-seven