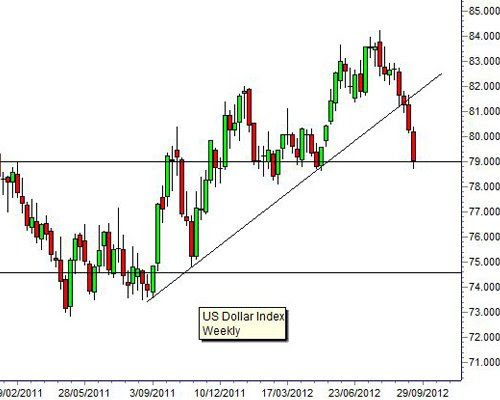 If you think the Federal Reserve’s quantitative easing will only affect the US dollar, think again. Now that the United States has officially begun it’s third round of money printing to the tune of at least $40 billion monthly, central banks around the world will also act to ‘defend’ their currencies in kind.

Moreover, because everyone is joining the fray, all of that extra money will make its way into key resource stocks and commodities, adding further upside price pressure to essential goods like food and fuel.

Quantitative easing is really another word for currency wars. A weak U.S. currency puts continued pressure on the Japanese Yen, the Chinese Yuan, the South Korean Won, the Australian dollar and other currencies. 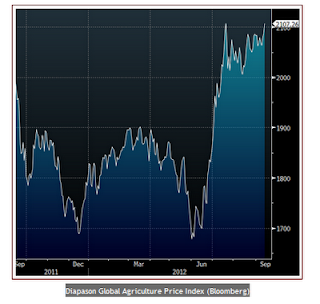 The chaos caused by food inflation and hunger back in 2011 was heartwarmingly marketed by propagandists as democratization. Remember the French Revolution and “let them eat cake.” The causa proxima was food inflation, not stupid remarks or films. I hypothesize: Food Price Index + FAO Hunger Index = Riots, Civil Wars and Revolutions.

The United Nations’ Food and Agriculture Organization also offers a Global Hunger Index that measures levels of food stress around the world. According to the 2011 index, a hunger level above 30 is considered extremely alarming, 20 to 29 is alarming and 10 to 19 is serious.

Among the countries to watch is Nigeria with a level of 16. About 10 percent of U.S. oil imports come from Nigeria, and it’s the sweet oil variety that can’t be substituted if disrupted. In 2011, Yemen, which is in open disorder and a completely failed state, had a hunger index of 25. Angola, another oil producer, had a hunger index of 27 and considered be in the “extremely alarming” category. Cameroon, a small African oil producer, had a score of 18. That country was severely impacted by food riots during the 2008 commodity bubble. Both Bangladesh and India were ranked 24. Both countries were impacted this year by a poor monsoon period, which normally brings much-needed rain for crops. Trouble spot Pakistan is 21.

Credit card balances decline by 22 percent since their 2008 peak 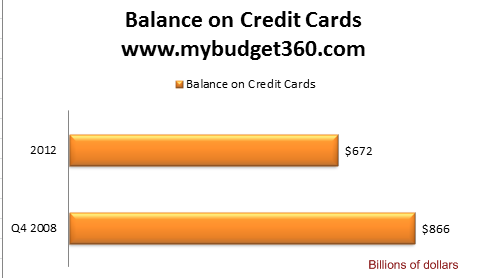 Credit cards have been used as a lifeline and a way to live beyond one’s means in the United States for many years. Yet the current environment of deleveraging is hitting credit cards hard. The outstanding balance on credit card debt has reached a level last seen over a decade ago. This is positive since many were simply using credit cards as a method of spending money they did not have. Yet with access to debt becoming more restricted for households, how many people that once had credit cards have shifted to safety net programs like food stamps? It is impressive to see how the epitome of American debt spending in the credit card is contracting in this current environment. Americans are simply in the process of deleveraging and credit cards are one of those items that signal that debt growth does have a maximum tipping point.

Today acclaimed money manager Stephen Leeb told King World News that despite pullbacks, “Silver will blow right through $100 and continue higher.” Leeb also warned about coming inflation, “We’ve got to wake up or this could become total chaos.” Here is what Leeb had to say: “It’s going to be chaotic going forward. Look at what’s happened already. A major figure in the US was quoted last night as saying that 47% of the US eat by grace of government. We are already chaotic, Eric, but things will become even more chaotic.”

Endeavour Silver Corp., a mid-cap silver mining company, focuses on the growth of its silver production, reserves, and resources in Mexico and Chile. The company has three producing silver mines in Mexico, the Guanacevi Mine in the state of Durango, and the Bolañitos and El Cubo Mines in the state of Guanajuato. It also holds interests in exploration projects in Mexico, including the Guadalupe Y Calvo project, Parral project, Arroyo Seco project, the San Sebastian project, Panuco project, and Lourdes project. The company was founded in 1981 and is headquartered in Vancouver, Canada.

Please take a look at the 1-year chart of EXK (Endeavour Silver Corporation) below with my added notations: 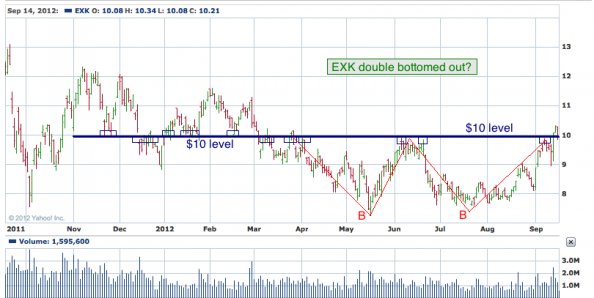 After trending lower for most of the year, EXK formed what appears to be a Double Bottom (red) price pattern. The pattern is as simple as it sounds: Bottoming, rallying up to a point, selling back off to a similar bottom, and then rallying back up again. As with any price pattern, a confirmation of the pattern is needed. EXK would confirm the pattern by breaking up through the $10 resistance (navy), which has also been an important level overall to the stock whenever it has been reached. As you can see, EXK confirmed the Double Bottom last week.

Keep in mind that simple is usually better. Had I never pointed out the Double Bottom pattern, one would still think this stock is moving higher if it simply broke through the $10 resistance level. In short, whether you noticed the pattern or not, the trade would still be the same: On the break above the key $10 level.
at 12:04 AM No comments:


GoldMoney’s James Turk interviews Félix Moreno de la Cova, who is a studied economist, trader and GoldMoney contributor. They talk about the recent action in the precious metals and currency markets.

With the announcement of QE3 by the Federal Reserve last week the prices for gold and silver continued to surge higher. However Félix points out that September is traditionally a strong month for the metals which is why they might have rallied even without further monetary stimulus. He states that after a year of consolidation the stage is now set for much higher prices.

He points out that the competitive devaluation of the major currencies is continuing which in the end will lead to the destruction of all fiat currency. While the new liquidity injection by the European Central Bank helped to boost the markets in the short term and caused the euro to rally against the dollar he expects that the markets will soon again start to focus on the fiscal problems in Europe – none of which have been resolved yet.

They emphasise the extraordinary situation of negative interest rates and point out that gold prices are far from being overvalued right now despite the fact that gold is flirting with new all-time highs in euro terms. Félix is also extremely bullish regarding silver, though pointing to the high volatility. He states that accumulating precious metals will continue to be a great strategy going forward.

A Bankrupt World Is An Unstable World

Remember when our problems were mostly just financial, when the scariest possibility was Greece leaving the eurozone and a few zombie banks evaporating? Those were the days.

This week, geopolitics — that is, guns, bombs, and ideology — pushed finance off the front burner. In the East China Sea, for instance, everyone has inexplicably become obsessed with a few barren islands and is apparently willing to trade blood for rocks:

“Major Japanese firms have closed their factories in China and urged expatriate workers on Monday to stay home ahead of what could be further angry protests over a territorial dispute that threatens to hurt trade ties between Asia’s two largest economies.”

HIW is at the apex of a right triangle and volume is picking up in what appears to be a buildup prior to a breakout. Recently it flashed a buy signal from our proprietary Collins-Bollinger Reversal (CBR) indicator, and its MACD issued a buy signal last week.

The target for HIW is $36, and combined with its generous dividend could provide an annual return of more than 6%. HIW’s long-term target is $40-plus.