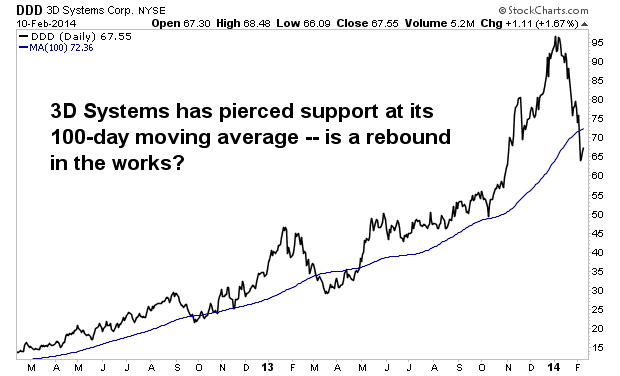 There are often two phases in the trajectory of a hot stock. The first phase is when growth prospects are pushing shares higher.

That encapsulates the rapid rise and sudden plunge for 3D Systems (NYSE: DDD), which after a meteoric rise in recent years, has stumbled badly in 2014 and is now below its 100-day moving average.

​After nearly reaching the $100 mark in early January, shares began to lose altitude in ensuing weeks and plunged sharply last week after the company reported disappointing fourth-quarter results.  (more)
at 12:04 AM No comments: Links to this post

This Quiet Bull Market Is About to Break Out

Commodity bulls are going to make a lot of money this year.
Agricultural commodity prices have fallen hard over the past three years. Some of them are down as much as 70% from their 2011 highs.
But that trend is reversing in 2014. Prices have bounced off the bottom... And many commodities are on the verge of breaking out into new uptrends.
It started last month with coffee... 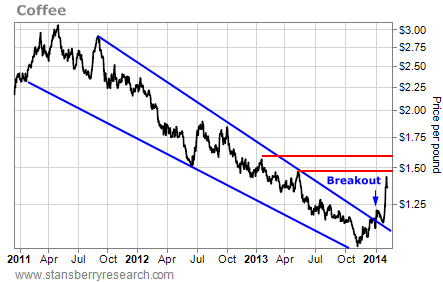 The price of coffee bottomed at $1.00 last November. It hit $1.45 last week. That's the first target price we pointed out when coffee broke out in January. And it's a 45% increase in just three months.
Other commodities are starting to show the same sort of potential. Look at this chart of the PowerShares Agricultural Commodity Fund (DBA) – an exchange-traded fund made up of 17 different agricultural commodities... 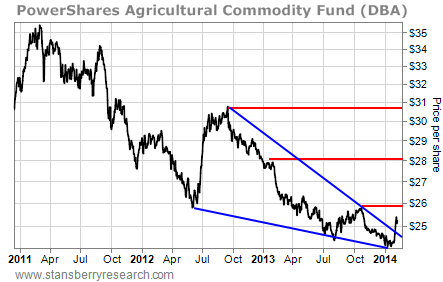 DBA has broken out to the upside of a long-term falling-wedge pattern (the blue lines). It's approaching its first resistance level at about $25.70. That's a logical place for the price to pull back a bit after such an extended move higher.
Traders should use any decline back down toward the breakout point of the wedge at $24.50 as a chance to buy. A breakout move from this sort of long-term wedge pattern often signals the reversal of a bearish trend into a bullish trend. And it usually leads to much higher prices.
Over time, DBA should approach its 2013 high near $28 per share. It may even challenge its 2012 high at the top of the chart, just above $30.50 per share.
Agricultural commodities have quietly kicked off a bull market this year. Traders should be looking to buy on any pullbacks.
Please share this article
at 12:04 AM No comments: Links to this post