So, what is technically going on here as the US Federal Reserve finally eases its heavy, over grown foot from the most unprecedented, bond-energized, economic accelerator in the history of the world? Here are a few observation after Friday (one month after QE was eased from $70B to $60B).
I readily admit that the Fed’s intervention process is still actively working, but I would hold forth that it is clearly NOT influencing the markets as in the past. Also, technically the equity markets needed a break from their over extension, and as of this last week many trend lines are now broken.  So, to keep things a bit simple, I am focusing on ONE aspect of the markets today – volatility.

The VIX (see the Chart above here) and other volatility measures are currently basing. They have remained elevated for 5 to 6 days now (which is unusual). In fact, on Friday they moved higher despite over $4 billion in POMO. Large POMO days usually arrive with a severe crush on volatility. I suspect that we could easily see the VIX near 23 to 25, and the RVX near 27 to 30 during February. I am not predicting here, but I am warning other traders. I mention the latter volatility index (RVX), because I have personally been heavily trading the IWM (small cap’s). If you are a day trader, take a look at it – action has been juicy.
Despite many upward intra-day equity market thrusts throughout the last two weeks, volatility has slowly but surely crept upwards (RVX, VXN, VIX). It is this slow crawl (with any absence of prior topping spikes) that should concern bulls here.  Each day the equity markets sell into the final minutes (while volatility cannot find a top yet). We are also seeing accompanying MM (market maker) tactics such as market futures being extremely manipulated outside of trading hours. And on Friday, there was a 30 point spread between the NQ and NDX all day. The MM’s cannot maintain these illusions forever, so I personally still favor the downside here with sporadic POMO bounces.
In closing, I have been away from trading and blogging for several months. I will disclose that 2013 was a year when many close to me suddenly transitioned over to the other side – including my father, an uncle, a long time mentor, two family friends (who I grew up with), and four of my personal friends. It was a lot to process, so I took time off from the markets. However, now in the new year, I am becoming more focused on trading again, so you may see a sporadic blog post by me here on Trading With Zen. And in the tradition of this blog’s name, with my bearish paws together and a slight bow of my head, I bid you “Namaste!”
Please share this article
at 12:05 AM 1 comment: Links to this post 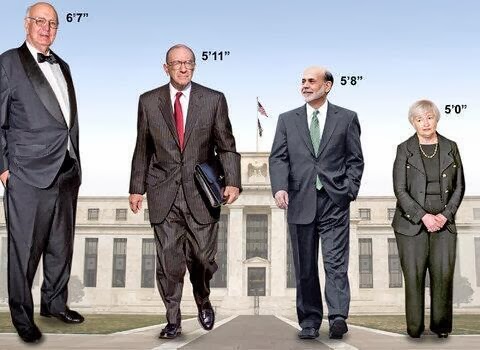 Methanex Corporation produces, supplies, and sells methanol to petrochemical producers and distributors. The company also purchases and re-sells methanol produced by others. Its methanol is a clear liquid commodity chemical that is used to produce traditional chemical derivatives, including formaldehyde, acetic acid, and various other chemicals. The company’s methanol is used in energy-related applications; for blending into gasoline, as a feedstock in the production of dimethyl ether, which can be blended with liquefied petroleum gas for use in household cooking and heating, and in the production of biodiesel; and to produce methyl tertiary-butyl ether, a gasoline component, as well as used into olefins applications. In addition, it operates a fleet of methanol ocean tankers with a capacity ranging from 3,000 to 100,000 deadweight tons.
To review Methanex’s stock, please take a look at the 1-year chart of MEOH (Methanex Corporation.) below with my added notations: 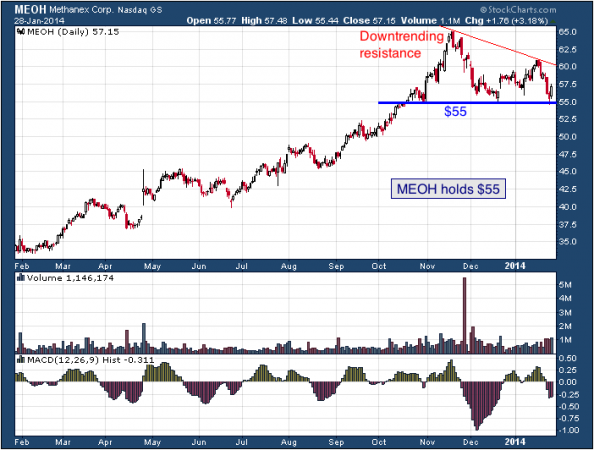 MEOH has formed a key level of support at $55.00 (blue) over the last (3) months. In addition, the stock has created a down trending resistance starting from the middle of November (red). These two lines combined have MEOH stuck trading within a common chart pattern known as a descending triangle. At some point, the stock has to break support or break its string of lower highs.

The Tale of the Tape: MEOH has formed a descending triangle pattern. A short trade could be made on a break of the $55.00 support level. A break through $60.00 would break the down trending resistance and would set up a potential long trade.
Please share this article
at 12:03 AM No comments: Links to this post

The era of Bitcoin mining on the GPU is dead. A year ago, a single Radeon graphics card could crank out a reasonable fraction of a Bitcoin in a single day. Today, that same GPU earns a thousandth of a Bitcoin in 24 hours, generating little value while consuming a substantial amount of power. The shift to ASICs for Bitcoin mining mirrors the shift from CPUs to GPUs, but the market isn't content to just turn those mining rigs off — not when there's an alternative currency available for which ASIC miners do not exist.

That alternative is Litecoin — and there's reason to think that buyers have emptied the shelves of AMD's Radeon hardware to build mining platforms. First off, there's the fact that you can't find a high-end Radeon in stock at the moment. Newegg and Amazon are both out of stock, while over at Amazon, the lowly AMD Sempron 145 — a single-core, 2.8GHz chip with a $29.75 price — is the 5th most popular CPU.

Further proof of this trend is the Litecoin network hash rate, is shown here:

Clearly Litecoin miners are coming online, and they're coming online en masse. Many of these are undoubtedly Bitcoin miners switching over now that GPUs are no longer cost effective, but some of these systems are probably driven by new miners.

Litecoin confirms transactions faster (every 2.5 minutes, rather than every 10 minutes for Bitcoin) and it contains more coins — 84 million coins will be found in total under the LTC protocol, as opposed to 21 million for BTC. Bitcoin and Litecoin prices tend to move together; Bitcoins stratospheric leap over the past month (it's down from a high of $1200 but trading at $873 as of this writing) has created an odd situation where it's easier to mine Litecoin and then convert LTC to BTC then it is to just mine BTC to start with.

Why bother installing CPU-mining malware on thousands of machines, when you can just break into someone's Amazon cloud computing account and create a well-managed datacentre instead?

This week, a software developer discovered someone had done just that, and made off with a pile of litecoins on his dime.

Melbourne-based programmer Luke Chadwick got a nasty shock after receiving an email from Amazon. The firm told him that his Amazon Key (a security credential used to log on to Amazon Web services) had been found on one of his Github repositories.
backed extension cable shenzhen msi r9 280x how to build a litecoin rig namecoin crypto mining high risk profit
Litecoin vs. Bitcoin, who win? It is more like a comparison between gold and silver. These are the top two cryptocurrencies by market cap if you don't include Ripple (XRP). Recently Bitcoin (BTC) had a market cap of $8.48 billion and Litecoin (LTC) was at $485 million.

Litecoin is based upon the Scrypt hashing algorithm and Bitcoin is based on SHA256D. Miners are incentivized with bounties. For each Litecoin found the current reward is 50 LTC and the maximum number of coins in exisitence is capped at 84 million. For each Bitcoin discovered, the reward is down to 25 BTC and will continue to be halved on a regular basis until 2040 when the maximum supply is reached capped at 21 million.

Mining cryptocurencies is a post in itself. Briefly, it involves using freely dwnloadable software run on dedicated hardware or cloud computing power to solve complex calculations. The calculations get harder over time and the rewards get reduced as well. Miners are rewarded or discovering blocks which are added to a block chain every 10 minutes. Currently it may make more financial sense to try to mine LTC rather than BTC. Please share this article
at 12:03 AM No comments: Links to this post