Please bookmark us
at 12:08 AM No comments: Links to this post

What Could Happen In The Wheat Market

Down trending Market
The Wheat market is definitely in a downtrend right now, and if we look at the 6 month chart we stand at $7.42 a bushel as of the close of last week. If we break $7.20 a bushel, then there are going to be a lot of sell stops positioned to sell Wheat lower to the next level of support at $6.84 a bushel. If this level fails to hold look out below as $5.85 is the next major level of support on the five-year weekly continuation chart and should hold.

Support Levels
Now Wheat should bounce around the $7.00 a bushel area, probably first busting through it, and then spiking above it as price tries to find its equilibrium after establishing a new low. And obviously $6.00 a bushel provides a level of support being both a round number, which is heavily guarded, and near the two year low in the contract. This is another area where I would expect Wheat to first push below $6.00 a bushel, then spike above it several times before making a strong run at the $5.85 level. 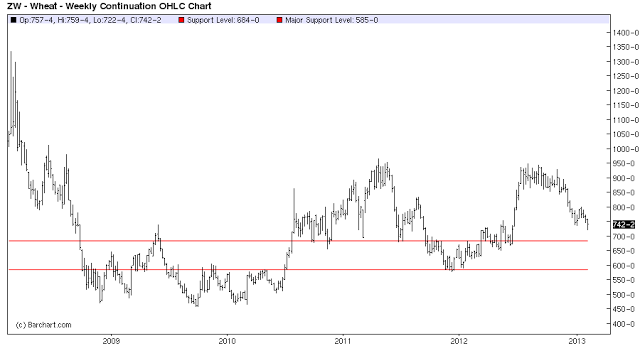 Retail Apocalypse: Why Are Major Retail Chains All Over America Collapsing? 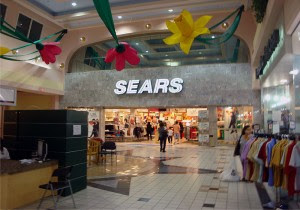 If the economy is improving, then why are many of the largest retail chains in America closing hundreds of stores?  When I was growing up, Sears, J.C. Penney, Best Buy and RadioShack were all considered to be unstoppable retail powerhouses.  But now it is being projected that all of them will close hundreds of stores before the end of 2013.
Even Wal-Mart is running into problems.  A recent internal Wal-Mart memo that was leaked to Bloomberg described February sales as a “total disaster”.  So why is this happening?  Why are major retail chains all over America collapsing?  Is the “retail apocalypse” upon us?  Well, the truth is that this is just another sign that the U.S. economy is falling apart right in front of our eyes.  Incomes are declining, taxes are going up, government dependence is at an all-time high, and according to the Bureau of Labor Statistics the percentage of the U.S. labor force that is employed has been steadily falling since 2006.  The top 10% of all income earners in the U.S. are still doing very well, but most U.S. consumers are either flat broke or are drowning in debt.  The large disposable incomes that the big retail chains have depended upon in the past simply are not there anymore.  So retail chains all over the United States are now closing up unprofitable stores.  This is especially true in low income areas.
When you step back and take a look at the bigger picture, the rapid decline of some of our largest retail chains really is stunning.
It is happening already in some areas, but soon half empty malls and boarded up storefronts will litter the landscapes of cities all over America.
Just check out some of these store closing numbers for 2013.  These numbers are from a recent Yahoo Finance article…
Best Buy
Forecast store closings: 200 to 250
Sears Holding Corp.
Forecast store closings: Kmart 175 to 225, Sears 100 to 125
READ MORE

Why Now's the Time to Kill the Mortgage Interest Deduction

The fiscal-cliff compromise on New Year's Day made substantial changes to existing tax law and permanently implemented a number of decade-old tax breaks for the vast majority of taxpayers. Yet even though some lawmakers have argued that the tax increases they agreed to marked the full extent to which they were willing to concede for the sake of higher government revenue, many believe that further revenue-generating measures may come in future battles over sequestration, the debt ceiling, and the passage of a federal budget.
One place that many policymakers have looked to as a potential source of revenue is to eliminate the mortgage interest deduction. With the housing market having suffered so greatly in the past five to seven years, fears that taking away the deduction would lengthen housing's decline deterred lawmakers from seriously considering cutbacks on mortgage interest. But if there were ever an ideal time to get rid of the deduction, it's now, because a number of factors are lining up perfectly to make its disappearance as painless as it's ever going to be. (more)

While the G-20 and the G-7 haggle among each other, all (with perhaps the exception of France) desperate to make it seem that Japan’s recent currency manipulation is not really manipulation, and that the plunge in the Yen was an indirect, “unexpected” consequence of BOJ monetary policy (when in reality as Richard Koo explained it is merely a ploy to avoid the spotlight falling on each and every other G-7/20 member, all of which are engaged in the same type of currency wars which eventually will all morph into trade wars), Europe’s energy powerhouse Norway quietly entered into the war. From Bloomberg: “Norges Bank is ready to cut interest rates further to counter krone gains that interfere with the inflation target, Governor Oeystein Olsen said. “If it gets too strong over time, leading to inflation that’s too low, we will act,” Olsen said yesterday in an interview at his office in Oslo.
Continue Reading at ZeroHedge.com…

How Does 41% of World's Copper End Up in China?


Please bookmark us
at 12:02 AM No comments: Links to this post