Netflix $NFLX: The Most Overvalued Value on the Street 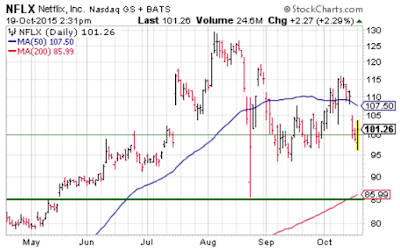 Netflix (NFLX) stock slapped the bulls in the face last week, or did it?
The company announced that it had fallen short of Wall Street earnings estimates by a penny when it earned 7 cents per share for the latest quarter.
As we all know by now, the stock immediately shed about 10% to trade back to $100, where it sits just below now.
So the question is, do you buy, hold or sell from here? (more)
at 12:03 AM No comments: Links to this post

Skechers U.S.A., Inc. designs, develops, markets, and distributes footwear for men, women, and children, as well as performance footwear for men and women under the Skechers GO brand name worldwide. It operates through four segments: Domestic Wholesale Sales, International Wholesale Sales, Retail Sales, and E-commerce Sales. The company offers casual footwear, including boots, shoes, and sandals for men, as well as oxfords and slip-ons, lug outsole and fashion boots, and casual sandals for women; dress casuals, seasonal sandals and boots, and relaxed fit casuals for men and women; casual fusion line for young men and women under the Skechers USA brand.
Take a look at the 1-year chart of Skechers (NYSE: SKX) below with my added notations: 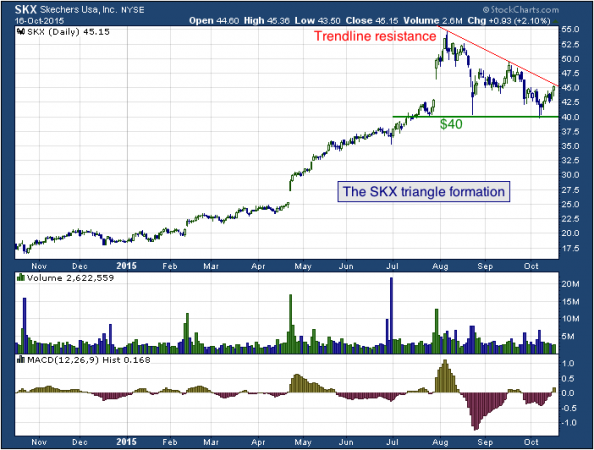 SKX has formed an important support level at $40 (green) over the past three months. In addition, the stock is declining against a short-term, down trending resistance level (red). These two levels combined have SKX stuck within a common chart pattern known as a descending triangle. Eventually, the stock will have to break one of those two levels. 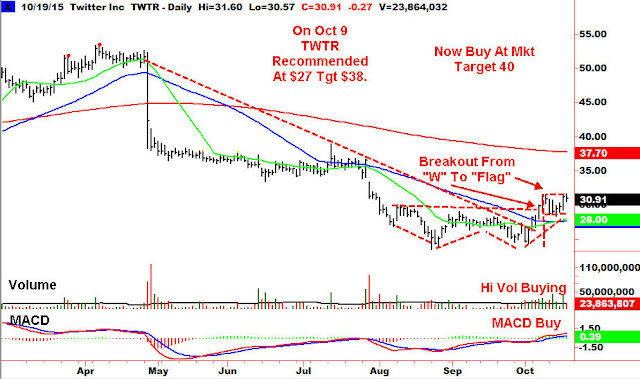 Twitter Inc (TWTR) — I recommended TWTR stock as the Oct. 9 Trade of the Day based on a bullish chart pattern, along with the company’s ability to double its revenues since its November 2013 IPO and finally turn a profit.

On Oct. 13, the social media company announced it would lay off up to 336 employees, or about 8% of its workforce. New management said the restructuring is part of a plan to increase efficiency and savings will be invested in growth areas.

Twitter also preannounced it expected Q3 revenue and earnings to meet or exceed the high end of its previously projected range. The company is scheduled to report quarterly results on Oct. 27.

The news prompted S&P Capital IQ Equity Research to reiterate its “strong buy” on TWTR stock.
As I mentioned earlier this month, shares completed a “W” double-bottom reversal from a bear market that began in late April at over $55.

Following my buy recommendation, TWTR stock broke from the “W” into a bullish “flag.” The top of the flag is at Monday’s high at $31.60. The formation is supported by higher-than-average buying volume and very low selling volume.

Initial resistance is at the 200-day moving average at $37.70. If the company delivers a strong earnings report next week, we can expect this resistance level to be pierced.

Buy TWTR stock at the market with a short-term trading objective of $40 for a potential gain of almost 30%. Traders should enter a stop-loss order at $28.

Investors may also want to buy shares as a long-term hold in the information technology sector.