Lindsey Williams Urgent Update: Derivatives Collapse & JP Morgan The coming collapse.Derivatives Market Collapse Coming Soon!The Economy is about to collapse due to the derivatives market. The US Dollar will collapse by the end of 2012 and Obama may not win the coming election. Lindsey reveals his latest DVD series "Secrets Of The Elite" which includes interviews with 4 top elite financiers, on the economy gold and silver. Who is Lindsey Williams : Pastor Lindsey Williams, who has been an ordained Baptist minister for 28 years, went to Alaska in 1971 as a missionary. The Transalaska oil pipeline began its construction phase in 1974, and because of Mr. Williams' love for his country and concern for the spiritual welfare of the "pipeliners," ; he volunteered to serve as Chaplain on the pipeline, with the subsequent full support of the Alyeska Pipeline Company. Because of the executive status accorded to him as Chaplain, he was given access to information documented in his eye opening book, The Energy Non-Crisis. After numerous public speaking engagements in the western states, certain government officials and concerned individuals urged Mr. Williams to put into print what he saw and heard, stating that they felt this information was vital to national security. Mr. Williams firmly believes that whoever controls energy controls the economy. Thus, The Energy Non-Crisis.
at 12:08 AM No comments: Links to this post

The warning shots have begun. I will tell you that this week has been heavy in the financial world, as I predicted that it would be from my last update till the winter. The reverberations of the JP Morgan $2 Billion dollar derivative trade loss is playing out and the fissures have finally began to manifest on the foundations of the world market. What you will see in the next few weeks is continued talks and hearings about financial regulations and other such stall tactics. This is all a cover and a ruse. The $2 billion dollar loss is just a smoke screen to further hide the truth of the $2 billion loss from MF Global. Which I will tell you from my sources Jamie Dimon and JP Morgan Chase were the sole beneficiaries of that "Loss" . In truth JP Morgan has taken delivery and full liquidation of MF Global assets, thus the $2 billion derivative loss is no big deal for the following reasons:

1- Americans and most MSM talking heads do not understand derivatives, thus it is easy to throw out cliches, axioms and jargon with cries for more regulations. Thus Dimon and his cronies at JPM know that they will skate free from all litigation. After all he was once again voted in as CEO by the JPM board. Why? Because he covered the loss of JPM trades with MF Global's "missing" $2 billion. JPM knew about the derivative loss for months. (more)

We Are Nearing a Panic Buying Opportunity in Mining Stocks

The rout in junior resource stocks just took another serious leg down...
We were watching the TSX Venture Exchange index – the benchmark for small exploration and mining stocks. We identified two bearish milestones.
We blew through the first one in late March. We just crashed through the second on Monday.
Now things are going to get really dangerous for investors...
The Venture is down 46% from its March 2011 high. It has dropped below its 120-day moving average (DMA), a standard trend measurement. And as of Monday, it's below its October 2011 low, a major breakdown...

With prices down so far, you might think it's time to bargain shop. But it's likely things will get worse before they get better... (more)
at 12:07 AM No comments: Links to this post

These could be the stocks to avoid in a euro meltdown

The average stock in the S&P 500 is down more than 6.5% since the April 2nd market peak. We ran our decile analysis on the index focusing on international revenues to see how much Europe and other parts of the world are impacting US stocks. To run the analysis, we broke the index into deciles (10 groups of 50 stocks each) based on the percentage of revenues that each index member generates outside of the US, and then we calculated the average change since 4/2 of the stocks in each decile.

As shown below, the decile of S&P 500 stocks that generate the largest portion of their revenues from outside the US are down an average of 11.1% since the April 2nd top, while the stocks that generate all of their revenues domestically are down an average of just 3.7%. If Europe's problems continue, this trend should continue, although we're probably due for some sort of reversion to the mean since the divergence is so wide.

To track international and domestic revenues for S&P 500 and Russell 1,000 stocks, become a Bespoke Premium member today and access our International Revenues Database.

Jim welcomes back Joe Dancy to discuss the energy markets. Joe sees the completion of new pipeline projects in Texas narrowing the spread between WTIC and Brent crude, which could lead to price hikes in gasoline prices. Joe also expects crude oil and food prices to remain highly correlated, and up-trending over the next several years, which should be a very positive environment for companies in both sectors.

Canada’s banks, ranked the soundest on the planet by the World Economic Forum, aren’t immune to collapses triggered by falling housing prices, according to the government official implementing new mortgage rules.

Previous failures of Canadian financial institutions were due to bad real estate lending and sharp falls in housing prices, and these can happen again, Vlasios Melessanakis, manager of policy development at the Office of the Superintendent of Financial Institutions, wrote in documents obtained by Bloomberg News under freedom-of-information law. The last failure in Canada was in 1996.

“Canada is not immune,” Melessanakis wrote March 21 in internal notes responding to a posting on a mortgage-industry website. “Just because nothing happened in Canada in 2008 (a U.S.-centered crisis), does not mean that Canada is not vulnerable to a housing correction now.” (more) 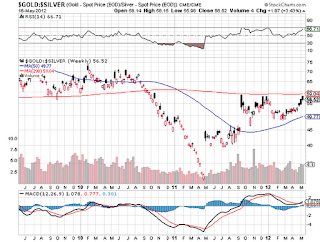 Silver rarely outperforms gold on the ‘up days’ to the same degree it under performs on down days. Sure, on up days silver often rises faster on a percentage basis – but on the down days silver gets HAMMERED, and often at a ratio of 20 to 1 or worse.

Based on worldwide mining data we know that on an annual basis there is only 9 times more physical silver being pulled out of the ground than gold. So why is the silver to gold ratio nearly 56 to 1? It’s a geological fact: SILVER IS PRECIOUS. Silver is also horrifically manipulated by the criminals at JP Morgan. The cartel is working overtime because they want you to give up, sell your silver and go away – never to darken JPM’s door again. END_OF_DOCUMENT_TOKEN_TO_BE_REPLACED 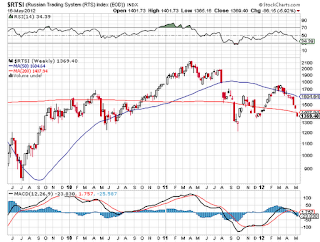 The Russian markets' drop has been more severe than other European emerging economies over the past two weeks because of the country's dependency on oil prices, which have fallen 12 percent this month. Oil prices, in turn, have fallen on fears Greece may leave the euro currency union, causing turmoil in European markets.

Uncertainty about the makeup of Russia's new government has also been fueling investor anxiety.

Officials predicted that the outflows would decrease this year and blamed worries over political instability in Russia linked to the December parliamentary and the March presidential elections.

The Greek elections were confusing on multiple levels and this may be the catalyst that pushes Greece out of the European Union. Aside from the obvious economic issues, which was my primary focus, the confusion created by the press questioning Greece's ability to form a new government left me positively dumbfounded. Here in the U.S. it's a simple matter of counting up the votes and inaugurating the winner. Greece is a parliamentary republic, which means the President is ultimately decided by the 300 member Parliament.

The inability of either of the primary parties, who both favor austerity measures, to win a majority of Parliamentary seats further muddies the political waters and this is the cause of the, "Greece has failed to form a government" confusion. Greece is now going through the bargaining process with each candidate trying to win enough Parliamentary votes from the other parties to meet the two third's vote necessary to become President. Currently, neither of the primary parties, New Democracy or Pasok has been able to do it. The anti austerity radical and left wing parties that secured a record proportion of the popular vote have also failed in their turns to corral the necessary votes. This forces a second round of voting, which will require three fifths of the vote to win and will be held next month. Finally, if they are unable to reach a three fifth's majority, the Parliament is dissolved and a new election is held. The new President will be the one who gets the most votes. (more)