BioMarin Pharmaceutical Inc. develops and commercializes pharmaceuticals for serious diseases and medical conditions in the United States, Europe, Latin America, and internationally. Its commercial products include Vimizim, an enzyme replacement therapy for the treatment of MPS IV A, a lysosomal storage disorder; Naglazyme, a recombinant form of N-acetylgalactosamine 4-sulfatase for patients with mucopolysaccharidosis VI; Kuvan, a proprietary synthetic oral form of 6R-BH4 used to treat patients with phenylketonuria (PKU), an inherited metabolic disease; Aldurazyme used for the treatment of patients with mucopolysaccharidosis I, a genetic disease; Firdapse, a form of 3,4-diaminopyridine used for the treatment of Lambert Myasthenic Syndrome, an autoimmune disease.
Take a look at the 1-year chart of BioMarin (NASDAQ: BMRN) below with my added notations: 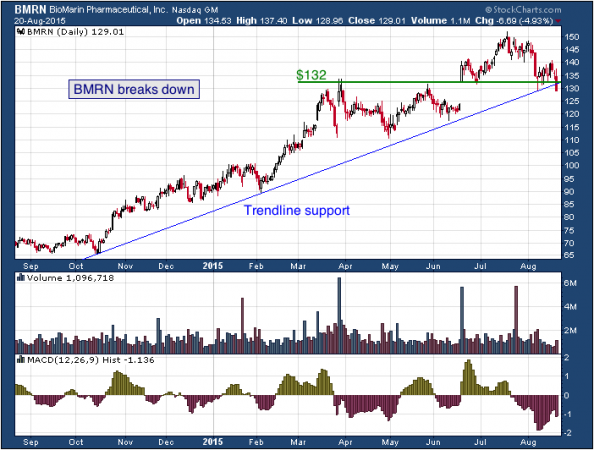 Over the past year BMRN has been slowly climbing higher. During that time the stock had also formed a nice trend line of support (blue). Always remember that any (2) points can start a trend line, but it’s the 3rd test and beyond that confirm its importance. BMRN’s trendline is definitely important. Yesterday the stock broke that trendline, while also breaking its key level of $132 (green).

The Death Of Petrodollar Is Near, Prepare For The Collapse: "V" The Guerrilla Economist 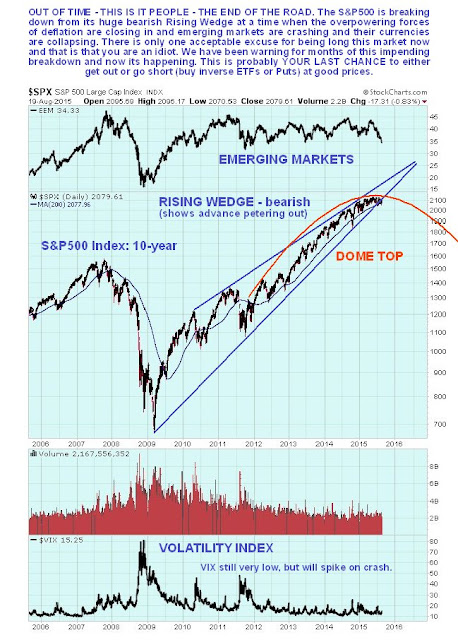 There are various reasons, both fundamental and technical, to believe that a market crash is almost upon us. This crash will affect virtually all world markets, including and especially the big Western Markets which have thus far escaped the devastation already afflicting the developing markets. Here we are going to focus on US markets, but they will all get taken down – European markets including the UK, and Far Eastern markets such as Hong Kong and Japan.

The fundamental reasons for a market crash now are big and obvious – the ravages of deflation and depression brought about by extremes of debt which must cut into corporate profits – in Japan the debt situation is now hopeless, the Sovereign debt crisis set to crush Europe and probably destroy the euro, the collapse and implosion of the monstrous debt fuelled bubble in China which is already underway, an accelerating currency crisis in the Far-East exacerbated by the recent Chinese devaluation of the Yuan, and the collapse also already underway in Emerging Markets. Given that US markets have been driven to giddying heights by the combination, among other things, of maxed out margin debt and stock buybacks, it is clear that a crash of perhaps unprecedented proportions in on the cards. So much for the fundamentals, since we are more concerned with timing, we now turn to consider the latest charts.(more)
at 12:03 AM No comments: 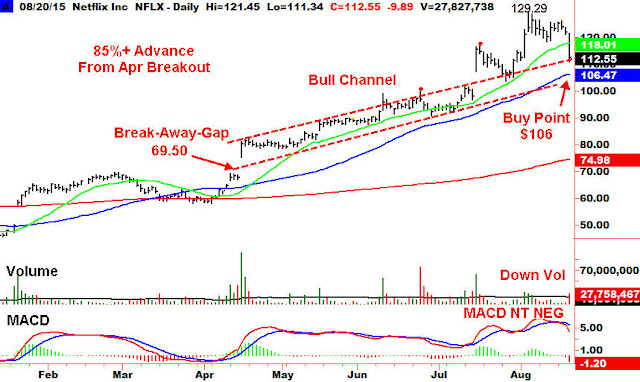 Netflix Inc (NFLX) — This popular streaming video service reported its subscriber count jumped 31% in Q2 from a year ago to 65.6 million globally. Of those, 42 million are in the United States, where Netflix sees the potential addressable market as being in the 60 million to 90 million range. It is also quickly capturing international market share with over 23 million customers in about 50 countries. It looks to reach 200 countries by 2016. 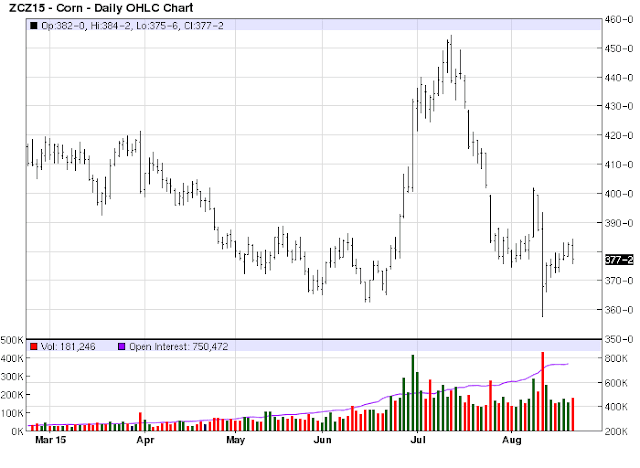 Corn Futures--- Corn prices traded higher for the 2nd consecutive trading session closing around 3.82 a bushel up another 4 cents as I’m now recommending a short position placing your stop above the 10 day high of 4.01 risking 18 cents or $900 per contract plus slippage and commission as the chart structure is starting to tighten up and will start to improve on a daily basis starting next week as prices have now rallied $.25 since last Wednesdays low of 3.57 as the commodity markets still look very weak in my opinion.

Corn prices in my opinion are overpriced due to the fact that we will have another tremendous crop here in the Midwestern part of the  United States as I think the last week was just a kickback as prices  filled the gap around $4.00 in last Monday’s trade as I think prices are headed lower with many of the commodity markets including crude oil and sugar prices, so continue to play this to the downside taking advantage of rallies as the chart structure and the monetary risk will be lowered here in the next couple of days.

This summer has flown by as usual but I see no reason to own grains or any other commodity at the current time especially due to the fact that Brazil is going to produce another record crop in corn and soybeans so maintain the proper stop loss while maintaining the proper risk management of 2% of your account balance on any given trade as I’ve not been in the corn market for a couple of months but at this point I think a downturn is coming upon us especially with harvest around the corner. TREND: LOWER –CHART STRUCTURE: IMPROVING
at 12:02 AM No comments: