The Week Ahead: Bubble Top or Buying Opportunity?

Many analysts feel we're witnessing a bubble formation, like that which formed, and burst, in 2000, but MoneyShow’s Tom Aspray shares why he feels it's too early to make that call, given the differences between the two markets.

The long awaited Twitter IPO did better than expected, as it closed Thursday 70.8% above the initial offering price. The S&P futures had turned lower by the opening, and closed very weak. It appeared that someone was paying attention to the financial networks and their segments on whether it was a “stock market bubble.”

This discussion may have been in reaction to comments on October 29, by BlackRock’s Chief Executive Officer Laurence D. Fink, who said “Fed policy is contributing to bubble-like markets, such as the surge in stock prices.” BlackRock manages a reported $4.1 trillion in assets, which makes it the world’s largest money manager. (more)

Steel Stocks Up 45% in Two Months... Much More to Come

In September, I told you to buy steel stocks.
At the time, steel was the most hated sector in the world. Flagship names like U.S. Steel and AK Steel were down an average of 75% since early 2011. Those are brutal returns considering the S&P 500 was up 30% in the same time frame.
I told you that if these companies reported any good news, we would likely see huge short-term gains. And that's exactly what happened...
Since my essay, U.S. Steel and AK Steel reported solid quarterly results. Plus, we've seen positive global economic data over the last few months. As a result, these two names have rocketed higher. Shares are up an average of 45% in two months. 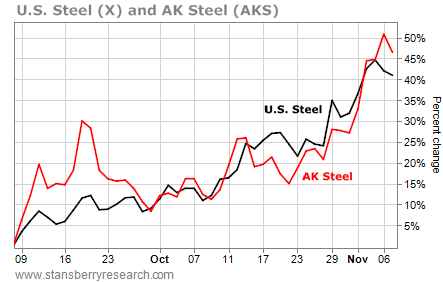 After such huge returns, I would usually advise taking profits off the table. However, these stocks have much more upside. (more)
Please share this article
at 12:06 AM No comments: Links to this post

The 7 Cheapest Markets in the World Right Now 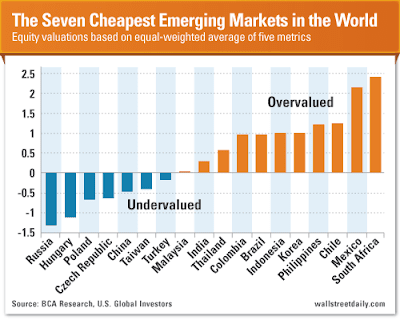 Let the great debate over whether or not the U.S. stock market is getting frothy begin! 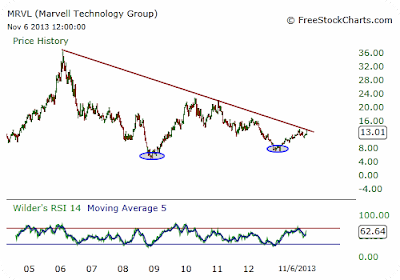 Bermuda-based semiconductor company Marvell Technology Group (NASDAQ: MRVL) staged a promising breakout move on Tuesday, Nov. 5, on the back of the announcement that private equity firm Kohlberg Kravis Roberts & Co. (NYSE: KKR) acquired a nearly 5% stake in the chipmaker.
Before the news was released, based on Marvell's market cap at Monday's close, a 5% stake in the company would have cost about $296 million. One source, who asked not to be identified, said KKR views MRVL as undervalued and had conversations with the firm's CEO, Sehat Sutardja.
The involvement of KKR, a firm that is known for its successful leveraged buyouts, now also makes such a move a possibility with MRVL. Other major holders of the stock are the CEO and his brother, with a combined 20% stake, and David Einhorn's Greenlight Capital, which owns 9%.  (more)