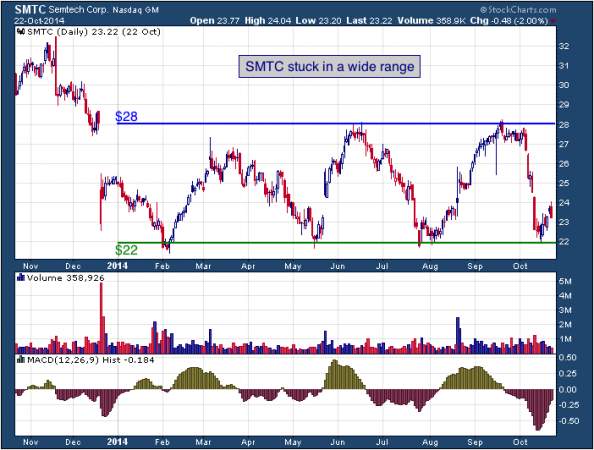 SMTC has been trading in a large, sideways range for the last 10 months, while forming a common pattern known as a rectangle. A minimum of (2) successful tests of the support and (2) successful tests of the resistance will give you the pattern. SMTC’s rectangle pattern has formed a $28 resistance (blue) and a $22 support (green). At some point the stock will have to break one way or the other.

The Tale of the Tape: SMTC is trading within a rectangle pattern. The possible long positions on the stock would be either on a pullback to $22, or on a breakout above $28. Short opportunities would be on a rally up to $28, or on a break below $22.
Please share this article
at 12:04 AM No comments: Links to this post

Charts Say Semi Stocks Are Headed for a Deeper Decline

Semiconductor stocks fell sharply from their mid-September highs before rebounding in the past few trading sessions along with the oversold bounce in the broader market. But they now look overbought in the near to intermediate term, presenting traders with an opportunity to make quick profits on the short side.
When markets get volatile, it pays for traders to reduce their average position size, widen stop-losses and profit targets, and generally try to play the swings in the broader market as opposed to focusing on individual stocks.
When it comes to volatile sectors, such as semiconductors, trading an ETF rather than a single stock can be a good idea regardless of broader market volatility.
Looking at the weekly logarithmic chart of the Market Vectors Semiconductor ETF (NYSE: SMH), note that the recent sell-off took it right back down to its late 2008 uptrend line.

A closer look reveals that upside momentum, as represented by the Relative Strength Index (RSI), topped in July while price continued to rise into the September highs. This type of multi-month negative divergence often doesn't end with a quick sell-off. Rather, the selling typically occurs in at least two waves.(more)
Please share this article
at 12:03 AM No comments: Links to this post

Home Prices Drop in 69 of 70 Chinese Cities; Did the Pool of Greater Fools Run Out?

China eased purchase restrictions last month ending its four-year campaign to contain home prices. And what a ridiculous campaign it was. Prices are down less than 1% this month and less then 1% year-over-year.
Bloomberg reports China Home-Price Drop Spreads as Easing Doesn’t Halt Fall.

Prices dropped in 69 of the 70 cities in September from August, the National Bureau of Statistics said in a statement today, the most since January 2011 when the government changed the way it compiles the data. They fell in 68 cities in August.
Continue Reading at GlobalEconomicAnalysis.Blogspot.com…
Please share this article
at 12:03 AM No comments: Links to this post 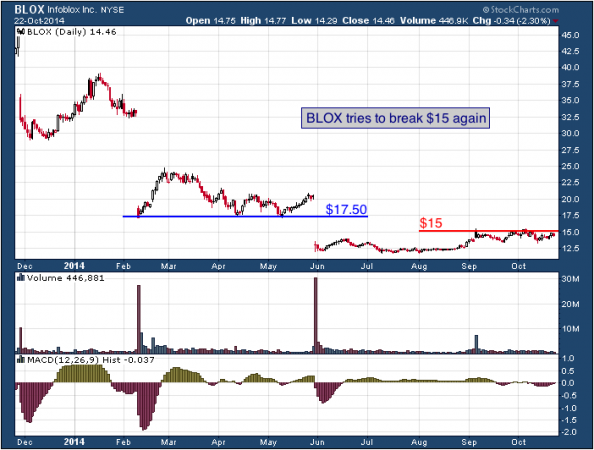 BLOX peaked back in January at $39 and lost over 70 percent of its value from there. The stock seems to have bottomed out over the last 5 months, and over the last two the stock has commonly hit a very important level of resistance at $15 (red). If the stock can break above $15 higher prices should follow, most likely a run back to the $17.50 level (blue).

The Tale of the Tape: BLOX has a key level of resistance at $15. A long trade could be entered on a break through that level. However, if you are bearish on the stock, a short trade could be made on any rallies up to $15.
Please share this article
at 12:03 AM No comments: Links to this post