OANDA fxTrade has taken the unprecedented step to HALT ALL FX TRADING from 6am EST to 3pm EST Sunday June 17th due to the risk of a ‘major market event during off-market hours’.

Buckle up boys and girls.

Due to the extreme volatility some market analysts foresee could result in the coming days, OANDA fxTrade will not accept any trading activity from 6:00 AM EST until approximately 3:00 PM EST, on Sunday, June 17, 2012. OANDA believes the convergence of a major market event during off-market hours represents a potential trading risk and has taken this rare step to protect traders from excessive rate fluctuations.

Please note that during this halt in trading, you can still access your account details but no trading activity will be accepted. For this reason, OANDA strongly recommends that all traders consider minimizing currency exposures prior to the trading halt.

If you do intend to maintain open positions during this period, be aware that OANDA will hold exchange rates steady during the trading halt. However, when trading resumes, rates will immediately adjust to the current market rate and it is possible that the updated rate could result in a margin closeout if the price has moved significantly against your positions.

Therefore, it is your responsibility to ensure you have adequate funds in your account to prevent a margin closeout.

OANDA apologizes for any inconvenience this may cause.

Fisher has built one of the largest and most successful clearing firms and proprietary trading outfits, making him one of the most closely followed oil traders, according to CNBC.

Oil has fallen to $83 a barrel because Saudi Arabia increased production, he told CNBC.

"They're trying to put the screws on Iran."

But after tougher sanctions against Iran are put into place later this month, Saudi Arabia may let oil to go back to $100, Fisher predicts.

Either way, it's going to move, he says. Eighty-three dollars a barrel is not the long-term equilibrium price for oil. It will either jump to $100 fall to $65.

"I think ultimately we're going up," Fisher told CNBC. "That's my gut, but when I get a gut feeling, I'm either really right or really wrong."

The OPEC meeting on Thursday may indicate the possible direction of future oil prices.

"Historically, the first move oil makes out of the OPEC is the wrong move," he says. After a couple days, the price heads in the other direction.

Although the world now has a good supply of oil, it is not over-supplied, the IEA cautions.

"Nobody knows exactly how oil supplies will develop this summer," the agency states in a recent report. "Memories are indeed short: crude prices remain very high in historical terms, and are acting as a drag on household and government budgets in OECD and emerging markets alike."

Demand from the power sector this summer and stockpiling by major countries like China ahead of the Iranian embargo could impact oil prices, IEA says.
Read more: Mark Fisher: Oil is Poised for Big Move, Most Likely Huge Surge
at 12:06 AM No comments:

Being inside a bubble creates an interesting atmosphere. To a certain degree logical voices from outside of the bubble need to speak up to recognize what is rather obvious yet lost for many within the bubble. There is no bigger housing bubble than the one currently happening in Canadian real estate. Not only is the bubble raging it has far surpassed what the US housing bubble reached at its pinnacle. Those in the housing bubble of course are intoxicated by the elixir of easy money. After all, simply sitting in your condo and having it go up $50,000 or $100,000 in a year for not lifting a finger sounds like a good investment. This happened all across the US from condo happy Miami, Boston, and Chicago to housing crazy California and Nevada. Yet the echoes are the same when one points this out. It is truly different here. The only true thing is that human psychology driven by unfettered greed creates bubbles over and over like the sun rising. Taking a look at the Canadian housing market, you realize that not only is a nationwide bubble in full force but some cities like Vancouver and Toronto are extraordinarily overpriced.

Comparing the Canadian and US Housing Markets

While the US housing market peaked in 2006 (six years ago and prices are now hitting lost decade territory) Canadian home values are now at their apex: 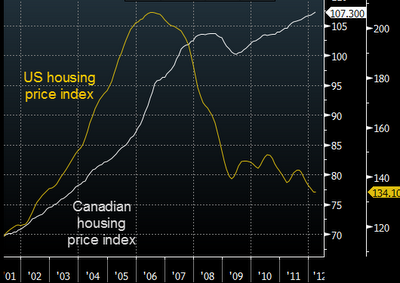 The source of this bubble is hot money from foreign markets and local buyers being caught up in the frenzy. Yet as we are now witnessing in this globally connected system, a bubble bursting in one market (i.e., Spain) will have ramifications all across the world. So paying attention to the Canadian housing bubble is obviously important for those in Canada but very important for people here in the US. (more)

James Turk of www.GoldMoney.com joined us today to discuss the ever deteriorating European/Euro debacle. Greece is having its Grapes of Wrath-Steinbeck moment and as you would expect, their government is absolutely clueless about what can be done about it. But in emergencies, one thing we can all count on is that government will fail, and they will attempt to convince the populace they’re in control and solving the problem. Which is why James has started the GoldMoney Foundation: he wants to educate people about sound money and limited government. Right now, the audience for such ideas is narrow. However, with each progression on the road to economic collapse, the number of awakened individuals increases and the demand for gold and silver goes up as well. The problem is that most people will not get it until paper money has ceased to function. Hopefully, through all of our efforts, many people will be able to avoid this fate.
at 12:05 AM No comments:

Please take a look at the 1-year chart of APH (Amphenol Corporation) below with my added notations: 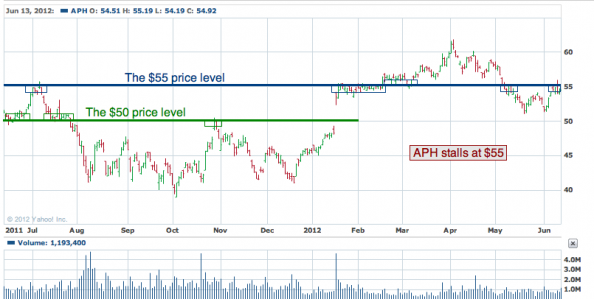 There are (2) main price levels to watch on APH. First, the $55 level (navy) has not only been resistance in July, January, February, and over the last 1 ½ months, but it was also a key level of support at the end of February and beginning of March. Next, $50 (green) has also been both a level of support last June-July and a resistance in October. Although the stock has held the $51-52 area over the last month, I believe a sustained sell-off would bring the stock back to the $50 level instead.

The Tale of the Tape: The main level to watch on APH is $55. You would want to buy APH if it breaks above $55, or short the stock on a rally up to $55. The trade you decide to make essentially comes down to what direction you think the overall market might be headed next.