Tableau Software, Inc., together with its subsidiaries, provides business analytics software products in the United States, Canada, and internationally. The company offers Tableau Desktop, a self-service analytics environment that empowers people to access and analyze data independently; and Tableau Server, a business intelligence platform with data management, scalability, and security to foster the sharing of data, as well as to improve the dissemination of information in an organization and promote enhanced decision-making. It also offers Tableau Online, a cloud-based hosted version of Tableau Server; and Tableau Public, a cloud-based platform that allows bloggers, journalists, researchers, and government workers to visualize public data on their Websites.
Take a look at the 1-year chart of Tableau (NYSE: DATA) with the added notations: 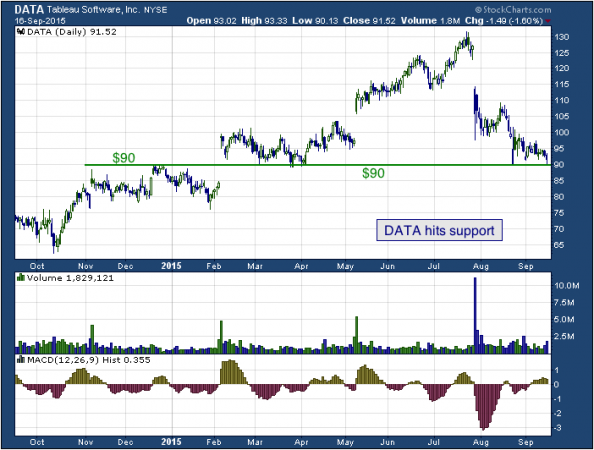 DATA rallied strongly higher from its October low. Now that the stock has declined lower, the most recent month has found DATA hitting support at $90 (green). That same $90 support was also support earlier in the year, and it was also a resistance back in December. Now that the stock appears to be testing that support level again, traders should be able to expect some sort of bounce. However, if the $90 support were to break, lower prices should follow.

The Tale of the Tape: DATA has a key level of support at $90. A trader could enter a long position at $90 with a stop placed under the level. If the stock were to break below the support a short position could be entered instead.
at 12:04 AM No comments: Links to this post

Have Soybeans Really Bottomed Out? 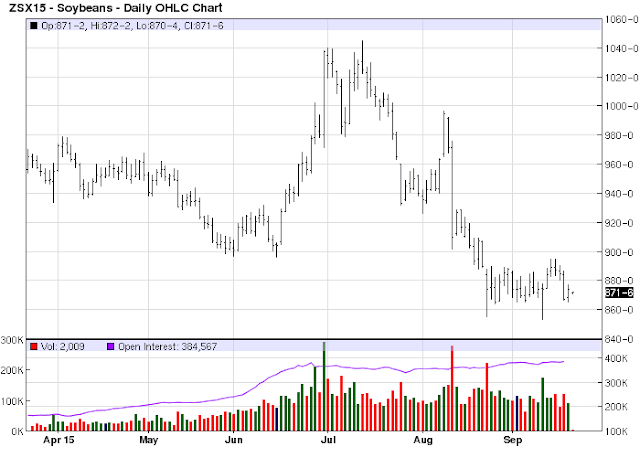 Soybeans may have made significant lows, but it doesn’t mean there will be a big rally due to any fundamental information that we know now. As we look at what may happen at harvest and into 2016, it is very possible that soybeans can trade back down to the lows made when traders sold futures as soon as the September 11th WASDE Report was released.

Norfolk Southern Corporation, together with its subsidiaries, engages in the rail transportation of raw materials, intermediate products, and finished goods. As of December 31, 2014, it operated approximately 20,000 miles of road in 22 states and the District of Columbia. The company also operates scheduled passenger trains; transports overseas freight through various Atlantic and Gulf Coast ports; and provides logistics services. In addition, it provides bimodal truckload transportation services primarily utilizing RoadRailer trailers, a hybrid technology that facilitates over-the-road and on-the-rail transportation in the eastern United States, as well as in Ontario and Quebec through a network of terminals.
Take a look at the 1-year chart of Norfolk (NYSE: NSC) below with my added notations: NSC has been on a steady downhill slide over the past 10 months. During the last 2 months of the decline, and recent rally, NSC created a clear level of resistance at $80 (green), which had also been support prior. A break above that $80 level should mean higher prices for the stock, and yesterday NSC broke that level.

The Tale of the Tape: NSC broke through its key level of resistance at $80. A long trade could be entered on a pull back down to that level. However, a break back below $80 could negate the forecast for a higher move and would be an opportunity to get short the stock.
at 12:03 AM No comments: Links to this post