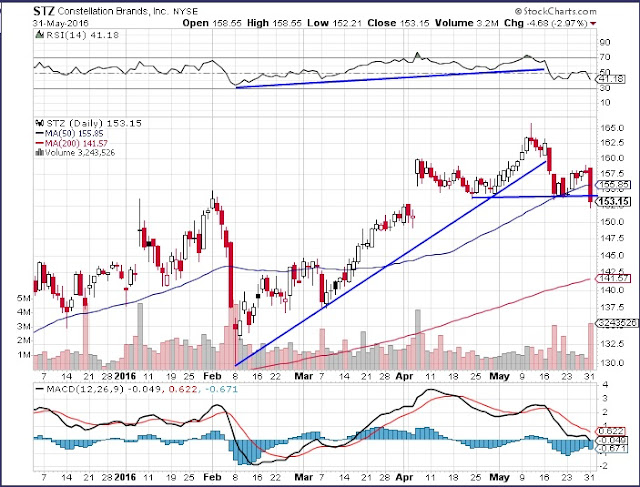 WWW had been declining rapidly into the end of 2015, but in January the stock began to rally, and then moved into a sideways trading range. While in that sideways move, the stock has formed a common pattern known as a rectangle. A minimum of (2) successful tests of the support and (2) successful tests of the resistance will give you the pattern.
The WWW rectangle pattern has formed a resistance at $20 (red), and a $16.50 support (green).  At some point the stock will have to break one of the two levels.

The Tale of the Tape: WWW is trading within a rectangle pattern. The possible long positions on the stock would be either on a pullback to $16.50 or on a breakout above $20. The ideal short opportunity would be on a break below $16.50.
at 12:03 AM No comments: Links to this post 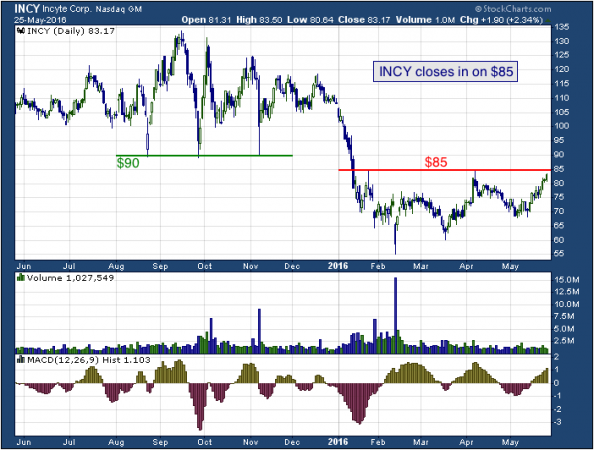 INCY appears to have been forming a base of some kind over the past several months, while also forming a key level of resistance to watch at $85 (red). INCY has already tested that level twice, and it looks like it’s going to do it again soon. A break above that $85 level should lead to higher prices, most likely the $90 level from last year, at minimum.

The Tale of the Tape: INCY has a key level of resistance at $85. A long trade could be entered on a break through that level. However, if you are bearish on the stock, a short trade could be made on any rallies up to $85.
at 12:03 AM No comments: Links to this post

Retrophin, Inc., a biopharmaceutical company, focuses on the development, acquisition, and commercialization of therapies for the treatment of serious, catastrophic, or rare diseases. Its product line includes Cholbam, a cholic acid for the treatment of bile acid synthesis disorders due to single enzyme defects, and for adjunctive treatment of peroxisomal disorders, such as Zellweger spectrum disorders in patients who exhibit manifestations of liver disease, steatorrhea, or complications from decreased fat soluble vitamin absorption; Thiola, which is indicated for the prevention of cystine stone formation in patients with severe homozygous cystinuria; and Chenodal, a synthetic oral form of chenodeoxycholic acid for radiolucent stones in well-opacifying gallbladders.
Take a look at the 1-year chart of Retrophin (NASDAQ: RTRX) below with my added notations: 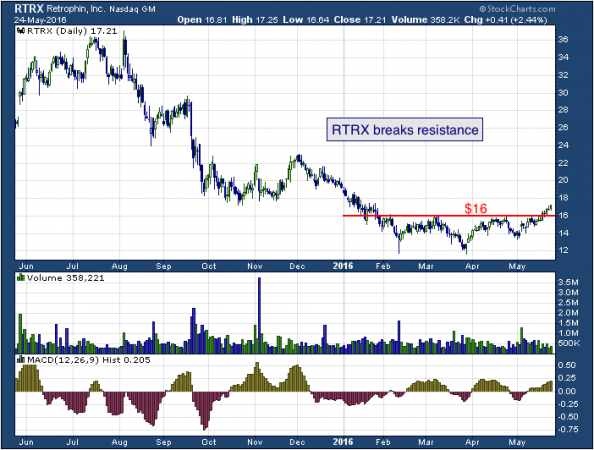 RTRX had been in a solid downtrend going into February. However, over the past several months the stock had also created a key level of resistance at $16 (red). A break above that $16 level should mean higher prices for the stock, and last week RTRX finally broke that resistance.

The Tale of the Tape: RTRX broke through its key level of resistance at $16. A long trade could be entered on a pull back down to that level. However, a break back below $16 could negate the forecast for a higher move and would be an opportunity to get short the stock.
at 12:03 AM No comments: Links to this post

DIA Dow Jones Industrial Average, Sell In May and Go Away, Collapse In Volume 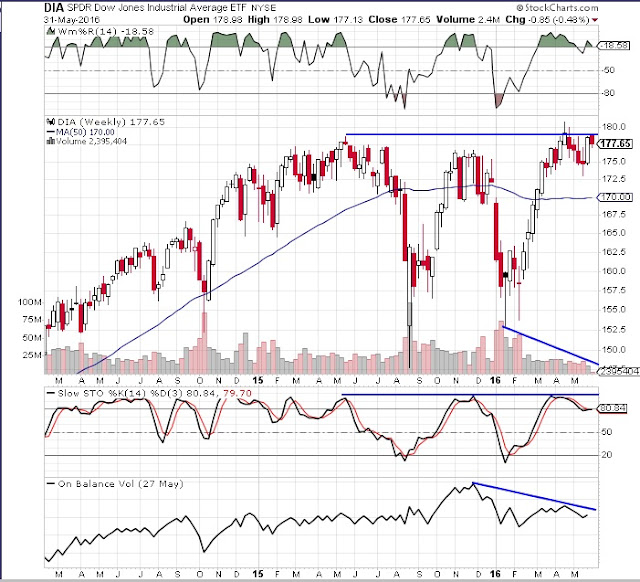