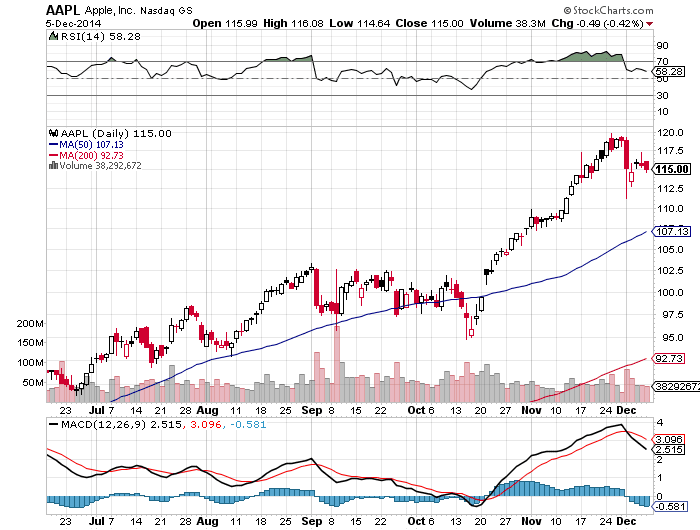 On Wednesday, JMP Securities surprised The Street by upping its Apple (NASDAQ: AAPL  ) price target to $150 per share from $135. The price target, the highest currently on record, values the company at nearly $900 billion. The reason for the upgrade: An "explosive" first-fiscal quarter, led by sales of the newest iteration of the iPhone.
JMP Analyst Alex Gauna spoke to Barron's Tiernan Ray to discuss his rationale for the 11% price target increase:


We raised our estimates and price target on the stock, following a review of what we saw from Black Friday to Cyber Monday. Demand is exceptionally strong both in the U.S. and China, with lead times at higher memory count models of the iPhone 6 Plus and also the iPhone 6. Also, there's been strong demand for the iPad Air 2. The iPhone 6 Plus is stocked out at all three major carriers in China, and we're seeing the longest lead times we've seen at Apple stores there, so very consistent with what we've seen in U.S. Overall, we're seeing very limited supply, with lead times still very strong.  (more)

Why Are Bearish Corn Facts Ignored? 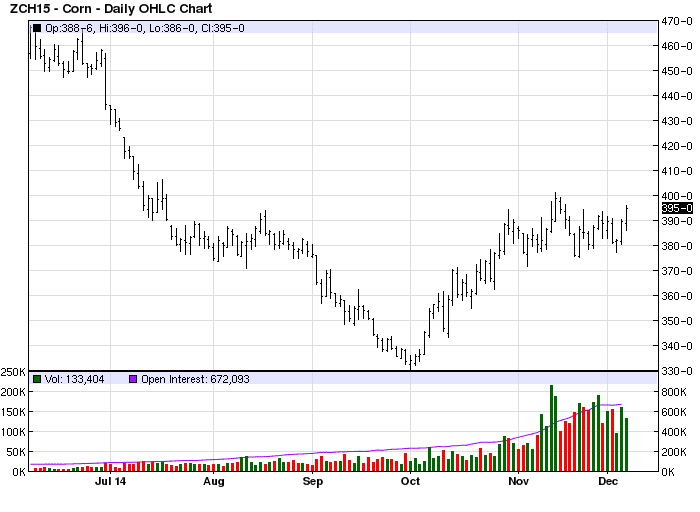 Maybe I am beating a dead horse trying to get the U.S. farmer and farmers around the globe to limit the risk of storing grain unpriced. The facts are so blatantly clear that the world grain stocks are huge. U.S. farmers know what is taking place in their local markets, US markets and world markets. They know farm storage is filled and they also know buyers have little to any storage currently available. They know 2014 is a buyers' market compared to the past two years. Cash basis is a daily reminder that the cash market is soft. I have talked to grain buyers that for the first time will carry corn not in bins, but stored under cover outside. There are reports that farmers will leave corn in the field rather than selling it, or paying to store it.
It is no secret that total U.S. corn yields broke records in 2014. If it isn't a 15 billion bushel crop, or close to it, will make little difference. One brighter light for grain prices; feed usage is up with cattle feeders pushing new heavier weights for steers. For the first week of September, average carcass weights hit a record at 885 pounds. In October carcass weights stopped four pounds off 900 pounds at 896 pounds. However, the herd reduction with droughts in the Southwest in 2011 and the drought of 2012 reduced overall heard size that doesn't equate to feedlot size before the drought. With the increase of coarse grain yields, along with the drop in export demand for corn and wheat, the increase for feed is a little more than a drop in the bucket. It is also expected in 2015 to see total cattle feeding to drop with larger percentages of heifers being bred.  (more)
Please share this article
at 12:04 AM No comments:

Are we about to see U.S. stocks take a significant tumble?  If you are looking for a “canary in the coal mine” for the U.S. stock market, just look at high yield bonds.  In recent years, almost every single time junk bonds have declined substantially there has been a notable stock market correction as well.  And right now high yield bonds are steadily moving lower.  The biggest reason for this is falling oil prices.  As I wrote about the other day, energy companies now account for about 20 percent of the high yield bond market.  As the price of oil falls, investors are understandably becoming concerned about the future prospects of those companies and are dumping their bonds.  What is happening cannot be described as a “crash” just yet, but there has been a pretty sizable decline for junk bonds over the past month.  And as I noted above, junk bonds and stocks usually move in tandem.  In fact, junk bonds usually start falling before stocks do.  So does the decline in high yield bonds that we are witnessing at the moment indicate that we are on the verge of a significant stock market correction?  (more) 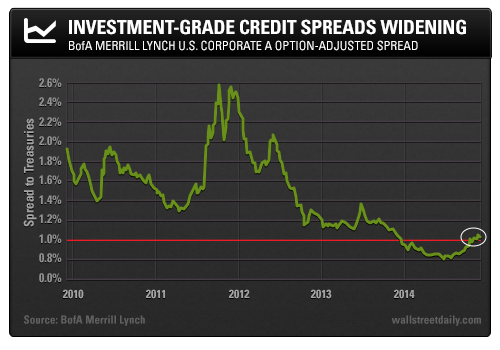 What do McDonald’s (MCD), Philip Morris (PM), Caterpillar (CAT), Kimberly-Clark (KMB), and Target (TGT) have in common?
Yes, they’re all large-cap stocks that pay solid dividends.
In fact, three are even Dividend Aristocrats, having increased their dividends for at least 25 consecutive years.
But the common characteristic I’m referring to isn’t related to their dividends… or even their common stocks. Instead, I’m looking higher up in the capital structure. (more)

Las Vegas Sands Corp. develops, owns, and operates integrated resorts in Asia and the United States. The company owns and operates The Venetian Macao Resort Hotel, Sands Cotai Central, the Four Seasons Hotel Macao, the Plaza Casino, and the Sands Macao in Macau, the People’s Republic of China. It also owns and operates the Marina Bay Sands in Singapore; The Venetian Resort Hotel Casino, The Palazzo Resort Hotel Casino, and Five-Diamond luxury resorts on the Las Vegas Strip; the Sands Expo and Convention Center in Las Vegas, Nevada; and the Sands Casino Resort Bethlehem in Bethlehem, Pennsylvania. The company’s integrated resorts comprise accommodations, gaming, entertainment and retail facilities, convention and exhibition facilities, celebrity chef restaurants, and other amenities.
Take a look at the 1-year chart of Vegas (NYSE: LVS) below with added notations: 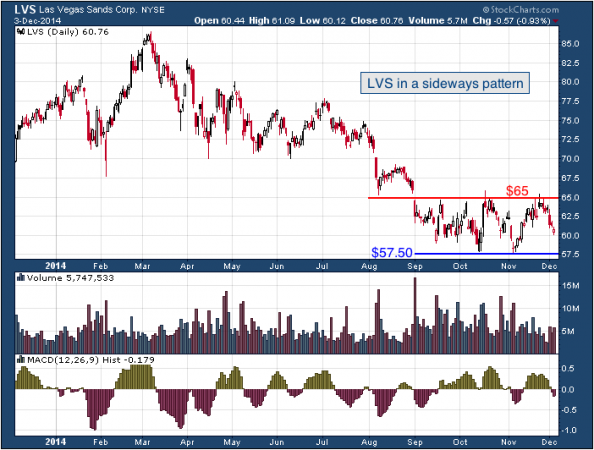 LVS has been trading sideways for the last 3 months, while forming a common pattern known as a rectangle. A minimum of (2) successful tests of the support and (2) successful tests of the resistance will give you the pattern. LVS’ rectangle pattern has formed a $65 resistance (red) and a $57.50 support (blue). At some point the stock will have to break one of the two levels created by the rectangle pattern.

The Tale of the Tape: LVS is trading within a rectangle pattern. The possible long positions on the stock would be either on a pullback to $57.50, or on a breakout above $65. The ideal short opportunity would be on a break below $65.
Please share this article
at 12:03 AM No comments:

While some investors may be worried about oil derailing the rally, two pros told CNBC on Thursday they expect the Dow Jones industrial average (Dow Jones Global Indexes: .DJI) to break 18,000 soon, and go even higher.

"The overriding thing driving this market up and the reason it will break 18,000 is not the oil patch, it is the Fed patch. It's the $4.5 trillion that they jammed into the economy that's pushing every asset price higher almost every day," John Rutledge, chief investment strategist at Safanad, said in an interview with " Street Signs ." (more)

Could rapidly falling oil prices trigger a nightmare scenario for the commodity derivatives market?  The big Wall Street banks did not expect plunging home prices to cause a mortgage-backed securities implosion back in 2008, and their models did not anticipate a decline in the price of oil by more than 40 dollars in less than six months this time either.  If the price of oil stays at this level or goes down even more, someone out there is going to have to absorb some absolutely massive losses.  In some cases, the losses will be absorbed by oil producers, but many of the big players in the industry have already locked in high prices for their oil next year through derivatives contracts.  The companies enter into these derivatives contracts for a couple of reasons.  Number one, many lenders do not want to give them any money unless they can show that they have locked in a price for their oil that is higher than the cost of production.  Secondly, derivatives contracts protect the profits of oil producers from dramatic swings in the marketplace.  These dramatic swings rarely happen, but when they do they can be absolutely crippling.  So the oil companies that have locked in high prices for their oil in 2015 and 2016 are feeling pretty good right about now.  But who is on the other end of those contracts?  In many cases, it is the big Wall Street banks, and if the price of oil does not rebound substantially they could be facing absolutely colossal losses.
It has been estimated that the six largest “too big to fail” banks control $3.9 trillion in commodity derivatives contracts.  And a very large chunk of that amount is made up of oil derivatives. (more)