Lindsey Williams Author of The Energy Non Crisis reveals that the Global Elite are planning on engineering the total collapse of the U.S. Dollar as part of a worldwide economic collapse as a pretext of ushering in World War 3 and their long planned New World Order. Williams earned the trust of key top level executives in the Oil Industry in his role as Chaplain for the men who constructed the Trans Alaskan Oil Pipeline. These Bilderberg Level Globalist insiders including the recently deceased Ken Fromm of ARCO have been confessing the diabolical agenda of the Global Elite to Pastor Williams increasingly as these men realize that they are rapidly approaching the end of their mortal lives. Lindsey Williams recently came out﻿ with "new information" to watch out for the implosion of derivatives.
at 12:07 AM No comments: Links to this post

Brent and WTI crude oil prices have been close to an eight-month low as OPEC meets to talk about production quotas. Word is the group will not cut output a broader weakening of the global economy. This is despite some calls for supply cuts to curb the price slide. BUT is excess supply the reason prices have come down? Not according to Agora Financial’s energy expert Byron King. He says the worlds largest oil fields are depleting and global discovery rates are NOT keeping up.

And so the question becomes – what’s the future of energy? Are green energy players losers without subsidies? Can anything compete with natural gas when its price is so low? And is Nuclear still game on despite the Fukushima disaster? We’ll try to answer all of those questions with our guest Byron King, and while we’re on resources, talk industrial metals.

Who is Alessio Rastani? This is the clip of the trader who made headlines last fall as he scared sense into BBC viewers, and the interviewer, by merely being candid. Arguably we should be able to expect candor from professional financial advisers, but a trader who admittedly is in the game to make money? Why should he bother? Yet, much of what he says echoes Michael Maloney’s key messages: You can’t expect the government to “fix it.” Educate yourself about what is coming, so that you can both protect your wealth and profit.

The Sydney Morning Herald writes that Rastani studied law at the University of Wales before going to work for a financial institution he would not name, then going into trading for himself.

“What I would say, is if you are sitting around waiting for the government to sort out this financial mess - be prepared to wait a long time,” Rastani says. “During that time, there will be people like me, in the trading business who are going to make a killing in this climate. If you don't get yourself educated, and learn how to make money in this market, then you could be left with nothing.” (more)

Learning from the Best: Inflation Lessons from Argentina

Spain was down again before we noticed it was up. Yesterday morning, stocks all over the world were rising on hopes of a solution to the euro problem. By afternoon, the rally was over. The Dow ended the day down 142 points.

But that’s the way the euro rescues go. The effects are more and more short-lived. Pretty soon, investors will realize they don’t work at all…and then there won’t be any up-surge, A new rescue plan will be announced. Investors will realize it is just another scammy fix. And stocks will go down.

When that happens the game will be over.

We might not be far from that point now.

Meanwhile, the US is worried too. About Europe, which is on the verge of total breakdown? Maybe. About China, which is growing at its slowest pace in 13 years? Maybe. (more)

by The Daily Bell:

O’Neill’s BRICs Risk Hitting Wall Threatening G-20 Growth … Even Jim O’Neill is asking whether the BRICs need reinforcing 11 years after he coined the term to describe the world’s future powerhouse economies. O’Neill, chairman of Goldman Sachs Asset Management, says his thesis that Brazil, Russia, India and China would together increasingly buoy the global economy faces “a more challenging test” as investors dump the countries’ stocks … Leaders attending next week’s Group of 20 summit in Mexico are already expressing concern, with Brazilian President Dilma Rousseff warning June 4 that emerging markets can’t carry the weight of the world on their shoulders. Rich-nation policy makers “are so wrapped up in their own problems they’re praying some of this weakness is just temporary in the BRICs,” London-based O’Neill, 55, said in a telephone interview. “If it’s not, then it’s pretty worrying.” – Bloomberg

Dominant Social Theme: It’s pretty bad. But maybe, somehow it will get better

Free-Market Analysis: There is surely a power elite that is trying to drive the world into depression. We would tend to believe it is succeeding. This latest squawk from Goldman Sachs is testimony to that.

Today top trends forecaster Gerald Celente discussed gold at length, as well as other important trends with King World News. Celente is the founder of Trends Research, and the man many consider to be the top trends forecaster in the world. Celente predicted, “a tidal wave entrance into gold,” because “the entire financial system is in collapse.” But first, here is what Celente had to say about what is happening around the world: “The highlight for the moment is on Greece, but let’s remember that Greece only counts for 2% of the eurozone GDP. It’s more about publicity. How will it look if they leave? Also, everybody knew that the $125 billion (for Spain) was a drop in the bucket compared to the trillions of dollars of debt.” 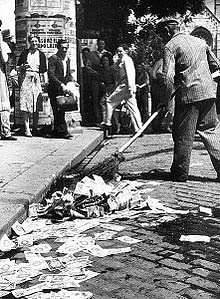 For some reason, whenever people want to make a historical example of a hyperinflationary period, they always bring up the Weimar Republic, aka Germany in 1920-1923. Yet with a highest monthly inflation of just under 30,000%, Weimar was a true walk in the park compared to the 309,000,000% monthly inflation in 1992-1994 Serbia, but especially to the 12,950,000,000,000,000% inflation that Hungarians had to deal with in the aftermath of WWII. For these and more comparative examples of hyperinflation, particularly relevant now that the entire world is rumored (for now) to be getting ready to print, see below.

It’s one thing when Jeff Gundlach, a bond manager, calls a bottom in natural gas as he did last month. It’s a whole other story when an energy billionaire calls the bottom. Boone Pickens was on CNBC today saying natural gas prices have likely seen their lows. He says:

“You’re gonna tighten this thing up. Looking out at summer next year at 3-plus (dollars), I think that’s where you’re gonna be. Yeah, I think you’ve bottomed out on natural gas prices.”

The primary drivers here? Shutting down oil rigs and the decline in coal production should benefit natural gas demand. Additionally, Pickens says the USA has to stop exporting wealth to OPEC and start tapping the resources the USA has here. And nat gas is his primary focus regarding these comments.

The world is on now on the brink of a global credit crisis that could be far worse than the tumultuous events of 2008. The ongoing sovereign debt crisis in the southern reaches of the Eurozone indicate that bank runs in the region will continue, and that more bank closure “holidays” will be declared. Under a bank holiday, virtually all deposits could be frozen and irredeemable for days, weeks, or even months. The key question is: Will this crisis spread to the rest of Europe and then even to the United States? I urge SurvivalBlog readers–particularly those in Europe–to be proactive, to stay “ahead of the power curve.” While the Generally Dumb Public (GDP) wakes up some morning to hear news of a bank holiday, you will have long hence prepared yourself.

Digits Lost in the Ether–Redeemable Mañana?

Most people don’t realize that printed U.S. currency and minted coins amount to less than $800 billion, worldwide. That is just a small portion of the aggregate Money Zero Maturity (MZM) money supply that now exceeds $7 Trillion. So what is in your bank account is just electronic money, and there is absolutely no way that even a fraction of depositors could get physical cash to redeem the digits in their accounts. If there is a bank holiday declared, there will undoubtedly be severe restrictions on cash withdrawals when banks re-open. Given the precedent of the limits on withdrawals of a few institutions during the Savings and Loan crisis of the 1980s and 1990s, I predict that withdrawal restrictions could go on for many months.

Here are 20 Reasons why America’s next bank holiday will be a nightmare: