Aegerion Pharmaceuticals, Inc., a biopharmaceutical company, develops and commercializes therapies for patients with debilitating rare diseases in the United States. The company’s products include JUXTAPID (lomitapide) and LOJUXTA (lomitapide) hard capsules, an adjunct to a low-fat diet and other lipid-lowering treatments in patients with homozygous familial hypercholesterolemia. It also has the right to use lomitapide in the field of monotherapy or in combination with other dyslipidemic therapies for treatment of patients with other severe forms of hypercholesterolemia. The company distributes its product directly to patients and other purchasers through a specialty pharmacy.
To review Aegerion’s stock, please take a look at the 1-year chart of AEGR (Aegerion Pharmaceuticals, Ltd.) below with my added notations: 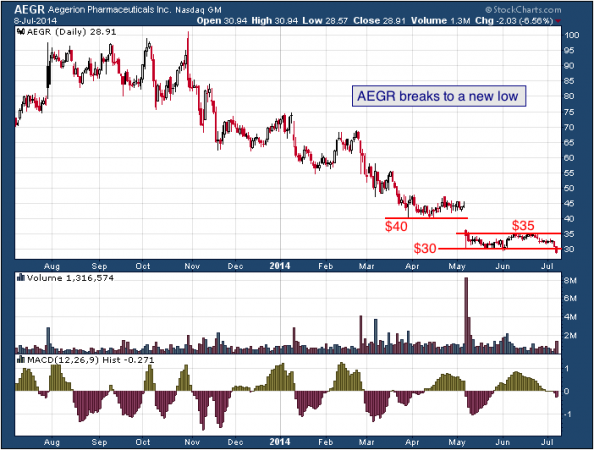 AEGR has been trending lower for most of the entire year. During the last 3 months the stock had held a clear level of support at $30, as well as forming prior $5 levels at $35 and $40 (red). With a market moving higher over the last year, AEGR has not been able to follow along and broke below $30 yesterday. This breakdown is not only a new 52-week low, but it’s also a break of a clear support level.

The Tale of the Tape: AEGR has broken a key support level of $35, which was a 52-week low breakdown. This should signal lower prices ahead for the stock. A short trade could be entered on AEGR on a rally up to $30, with a stop set above that level. A break back above $30 would negate the forecast for a move lower and a long position could be considered instead.
Please share this article
at 12:04 AM No comments: Links to this post 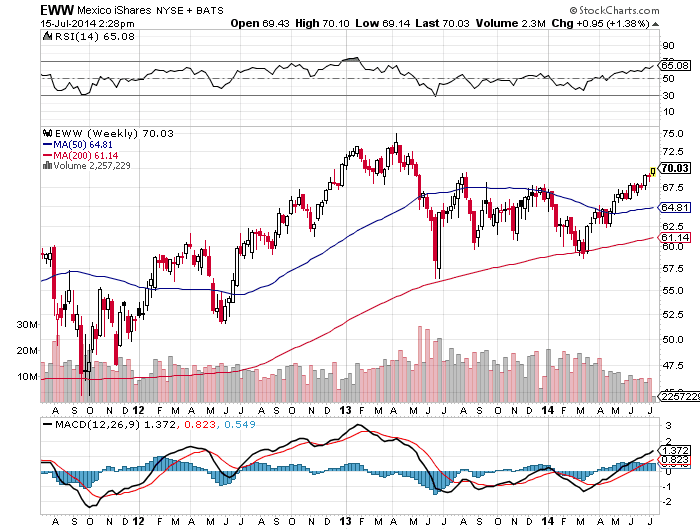 Could Mexico’s economy and stock market be taken to the next level by surging international and American direct investments?
In the wake of China’s economic challenges, let’s take a deeper look at the fascinating and complicated triangle of trade and investment between Mexico, America, and China.
China’s Loss is Mexico’s Gain
According to consultant AlixPartners, Mexico has surpassed China to become the cheapest country for manufacturing — especially for products for the U.S. market. Of the big emerging markets, next is India, followed by China and then Brazil.  (more)

Investors Forgot Everything That Happened Just a Few Years Ago?

There are two important charts I want my readers to see this morning.

The first is a chart that is an indirect measure of demand in the global economy. Right now, the Baltic Dry Index (BDI) sits at its lowest level of the year. Since the beginning of 2014, the BDI has fallen 60%.

The BDI measures the cost of moving major raw materials by sea in the global economy. The thinking is that the lower the cost to move goods by ship, the lesser the amount of goods to move (a strict demand/supply price situation).
More…Please share this article
at 12:04 AM No comments: Links to this post

Gold and gold stocks are starting to firm up within their basing patterns. Back on April 16, 2014 I wrote an article with my gold forecast. Today I've provided the weekly chart from that article and have added an arrow to show you where I feel the gold market is trading within this pattern. While gold and gold stocks remain in their stage 1 basing pattern, I feel they are a little overextended to the upside and ready for a minor correction.
One thing investors and traders must understand is that the stage I basing pattern can last months if not years at times. Trading during this stage I basing pattern can be very frustrating and volatility of the investment will remain high. This is a time when the investment is being accumulated and distributed by large institutions. This is what causes large percentage price swings within this stage. 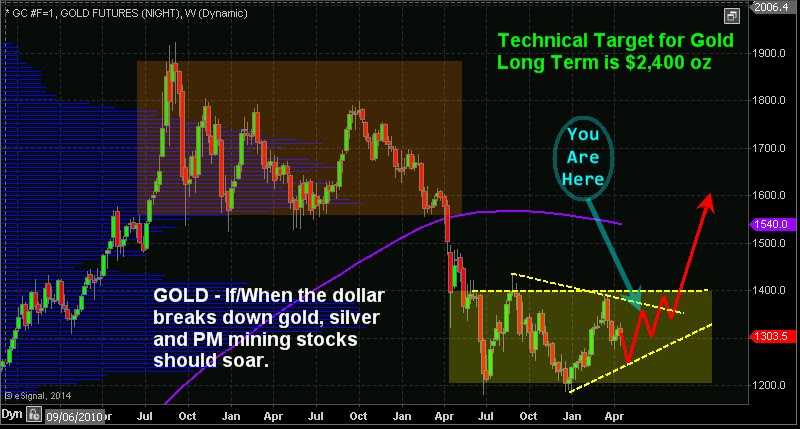 While gold, gold stocks, silver and silver stocks have shown strong on balance volume and relative strength, this market remains in a fragile state until key resistance levels are broken with both physical metals and mining stocks. The first sign of a trend reversal is signaled by a higher high within an investment. Gold, silver, precious metals stocks have yet to make a higher high on the daily or weekly charts.
Below is a chart with both the price of gold and gold. You’ll see from the chart the price action has formed what appears to be a blow off top. This type of pattern happens during key turning points within investment. As investors and traders Chase prices higher in fear of missing out they created one final rally or pop in price that signaled the end of a short term trend. I like to call these a pop-and-drop reversal pattern.
The chart in my analysis clearly shows where I feel prices are likely to head next. While I am bullish on the gold market long-term I feel as though we are ready for a multi week correction in the precious metals. 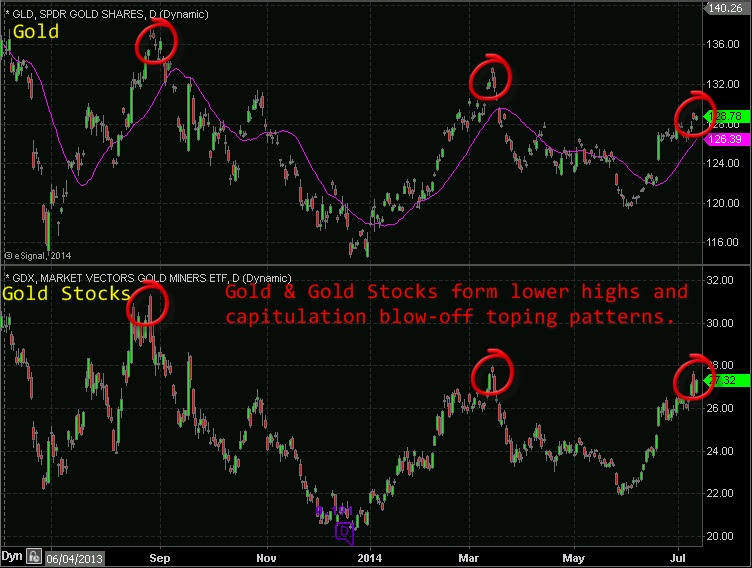 Looking at the broad market using the SP500 index. It looks as though stocks are ready to continue running higher for another week or two. If this takes place than money will flow back into large-cap stocks as the safe haven play and money will likely rotate out of the overbought precious metals sector for the next two weeks.
Please share this article
at 12:03 AM No comments: Links to this post 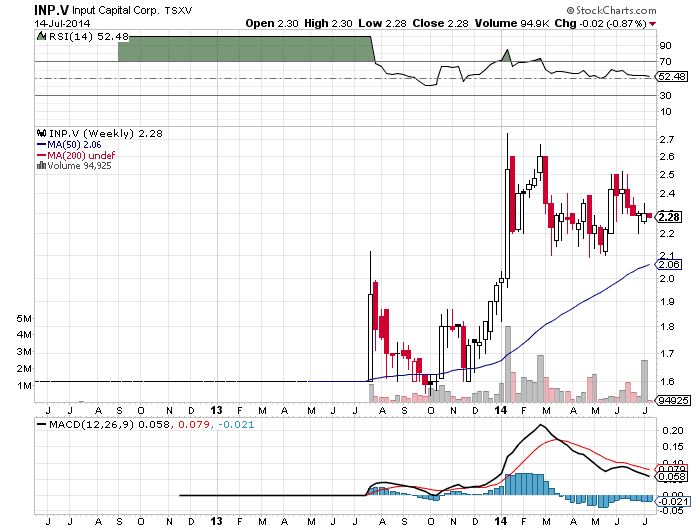 Quick now, what’s Canada’s biggest export to China? A metal like copper or zinc; fuel like coal, oil or gas, or even a fertilizer like potash? Well, how about canola, formerly known as — wait for it! — rapeseed?
That’s right, canola. Not only is it our biggest export to the Middle Kingdom, but it now accounts for almost one-third of all farm receipts in Canada, says Michael Mills, an analyst with Beacon Securities in Halifax.
Indeed, the Canola Council of Canada puts the overall value of our canola industry at over $19 billion a year. Moreover, canola is reportedly considered the healthiest cooking oil available.
“You’re seeing increased usage in cooking applications versus some of the vegetable oils out there, such as palm oil,” says Mr. Mills.
“You’re seeing increased adoption of the use of canola oil globally.”
Small wonder that Mr. Mills likes Regina-based Input Capital Corp. (INP-TSX/VEN), a canola “streaming company” and the only play now out there on Canada’s canola industry.
As a “streaming company,” Input provides farmers with upfront capital. In exchange, it gets a set tonnage of canola grain.
Co-founders singled out
But Input’s status as Canada’s only canola outfit isn’t the only reason Mr. Mills has singled it out. He also has high praise for its management team — in particular, co-founders, Doug Emsley and Brad Farquhar.
Not only are both men well respected in Canadian agriculture, says Mr. Mills, but they also founded the biggest farmland fund in the country, whose portfolio they sold in January to the Canada Pension Plan Investment Board.
Not surprisingly, he can’t praise Input enough.
“I like the company’s model. It has generated cash flow from year one. And these guys have found a niche market and they have a big first mover advantage,” says Mr. Mills, who sees Input growing rapidly over the next few years.
For Mr. Mills, Input Capital is a “best buy” — one with a 12-month price target of $3.75. For fiscal 2015 (March 31 year end), his cash flow estimate is $0.28; for fiscal ’16, $0.34 a share.
For the year ended March 31, 2014, Input’s net loss deepened to $4.1 million or $0.09 a share, from $369,600, or $0.03 a share, for the similar period in 2013.
The company also posted sales of $5.1 million, as well as gross profit of $1.4 million.
Mr. Mills may like a Western Canadian company such as Input that’s based in Saskatchewan. But he also has a soft spot for a Western Canadian outfit like Petrowest Corp. (PRW-TSX) that’s based in Alberta.
For starters, Petrowest, an oilfield services firm, rosters one of the biggest fleets of heavy construction equipment in the West.
And Western Canada, given its many oil and gas projects now on the drawing boards, is likely to see an enormous construction spurt over the next few years.
Company a play on liquefied natural gas
In fact, for Mr. Mills, Petrowest is a play on the many pipelines and storage facilities for liquefied natural gas that are now being planned — especially in northern British Columbia.
Although many of those projects have yet to be OK’d, Petrowest is already benefiting from the need that companies have for access roads to service the proposed projects, Mr. Mills says.
Moreover, given Petrowest’s big presence at Fort St. John, B.C., it’s well-positioned to benefit should BC Hydro go ahead and build a 1,100-megawatt hydroelectric dam just seven kilometres away.
Ultimately Mr. Mills sees Petrowest being bought by a big national or international construction engineering company that wants to be in the thick of LNG action in Western Canada.
For Mr. Mills, Petrowest is also a “best buy” — one with a 12-month price target of $1.60.
For fiscal 2014 and ’15, his net earnings estimates are $0.09 and $0.13 a share, respectively.
For the three months ended March 31, Petrowest swung to net income of $3.5 million, or $0.02 a share, from a net loss of $4.3 million, or $0.03 a share, for the similar period last year.
Revenue, not surprisingly, was also a brighter picture, rising $15.7 million, or 34.2 per cent, to $61.6 million, while operating profit jumped $5.2 million, or more than 15 times, to $5.6 million.
Please share this article
at 12:03 AM No comments: Links to this post