5 Easy-to-Follow Steps for a Worry-Free Retirement

Worry-free finances = a happy, productive retirement, right?
Well, that goal is easier to accomplish than you think. It only takes a little sacrifice... and as much planning as you can muster.
I'm going to tell you about five tips that should make your golden years that much more golden.
Ideally, begin planning with your first real paycheck. However, regardless of your age -- or financial condition -- starting now is better than not starting at all. Just remember: Each year you are closer to retirement, the more capital you'll need saved to reach your retirement goals.
I have other tips to put you on a path toward a worry-free retirement... And while nothing is guaranteed, these tips should get you started.

(more)
Please bookmark us
at 12:07 AM No comments: Links to this post

James Turk – The Single Most Important Chart For All Of 2013

kingworldnews.com / March 4, 2013
Today James Turk sent King World News what he believes is the single most important chart for all of 2013.  Turk also spoke with KWN about the enormous implications of this chart and what it means for investors around the world.  Here is what Turk had to say in this extraordinary and exclusive interview:  “The gold mining shares have never been this cheap, Eric.  The chart below of the XAU Index goes back to 1983, when the XAU Index was first constructed.  But note that this chart illustrates prices of the XAU Index over these 3-decades in terms of gold and not the way it is normally presented, which of course is in US dollars.”
James Turk continues:
“There are a few reasons for doing this.  First, and probably most importantly, this chart shows the relative performance of gold measured against the mining shares in the XAU Index.  Since the collapse of Bre-X back in 1997, the trend has been down.  It means that for 16 years gold bullion has been outperforming the gold mining shares, and of late is doing it dramatically.

Of course some individual shares have done better than bullion, but these instances are based on circumstances unique to the company, such as new discoveries or other factors.  But this chart shows that the bulk of the gold mining shares have been underperforming, which is another reason I use the XAU Index.  The XAU Index comprises the share price of 30 mining companies….
Please bookmark us
at 12:05 AM No comments: Links to this post

Here I have the weekly count of CRBQ ETF which is consolidating for more than a year now, so no direction actually. However, the Elliott Wave patterns suggest that we could see a break lower after five down in A followed by a triangle formation in wave B. Break of wave D point should be trigger for weakness beneath 2011.

Lululemon Athletica, Inc., together with its subsidiaries, designs, manufactures, and distributes athletic apparel for women, men, and female youth. The company's line of apparel and accessories include fitness pants, shorts, tops, and jackets for healthy lifestyle activities, such as yoga, running, and general fitness. Its fitness-related accessories comprise bags, socks, underwear, yoga mats, instructional yoga DVDs, and water bottles. The company sells its products through a chain of corporate-owned and franchise stores; direct to consumer through e-commerce; and a network of wholesale channel, such as yoga studios, health clubs, and fitness centers. As of January 29, 2012, it had 47 stores in Canada, 108 stores in the United States, 18 stores in Australia, and 1 store in New Zealand under the lululemon athletica and ivivva athletica brand names. lululemon athletica inc. was founded in 1998 and is based in Vancouver, Canada.
To review Lululemon's stock, please take a look at the 1-year chart of LULU (Lululemon Athletic, Inc.) below with my added notations: 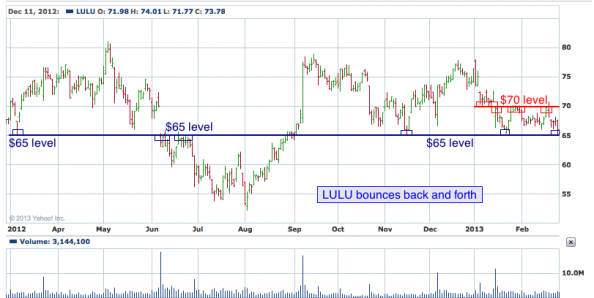 Over the last (2) months LULU has been consolidating within a small, rectangle pattern. Rectangle patterns form when a stock gets stuck bouncing between a horizontal support and resistance. A minimum of (2) successful tests of the support and (2) successful tests of the resistance will give you the pattern. For LULU, the rectangle pattern has formed a $70 resistance level (red), which was also a prior support, and a $65 support level (navy) that has also previously been resistance.
The Tale of the Tape: LULU has formed a rectangle pattern. The possible long positions on LULU would be either on a pullback to $65, or on a breakout above $70. The ideal short opportunity would be on a break below $65 or at $70.
Please bookmark us
at 12:04 AM No comments: Links to this post

New car sales in Germany fell by more than 10 percent year-on-year in February, signaling the crisis for Europe’s auto makers is deepening as recession-hit consumers curb spending. New car sales in the region dropped to a 17-year low in 2012.
Speaking ahead of the industry meeting in Geneva, the sales chief of General Motors’ (GM.N) Opel brand said car sales for the whole of Europe might fall by as much as 10 percent this year.
Until recently, industry executives have been penciling in a decline of around 3-5 percent for Europe’s car market in 2013. The market shrank 7.8 percent last year.
Continue Reading at GlobalEconomicAnalysis.Blogspot.ca…
Please bookmark us
at 12:04 AM 1 comment: Links to this post

The two most hotly debated scientific concepts associated with energy are “global warming” and “peak oil,” both with myriad proponents and detractors around the world.
In the latter case however, what is indisputable is that the last several decades have seen major fields in significant oil exporting nations decline. From Saudi Arabia’s Ghawar superfield through the Russian Federation’s vast west Siberian field to Indonesia, oil output has spiked, and, in the case of Indonesia, it left the Organization of the Petroleum Exporting Countries in 2009 because it ceased to be a net exporter of oil. For those with a sense of history Indonesia, then the Dutch East Indies, was a major factor in the outbreak of world War Two in the Pacific, as the Japanese in late 1941 determined to seize the oil-rich archipelago in response to a U.S. oil embargo imposed earlier that year.
Read More @ OilPrice.com

3 Deep-Value Stocks to Profit From

Sometimes opportunities in the stock market are where you least expect them. When a company sees a spike in share price on news of a buyout that ultimately fails, that stock is left for dead by most investors...
But you can actually find deep value here.
Let me explain...
After a series of stumbles throughout 2011, the board of directors at health care information provider WebMD (Nasdaq: WBMD) realized that the company may be better off in the hands of a larger digital information company.
An announcement at year's end helped to give fresh life to shares, as they quickly rebounded toward the $40 mark.
But few companies were interested in buying WebMD at that price, let alone at the 20-40% premium that shareholders typically expect in a buyout offer. The company's board announced that plans to sell the company were off the table in the near-term, sending shares quickly to fresh multi-year lows. Eventually, this company dropped off the front page, and its shares fell below $15 as investors moved on to other, timelier opportunities.

Yet it's worthwhile to keep tracking these companies after the crowd has moved on. For example, even in the absence of near-term buyout prospects, value investors started to move back in to WebMD, pushing shares up more than 15% in January. That was a wise move as WebMD recently announced stellar quarterly results, helping shares to post a heady 50% in the past three months to about $22. (more)
Please bookmark us
at 12:03 AM No comments: Links to this post