Rackspace Hosting, Inc. provides cloud computing services, managing Web-based IT systems for small and medium-sized businesses, and large enterprises worldwide. Its service offering combines hosting on dedicated hardware and on multi-tenant pools of virtualized hardware in a way that suits each customer’s requirements. The company offers dedicated cloud services comprising customer management portal and other management tools for managing the data center, network, hardware devices, and operating system software; and public cloud that provides pooled computing resources delivered on-demand over the Internet to manage a pool of computing resources across a larger base of customers and deliver computing resources to businesses when they need them. It offers cloud servers for computing, and cloud files for storage, as well as cloud applications, such as email, collaboration, and file back-ups; and hybrid hosting that provides hosted computing on dedicated hardware and on pools of shared resources.

To review Rackspace’s stock, please take a look at the 1-year chart of RAX (Rackspace Hosting, Inc.) below with my added notations: 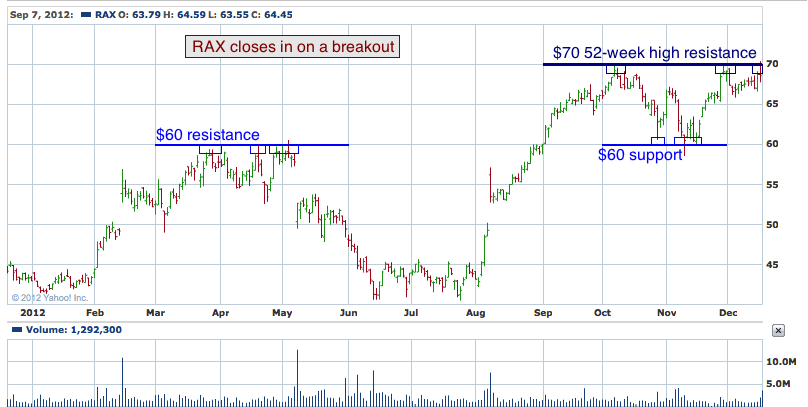 RAX has recovered nicely from its June-July bottom. However, over the last (3) months the stock has been stalling at a clear $70 resistance level (navy). A break though this level would be a 52-week high and should mean higher prices overall for the stock. Another failed attempt to break through the $70 level could mean a fall back down to the common level of $60 (blue).
at 12:06 AM No comments: Links to this post

Is This the Bottom For Uranium Prices? 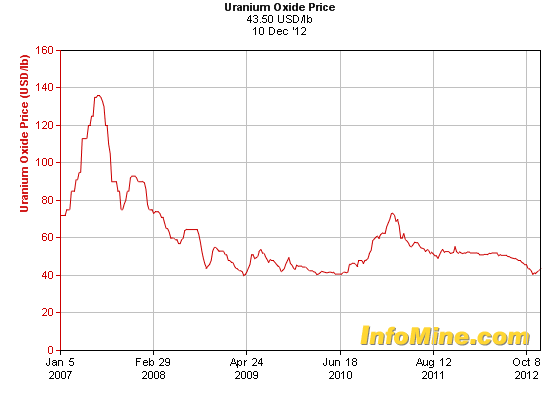 With interest rates set to be low until 2015, this means that financing for cars will be extremely affordable for the next few years. Currently, the interest rates banks are charging for car loans are among the lowest since 1971, when the Federal Reserve started keeping track of such data. This will greatly increase the affordability of product in the automotive market sector, and should allow for an investment opportunity.

One of the firms in the automotive market sector that I brought to my readers’ attention several months ago was Ford Motor Company (NYSE/F), when it was below $10.00 per share. Ford reported a year-over-year increase of 6.4% in total for November, to 177,092 vehicles. Sales of small cars were up an astonishing 76% year-over-year, the highest in 12 years. The “F-Series” pickup truck increased sales by 18% year-over-year, the strongest since 2005.

Obviously, this is not a coincidence. The low interest rate environment encouraged by the Federal Reserve is working in some areas of the economy. We all know that real estate is starting to rebound, and now we’re seeing several months of strong sales in the automotive market sector.

As I noted several months ago, this investment opportunity is based on an easy monetary policy, along with a rebound in the housing market. The senior economist at Ford, Jenny Lynn, echoed my sentiment in the conference call, stating, “Economic indicators are pointing to modest economic growth with a better housing sector ahead.” (Source: Ibid)

The interesting item to note is that the automotive market sector is having strong sales, in spite of a weak economy. As an investment opportunity, as long as the fiscal cliff issue is resolved, and the economy picks up steam next year, we could see significant increases in both revenue and earnings for the automotive market sector. Over the short term, damage due to Hurricane Sandy will increase vehicle sales on the East Coast between 20,000 and 30,000, according to Ford.

One caveat for Ford is related to some very serious European concerns. The market sector in Europe is clearly in trouble, but when such an event occurs, it sometimes can provide an investment opportunity for the long-term shareholder.

Europe makes up approximately less than a quarter of Ford’s revenue. While this is clearly not immaterial, the profitability in America should cover this exposure. The company is doing the right thing; cutting costs in Europe and focusing on the most profitable parts of the world.

Ford has clearly broken its downtrend, as well as the triangle formation. While the company offers an interesting long-term investment opportunity, one should never rush into a stock. The automotive market sector still has several potential speed-bumps on the road, including the fiscal cliff and Europe.

The automotive market sector has two conflicting themes going forward. The first is an economy that’s growing slowly, while the second is the wind in their sails from an easy monetary policy that’s creating a resurgence in the housing market and car sales. The investment opportunity is clearly to err towards the bullish side long-term. The American fleet is aging, and the new vehicles built by all of the firms within the automotive market sector are far more fuel-efficient than ever before. One should be patient, and look for opportunistic entry points into stocks like Ford, as long as revenue continues to grow and the stock remains above its support levels.
at 12:05 AM 1 comment: Links to this post

Chart Of the Day 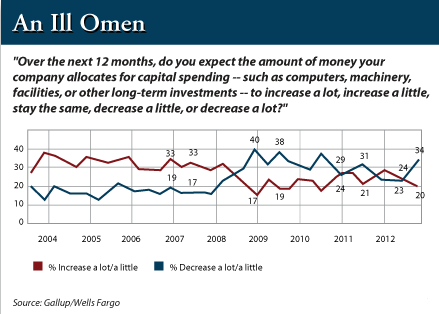 truthingold.com /
With gold prices being hammered in recent weeks, and trading near four-month lows on Wednesday, longtime gold bull Jim Rogers is sounding a word of caution, saying it’s possible the correction in bullion may continue into the new year.

“Just be careful, there’re too many bulls, including me, but I’m very cautious,” Rogers told CNBC.

“Gold is having a correction— it’s been correcting for 15-16 months now— which is normal in my view, and it’s possible that [the] correction is going to continue for a while longer.”

Gold prices have been gaining for over 12 straight years now, Rogers noted, adding that the safe haven asset has only seen a major correction once in that time period, during the global financial crisis back in 2008 when bullion fell 32 percent.

“Most things correct 30 percent every year or two, even in big bull markets – 30 percent corrections are normal and yet gold has only done that once in the past 12 years,” Rogers said. “Gold on any kind of historic market basis is overdue for a nice correction.”

Gold regained some strength on Wednesday after falling to its lowest level since August in the previous session of $1,661.01. Analysts said the progress in U.S. “fiscal cliff” talks has dented gold’s safe haven appeal, as investors turn to equities.
READ MORE

The "Chart of the Day" is Discovery Communications (DISCA), which showed up on Tuesday's Barchart "All-Time High" list. Discovery on Tuesday posted a new all-time high of $64.21 and closed +2.25%. TrendSpotter has been long since Dec 5 at $61.74. In recent news on the stock, NASDAQ OMX announced that Discovery would be one of the stocks added to its Nasdaq 100 index as a result of its annual index review. Discovery on Dec 14 announced that its board approved a $1 billion increase in its existing stock buyback program. Discovery Communications, with a market cap of $14 billion, is a global media and entertainment company that offers original and purchased programming in the United States and over 170 other countries with over 100 television networks.

So, it is surprising to see some Chinese stocks accelerating this year—a year that’s been difficult for the entire stock market. One such company is Bitauto Holdings Limited (NYSE/BITA), which is a small, but growing Internet company in China that sells marketing and Internet content services to the automotive industry. The company helps new and used automotive dealerships advertise their inventories online, and business is good.

Like many Chinese stocks, Bitauto had a tough year on the stock market in 2011, but the company’s share price has turned around and the numbers show a lot of growth. Bitauto’s stock market chart is featured below: 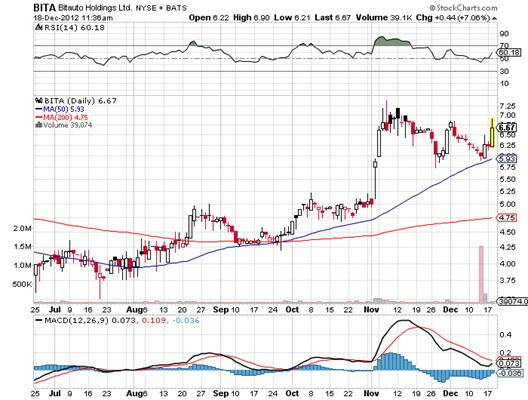 According to the company, its revenues in third quarter of 2012 grew 56% to $44.0 million. Non-GAAP earnings were $5.8 million, representing a gain of 27%. The company expects fourth-quarter revenues to be between $49.0 million and $51.0 million, representing growth of between 36% and 41% over the same-quarter last year.
at 12:02 AM No comments: Links to this post