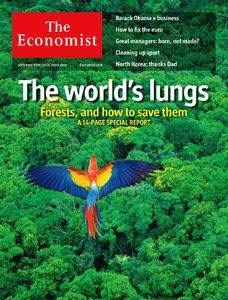 The Economist is a global weekly magazine written for those who share an uncommon interest in being well and broadly informed. Each issue explores the close links between domestic and international issues, business, politics, finance, current affairs, science, technology and the arts. 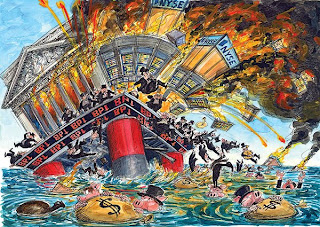 By Matt Taibbi,
The following is an article from the September 30, 2010 issue of Rolling Stone. This issue is available now on newsstands, and via Rolling Stone's premium subscription plan . To read the rest of the new issue, you must be a subscriber to All Access. Already a subscriber? Continue on to The Archives . Not a member and want to learn more? Go to our All Access benefits page .

It was sickening enough when British oil giant BP set new standards for corporate scumbaggery in the Deepwater Horizon oil spill, turning the Gulf of Mexico into its own personal toilet and imperiling entire species of wildlife in an attempt to save a few nickels. But with the Gulf geyser finally capped, there's still a way for BP to cause an even more unthinkable disaster: an AIG-style, derivative-fueled financial shitstorm. If the company decides to declare bankruptcy — a very real possibility with these bastards — it could trigger chaos in our casino system of finance, underscoring the insane levels of leverage and systemic risk we have left in place, even after the global economic crash of 2008.

The first serious whiff of trouble came on June 15th, when Barack Obama manned up and went on national TV to tell the nation that he wasn't going to let BP worm its way out of this one. "We will make BP pay for the damage their company has caused," he declared, vowing to push BP to set aside $20 billion to clean up its mess and compensate victims. (more)

Drought in Brazil, the world’s biggest producer of coffee, sugar and oranges, is harming crops and drying the Amazon River to its lowest in 47 years.

The Amazon’s 18-meter (59-feet) level on Sept. 20 was the least since 1963, disrupting transportation of food, fuel and medicines in northern Brazil, the National Water Agency said in an e-mailed statement. Growers in Brazil’s Southeast expect the drought will pare output of the nation’s key commodities.

Sugar rose to the highest price in seven months in New York today and has jumped 29 percent this month because of concern the South American drought threatens global supplies. Orange juice gained 15 percent this month and coffee soared 33 percent this year. The dry weather will persist at least until mid- October, said Willians Bini, a meteorologist at Sao Paulo-based weather forecaster Somar Meteorologia.

“Farmers will have to be really patient because rains are delayed for at least a month,” Bini said in a Sept. 20 telephone interview. (more) 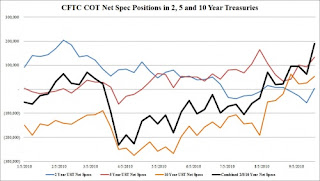 Before we present the traditional weekly charts summarizing the CFTC's Commitment of Traders report, we would like to present the literal surge in net spec positions in US Treasuries, across the 2, 5, and 10-Year spectrum. For the first time in 2010, net non-commercial spec positions for all three series are positive, and the cumulative across the three has surged to a 2010 high of 190,264 contracts. There may not be a bubble in treasuries (there is), but with every speculator now openly betting on a continued rise in USTs, it means someone has to take the other side of the trade. Kinda like when all those hedge funds holding Apple are hoping that nothing ever happens to Steve Jobs. (perhaps the irony that the fate of Apple and thus of the entire US stock market, rests in the fate of one very, very thin man, is worthy of its own post).

Commitment of Traders Financials
at 12:17 AM No comments: Links to this post

Alaska is one of the most prospective and yet most underexplored areas in the world. There are good reasons for the neglect, most notably the long, cold winters and the lack of infrastructure. Whether the latter is a result of, or a cause of, there being few people in the state is an open question.

One clear result, however, is a rather small economy: Alaska’s 2009 GDP was US$47.3 billion, comparable to that of the Dominican Republic or Bulgaria. The state is ranked 44th by GDP among its U.S. peers.

In terms of metals, Alaska produces gold, silver, copper, lead, and zinc. Being well endowed with natural resources, Alaska’s mining history dates back to the early 1800s, when Russian explorers prospected the region, looking for placer gold. But not until after Russia sold Alaska to the United States did exploration activities start to develop rapidly, both on placer and hard rock deposits.

Alaska has undergone not one but a series of gold rushes, the most famous being the 1890s Klondike Gold Rush, which actually centered on gold found just over the border in the Yukon Territory. That event drew many immigrants and spawned numerous settlements on the way to the Klondike, one of the principal routes having been through Alaska. Almost 13 million ounces of gold were produced by placer miners in the area. Since the end of the 19th century, mining has become an integral part of the state’s economy. (more)

Taleb Says Unawareness of Deficit Risk Has Him `Extremely Bearish' on U.S.

Nassim Nicholas Taleb, author of “The Black Swan,” said he’s concerned budget deficits in the U.S. are spiraling out of control and may now represent a bigger problem than in countries such as Greece.

“The U.S. is probably the worst of all,” Taleb told Canada’s BNN television network in an interview today. “They are addicted to debt. We have an administration that, unlike the European administrations, is not aware of the risks of mounting deficits, of the addiction to public deficits and to big government.”

Taleb told the cable network, “People are complaining about Greece, but Greece has the IMF putting some discipline in their system. Who can discipline the U.S. government?”

Greece this year has imposed a series of austerity measures, including wage and pension cuts and higher sales taxes, in exchange for a 110 billion-euro ($148 billion) rescue from the European Union and International Monetary Fund. U.S. President Barack Obama inherited what the National Bureau of Economic Research said this week was the deepest U.S. recession since the Great Depression. The government’s outstanding debt is about $13.5 trillion, according to Treasury figures. (more)

INVESTMENT STRATEGY IN A DEFLATIONARY ENVIRONMENT 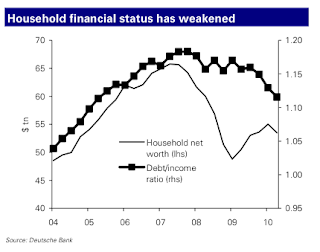 At least for now, Deutsche Bank is in the bond uber-bull camp:

Our rate forecast of 2% in the 10Y Treasury yield by the end of the year continues to be our view after the Fed’s statement that it was “prepared to provide additional accommodation if needed”. Chiefly, our rate view is based on the fundamentals of the economy. But the possible announcement of QE2 in November creates the possibility of the market overshooting compared to our rate forecast, with 10Y yields moving substantially below 2%.

We think that low interest rates will persist for the next several years, establishing a new equilibrium. The lasting period of low rates is due primarily to the following 4 factors: (1) The continued weakness of household balance sheets, with households repairing their balance sheets by reducing their spending over the next several years, (2) The payments on underwater mortgages will dampen spending and boost savings — a paper from the New York Fed stated that the savings rate would have to rise 0.8 percentage points, (3) The stagnation of firms’ pricing power, thereby raising the possibility of deflation, and making job growth difficult, and (4) Low potential GDP growth, with the CBO estimation of 2.1-2.3%, owing to the secular reduction in capital spending during the crisis. Thus the markets will likely have to adjust to a new growth level that is lower than the business cycle averages in the last several decades.
at 12:10 AM No comments: Links to this post 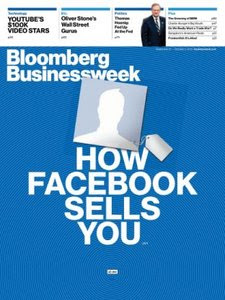 * Politics. Thomas Hoenig: Fedu Up At the Fed.

* Plus. The Greening of BMW.
- Charlie Munger's big mouth.
- Do we really want a trade war?
- Bangalore's american rivals.
- Frankenfish: it's alive!