Martin Pring: Commodity Prices Are About to Explode 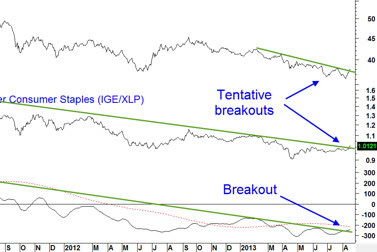 He writes today at Market Watch:
In June, I posted an article on MarketWatch entitled “Are commodity prices about to explode?” The question mark was there because a lot of ingredients were in place for a major rally, but I also pointed out that we really needed confirmation from some of the key averages.  (more)

It is nearly impossible to talk about chart patterns on stocks without eventually discussing the very common head and shoulders (H&S) pattern. An H&S pattern is a reversal pattern that forms after an uptrend. A textbook H&S pattern starts to form when a stock rallies to a point and then pulls back to a particular level (shoulder #1). Next, the stock will rally again, but this time to a higher peak (head) than the previous shoulder. After forming the head, the stock will pull back to the same support as the first shoulder did. Finally, the stock rallies a 3rd time, but not as high as the head (shoulder #2). The level that has been created by all 3 of the pullbacks is simply a support level referred to as the “neckline”. The formation of an H&S pattern warns of a potential reversal of the uptrend into a possible downtrend.

As with any chart pattern, a trader will usually not want to act on the pattern until the stock “confirms” the pattern. Confirmation is the break of the key level that has been created by the pattern. In the case of an H&S, confirmation would be when the stock breaks the neckline (support).

What some traders do not know is that H&S patterns can also form upside-down after a downtrend as well. This pattern would be called an inverse head and shoulders. It would also be considered a reversal pattern, and the neckline would be a resistance rather than a support. To see such a pattern possibly forming, please take a look at the 1-year chart of GG (Goldcorp, Inc.) below with my added notations: 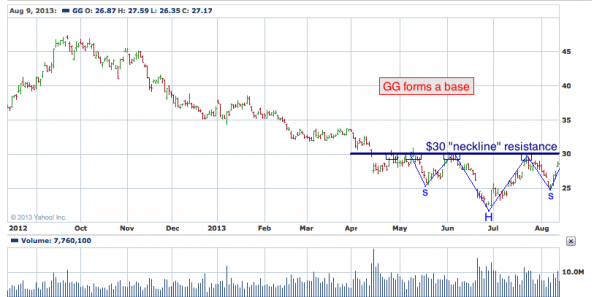 GG peaked at $47 back in September and worked its way lower until June. The stock seems to be forming an inverse H&S (blue) since May. I have noted the head (H) and the shoulders (s) to make the pattern more visible. GG’s neckline resistance is at the $30 level (navy). GG would confirm the pattern by breaking up through the $30 neckline, preferably on an increase in volume, and the stock should move higher from there.

Lastly, keep in mind that simple is usually better. Had I never pointed out this inverse H&S pattern, one would still think this stock is moving higher simply if it broke through the $30 resistance level. In short, whether you noticed the pattern or not, the trade would still be the same: On the break above the key $30 level.

The Tale of the Tape: GG seems to be forming an inverse head & shoulders pattern. A long trade could be entered on a break above the $30 level with a stop placed under that level.
Please share this article
at 12:05 AM No comments: Links to this post

The Farmers' Almanac is using words like "piercing cold," "bitterly cold" and "biting cold" to describe the upcoming winter. And if its predictions are right, the first outdoor Super Bowl in years will be a messy "Storm Bowl."

The 197-year-old publication that hits newsstands Monday predicts a winter storm will hit the Northeast around the time the Super Bowl is played at MetLife Stadium in the Meadowlands in New Jersey. It also predicts a colder-than-normal winter for two-thirds of the country and heavy snowfall in the Midwest, Great Lakes and New England.

"We're using a very strong four-letter word to describe this winter, which is C-O-L-D. It's going to be very cold," said Sandi Duncan, managing editor.  (more)

Corn, Soy Jump Most in More Than Year as Heat Hurts Crops

Corn jumped the most in 14 months and soybean futures rallied the most since 2011 as hot, dry Midwest weather threatens to erode crop yields in the U.S., the world’s biggest grower. Wheat also advanced.
Temperatures will average as much as 14 degrees Fahrenheit above normal during the next 10 days, with little rain expected in the Midwest, T-Storm Weather LLC said in a note to clients today. July and August will be the driest since 1936 in Iowa, Illinois and Indiana. Corn production will be 2.2 percent below the government’s forecast on Aug. 12, while the soybean harvest will be 3 percent less, Professional Farmers of America said Aug. 23, after a tour of crops in seven states last week. (more)

Watch For A Move In Natural Gas

Natural Gas has had a quiet year in terms of headlines. In 2011 and 2012 it was heavily tracked as it collapsed in price below $2.00 and as it popped hard all the way to $4.00. However, since topping out in mid 2013, natural gas has been on the decline since then as it fell all the way to almost $3.00 just a couple of weeks ago. However, one thing I noticed is that there has been a fairly orderly decline ever since natural gas put in its double top in mid 2013..
The Chart
Below is a daily chart of Natural Gas ($NG_F) futures. As you see, the selloff has been pretty orderly. No major pukes and it has been channeling on the way down. What I’m watching for here is a break above the channel (to possibly play it on the long side) or failure/a hold at the channel (to play it on the short side). The channel might not be the cleanest one I’ve ever seen but it’s there.
(There’s no guarantee I take a position, but it’s going to be interesting to watch to see how this resolves.)

Ocwen Financial Corporation, through its subsidiaries, engages in the servicing and origination of mortgage loans in the United States and internationally. The company’s Servicing segment provides residential and commercial mortgage loan servicing, special servicing, and asset management services to owners of mortgage loans and foreclosed real estate. This segment primarily offers services for subprime residential loans. Its Lending segment is involved in the origination, packaging, and sale of agency mortgage loans into the secondary market. Ocwen Financial Corporation was founded in 1988 and is headquartered in Atlanta, Georgia.

Please take a look at the 1-year chart of OCN (Ocwen Financial Corporation) below with my added notations: 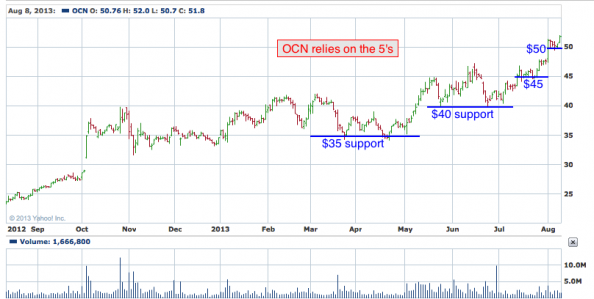 OCN had traded mostly sideways from October until breaking higher in May. Since March the stock has shown a tendency to always find support on the increments of $5 (blue). For example, in March and April $35 acted as support. Then $40 was support in May and June. There was support at $45 in July, and $50 here recently. So, identifying this trend should help when it comes to identifying when to enter a trade on OCN.

The Tale of the Tape: OCN is currently trading above the $50 level. A long position could be entered at $50 or on a break above $55 with a stop placed below the level of entry. If OCN breaks below $50, another long play could be made at $45.
Please share this article
at 12:03 AM No comments: Links to this post

Professor Laurence Kotlifoff of Boston University joined us to discuss the impact that rising interest rates will have on the US economy. He’s not overly alarmed. We talked about the real rate of inflation and the Thanksgiving Dinner Index. Then we went on to discuss The Inform Act which will require Congress to actually disclose the debts being shifted to future generations by the underfunded entitlement programs, which total in the hundreds of trillions. Also, Professor Kolikoff believes that Janet Yellen is the better choice to head the Fed as opposed to Larry Sommers.