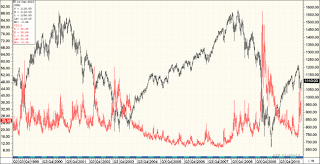 If you trade stocks, you may have heard the financial media talk about something called the VIX, also commonly referred to as the “fear index.” VIX stands for Market Volatility Index, and it represents how investors perceive volatility in the marketplace. The VIX tends to peak during times the stock market is falling or expected to fall sharply, and the VIX is typically at low levels during more stable or bullish markets, when investors aren’t too worried. When investors are worried, they will clamor to purchase options for protection, and options premium rises. You can trade futures on the VIX to speculate on potential movement in the S&P 500, or as a hedge for your equity portfolio during times of heightened volatility.

If you trade options, you probably know about the Black Scholes model of options pricing, which includes an estimate of volatility. The model’s limitation is that it must use an estimate for volatility in calculating the theoretical option premium, and that estimate may or may not bear out. The Chicago Board Options Exchange (CBOE), where most options in the U.S. are traded, developed a model to solve for the expected volatility using options prices in the S&P 100 and S&P 500. (more)

Investments That Crank Out Cash

Bill DeSio pulled off a neat trick during the crash: Even as his portfolio sank, he shrugged off his anxiety and scooped up blue-chip stocks on the cheap, making a killing. Today, more than a year later, the insurance executive from Springfield, Pa., is ready to change direction. Anxious about the stock market’s recent dips, the 63-year-old DeSio wants to lock in his gains. “I’ve been working all my life, and I don’t want to lose everything,” he says. But he’s not simply fleeing into savings accounts or CDs. Among his more intriguing buys are investments that generate a substantial stream of cash, including hybrid “convertible” bond funds that offer high dividends. His new mission: Get a significant income out of his portfolio, no matter what stocks do. (more)

The Error-Proof Portfolio: Look Before You Leap Into Busted Blue Chips

The Gulf oil spill is a tragedy by any definition, and it's hard to blame anyone for wanting to steer clear of

BP stock for its central role in the problem. But for contrarian-minded investors who can hold their noses, the big slide in BP shares may look like an opportunity, too. Any time a company of BP's reach and past profitability drops by nearly 50% in market value, it's only natural to wonder if it's time to give it a look.

To be honest, I have no idea what the "right" price is for BP--it could be $100, it could be $10. Morningstar's stock analyst on BP, Catharina Milostan, also gives her fair value estimate a very high uncertainty rating, meaning that the company's future liabilities are too open-ended to calculate with any certainty what the company is truly worth.

What I do know, however, is that it's a mistake to venture into any badly beaten-down, company--whether its BP,

Citigroup General Motors (now trading on the Pink Sheets as Motors Liquidation) or Enron--without a thorough analysis of all that could go wrong. (more)
at 12:43 AM No comments: Links to this post

Wall Street’s lowest-rated stocks have turned into this year’s best performers, a sign that analysts who underestimated the U.S. economy will boost their recommendations and trigger even bigger gains in equities.

Huntington Bancshares Inc., the regional lender in Columbus, Ohio, had twice as many “sell” ratings as “buys” in December and jumped 66 percent this year for the fourth- largest advance in the Standard & Poor’s 500 Index. Eastman Kodak Co. and Sunoco Inc. have gained more than 20 percent after more than 30 percent of the analysts covering them at the start of the year recommended getting rid of the shares.

Companies most dependent on U.S. growth have the highest proportion of “sell” ratings even as economists predict the fastest expansion since 2004. Banks, property developers and automakers rallied 12 percent on average this year. Investors say the bears will capitulate, providing the next catalyst for more stock gains. (more)
at 12:37 AM No comments: Links to this post

It's June In Florida 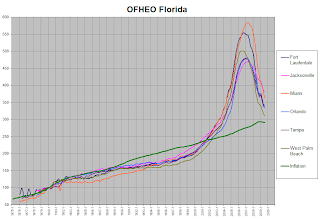 In the Florida land boom of the '20s, promoter Carl G. Fisher hired a huge, lighted billboard in Times Square in New York. It advertised that "It's June in Miami," a claim that was fraudulent 11/12ths of the year. In June, it was just too bad.

South Florida is entering its fourth year of a property slump. Places sell for about half of what they brought three years ago. The retail building across the street is half empty. Signs are everywhere: "Office for rent." "Ocean front lot for sale." "Commercial space available." Here in Delray Beach, the sun is shining. The grass is growing. Waves caress the shore. But our hotel is nearly empty. Many restaurants on Atlantic Avenue are closed. The streets are so quiet the city seems like a ghost town. Then again, it's so hot and sweaty, even the ghosts wilt. (more)

The March 2004 issue of The Elliott Wave Theorist postulated a 7-year crisis cycle going back to 1973 and used it to predict another crisis in 2008. Here are the table and the forecast from that issue:

Extract from the International Forecaster of 16 June 2010 :"US MARKETS
Were it not for the Federal Reserves purchase of Treasury and Agency bonds the US would already be unable to raise funds to service debt and issue new debt, and it would already have descended into national bankruptcy. It is no wonder the Fed does not want to be audited. Through various artifices the Fed has been purchasing US treasury paper. No one knows how much, because when asked the Fed says it is a state secret. That is what all Americans love. A country run in secrecy. A privately owned corporation operating under the cover of secrecy, and protected by a Treasury Department, that is under the control of the Fed’s owners. How is that for an incestuous relationship?
Government is desperately searching for more revenue to cover its massive deficit spending and to service existing mandatory programs. Taxes are being increased; some 19 new taxes, in the recently passed medical reform legislation. Unfortunately this isn’t enough. Of course, there is never enough."
at 12:09 AM No comments: Links to this post

The High Probability of an Irrational Gold Bubble

Ben Bernanke is confused. And no, it’s not just the monetary system that continues to confound him. This time it’s gold prices. During Wednesday’s Congressional testimony, Bernanke was asked about the surging price of gold and if that is a sign of no confidence in fiat currencies. He responded:

“Well the signal that gold is sending is in some ways very different from what other asset prices are sending. For example, the spread between nominal and inflation index bonds remains quite low – suggesting just 2% inflation over the next 10 years. Other commodity prices have fallen recently quite severely including oil prices and food prices. So gold is out there doing something different from the rest of the commodity group. I don’t fully understand the movements in the gold price, but I do think there’s a great deal of uncertainty and anxiety in financial markets right now and some people believe that holding gold will be a hedge against the fact that they view many other investments as being risky and hard to predict at this point.” (more)
at 12:04 AM No comments: Links to this post

Another 'Flash Crash' Coming? Some Market Pros Think So 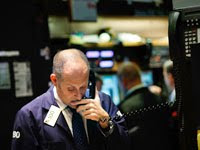 The May 6 "flash crash" may be history, but its after-effects—and threat to the stock market—continue to loom large after two recent mini-crashes in individual stocks.

Regulators have characterized the initial flash crash, which saw the Dow lose nearly 1,000 points in a matter of minutes, as a one-off occurrence possibly attributable to a "fat finger" trade or some other market anomaly.

But a growing chorus of traders and legislators believe the flash crash is symptomatic of a larger problem with high-frequency trading and a market that lacks visibility and is susceptible to similar events in the future.

"We have a global economy and a global trading system, but we don't have a global framework to deal with it yet," says Doug Roberts, chief investment strategist at Channel Capital Research. "Until you do, you're going to be prone to this. With the average investor, they're going to want to be a little bit more conservative." (more)
at 12:02 AM No comments: Links to this post