Groupon, Inc. operates as a local commerce marketplace that connects merchants to consumers by offering goods and services at a discount in North America and internationally. The company also offers deals on products for which it acts as the merchant of record. It offers deals in various categories, including food and drink, events and activities, beauty and spa, fitness, health, home and auto, shopping, and education. The company emails its subscribers discounted offers on goods, services, and travel targeted by location, purchase history, and personal preferences. It also enables its customers to access its deals directly through its Website and mobile applications.
To review Groupon's stock, please take a look at the 1-year chart of GRPN (Groupon, Inc.) below with my added notations: 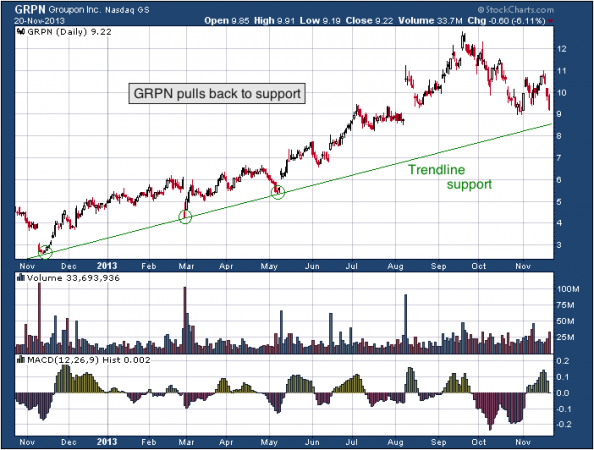 Over the last 12 months GRPN has consistently moved higher, although it has been pulling back since September. During its uptrend that stock has formed a key trendline of support. Always remember that any (2) points can start a trendline, but it's the 3rd test and beyond that confirm its importance. GRPN's trendline seems to be important since it has been tested on 3 different occasions.

Get Ready For A Worldwide Depression & Historic Social Unrest

With gold and silver being smashed once again, today a man who has been involved in the financial markets for 50 years, and whose business partner is billionaire Eric Sprott, warned King World News that investors need to prepare for an epic worldwide depression and unprecedented social unrest. He also discussed gold and silver. Below is what John Embry had to say in this powerful and timely interview.
Embry: “What really caught my attention was the brilliant interview you did with Egon von Greyerz yesterday. He addressed a point that is missed by a lot of people. Everybody seems to think that with all of the problems in the West that the Chinese economy will save us because of the growth phenomenon that’s been going on over there for the past 20 years….
Continue Reading at KingWorldNews.com…
Please share this article
at 12:05 AM No comments: Links to this post

Chart Of The Day: The Fed Now Owns One Third Of The Entire US Bond Market

The most important chart that nobody at the Fed seems to pay any attention to, and certainly none of the economists who urge the Fed to accelerate its monetization of Treasury paper, is shown below: it shows the Fed's total holdings of the entire bond market expressed in 10 Year equivalents (because as a reminder to the Krugmans and Bullards of the world a 3 Year is not the same as a 30 Year). As we, and the TBAC, have been pounding the table over the past year (here, here and here as a sample), the amount of securities that the Fed can absorb without crushing the liquidity in the "deepest" bond market in the world is rapidly declining, and specifically now that the Fed has refused to taper, it is absorbing over 0.3% of all Ten Year Equivalents, also known as "High Quality Collateral", from the private sector every week. The total number as per the most recent weekly update is now a whopping 33.18%, up from 32.85% the week before. Or, said otherwise, the Fed now owns a third of the entire US bond market.

At this pace, assuming Janet Yellen keeps delaying the taper again and again over fears of how "tighter" financial conditions would get, even as gross US bond issuance declines in line with the decline in deficit funding needs, the Fed will own just shy of half the entire bond market on December 31, 2014... and all of it some time in 2018.
Please share this article
at 12:04 AM No comments: Links to this post

The stock was close to dead at the start of 2009. Wallowing in the penny stock nether land of under $0.05 per share, this company was all but delisted during these dark days. In fact, it was on the Nasdaq's watch list for delisting despite being among the exchange's most active name at the time. And while facing stiff competition from upstart Internet-based services, this company has battled back from the brink and is setting up to be a solid investment right now.
In case you haven't guessed it, I am talking about Sirius XM Holdings (NASDAQ: SIRI). Truth be told, I am a diehard Pandora (NYSE: P) user when it comes to alternative radio sources. In fact, I have written several articles on how much I like Pandora as a service and an investment.
However, I recently purchased a new vehicle that came with a free 90-day trial of Sirius radio, and I was impressed. While Pandora can get stale with only music you like and similar being played, Sirius sounded fresh and new. There is something to be said for listening to the wide variety of programming Sirius provides such as music, comedy, sports and interesting talk shows. To put it bluntly, Sirius takes the crown when it comes to variety, making Pandora look like a one-trick pony.  (more)

If you want to make money investing abroad, I suggest you listen to Chris Mayer.
Chris is the editor of the Capital & Crisis newsletter. He spends most of his time traveling to developed and non-developed nations in search of the next big idea. In the last five years, he's visited over 30 countries.
I caught up with Chris this week on my S&A Investor Radio podcast. He talked about the huge long-term potential in places like China and Africa. But one of his suggestions caught me by surprise...
Chris is putting money to work in Russia.
Russia is dirt-cheap. As measured by the RTS Index (a capitalization-weighted index made up of the highest-capitalized stocks in Russia), Russian stocks trade at about six times earnings... and pay a 4% yield.
Russian stocks are so cheap because no one wants to invest there...
Russia is known as a tough place to do business. Last year, Russia ranked 133 out of 176 countries on the Corruption Perceptions Index. And the National Anti-Corruption Committee estimates that the cost of bribes and nepotism in Russia totals $300 billion each year.
But Chris sees a huge opportunity to make money... You see, the last time Russia traded at these valuations was in 2009. And Chris told his subscribers to buy the Market Vectors Russia Fund (RSX). RSX holds a basket of Russia's largest companies.
At the time, RSX was trading at $12 a share. In just 24 months, RSX rose to $40. That's a gain of more than 230%. 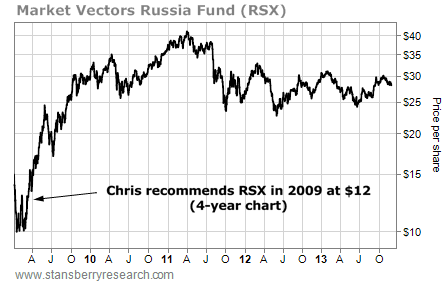 Today, Chris calls Russia "the world's cheapest emerging market." And he suggests investors put money back to work in RSX.
Chris believes we could see similar gains over the next 24 months buying RSX right here. More important, with the index trading at just six times earnings, the downside risk is limited.
He has one of the best track records for investing abroad. And the last time he recommended investing in Russia, his subscribers saw huge gains.
I suggest following his advice this time around. At current valuations, Russian stocks look like a steal.
Please share this article
at 12:03 AM No comments: Links to this post

Hospira, Inc. provides injectable drugs and infusion technologies to develop, manufacture, distribute, and markets products worldwide. The company offers specialty injectable pharmaceuticals, which include approximately 200 injectable generic drugs in multiple dosages and formulations; proprietary specialty injectables, including Precedex, a proprietary drug for sedation; and Biosimilars that comprise Retacrit, a biosimilar erythropoietin, which is primarily used in the treatment of anemia in dialysis and in certain oncology applications, as well as Nivestim, a biosimilar filgrastim used for the treatment of low white blood cells in patients who have received a chemotherapeutic agent. It also provides intravenous solutions and nutritional products; and contract manufacturing services. In addition, the company offers medication management products consisting of infusion pumps and dedicated administration sets; Hospira MedNet safety software system and related services; software applications and devices that support point-of-care medication administration; gravity administration sets; and other device products.
To review Hospira's stock, please take a look at the 1-year chart of HSP (Hospira, Inc.) below with my added notations: HSP has been trading sideways for the last 5 months. Over that period of time, the stock has formed a clear resistance level at $42 (red). In addition, the stock has also created a strong level of support at $38 (blue) that has held since the beginning of July. At some point the stock will have to break one of those two levels.

The Tale of the Tape: HSP has clear levels of support ($38) and resistance ($42). The possible long positions on the stock would be either on a pullback to $38, or on a breakout above $42. The ideal short opportunity would be on a break below $38.
Please share this article
at 12:03 AM No comments: Links to this post