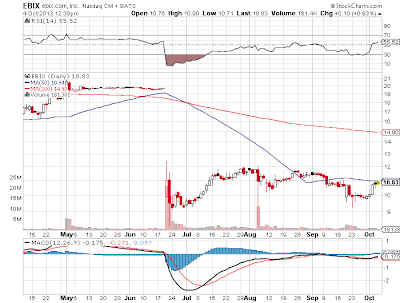 It wasn't that long ago that the technology-heavy Nasdaq Composite (NASDAQINDEX: ^IXIC  ) was hitting a 13-year high. Sure, the government shutdown took a bit of wind out of the Nasdaq's sails, but overall it's been an incredible ride for an index that is now up 201% from its March 2009 closing low.

It's not hard to understand why so many high-growth stocks are feeling the love as interest rates sit near record lows, which is allowing for debt refinancing and borrowing at very attractive levels. In other words, few tech companies have to worry much about lending rates and are instead focused on expanding as fast as they can.

As we do each month, let's take a look at the Nasdaq's five most hated companies -- in essence, the five most short-sold stocks. Why? So we can see what characteristics they might share in order to avoid buying into similar companies that have drawn the ire of short-sellers.

Here are the five most hated Nasdaq components as of Oct. 1: (more)

The Tesla Dilemma: To Sell or Not to Sell? : TSLA 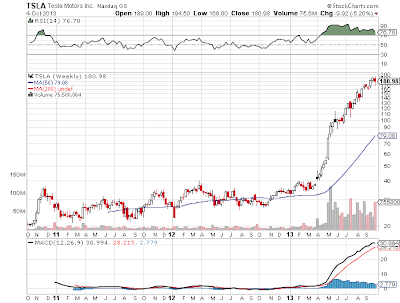 "Our favorite holding period is forever," Warren Buffett has famously said. But even the Oracle of Omaha sells stocks at times. He has even expressed regret in not selling his beloved Coca-Cola stock when it became wildly overvalued in the late '90s. In reference to its wild run-up, Buffett confessed his mistake in the 2004 Berkshire Hathaway letter to shareholders:


Berkshire's results would have been far better if I had caught this swing of the pendulum ... I can properly be criticized for merely clucking about nose-bleed valuations during the Bubble rather than acting on my views. Though I said at the time that certain of the stocks we held were priced ahead of themselves, I underestimated just how severe the overvaluation was. I talked when I should have walked.


So what is the best practice? Should you let your winners run? Or should you cash out when your stocks become overvalued? (more)

Here’s Why Twitter Isn’t Profitable, and It’s Not Getting Better 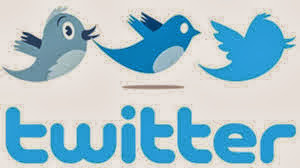 Twitter publicly released its initial public offering registration statement late on Thursday and it was filled with tons of data about the fast-growing social network’s finances.


Some were expecting the company would be showing at least some profits, but Twitter reported a net loss of $69 million for the first half of 2013.

Looking through Twitter’s financial results, one number seems potentially out of whack for a major, public tech company, especially one that could soon have a stock market value of $15 billion to $20 billion. Twitter spent a whopping 44% of its revenue, or almost $112 million, on research and development through the first half of 2013.


Facebook (FB) spent 19% of its revenue on R&D over the same period. Review listing app Yelp (YELP), which has a market cap under $5 billion, spent 15%. LinkedIn (LNKD), valued at $27 billion, used 26%. Bigger companies spend far less even than that. Apple (AAPL) allocated just 2.5% of its revenue to R&D over the nine months ended June 30.  (more)

By Jeff Pierce
Something very strange is going on with crude when viewing the commitment of traders activity of hedgers vs speculators. Usually these two groups move opposite each other, but since the beginning of summer they’ve been moving upwards in sync. This never happens when viewing commodity charts.
Recently I felt we would retest the $99-$100 level and that is happening right now. There is an outside chance we go down to the $96-97 and touches the top of the trendline (2nd chart below) but I would say those odds are around 20%.
9yr expanded chart of Crude - this will really give a good idea of how these 2 groups are nearly inverse each other.

The above chart is from Spreadcharts, which offers a variety of charting tools such as: Commodity futures & spreads, Seasonality analysis, Volume & OI comparison, Commitment of Traders and Long-term historical data. To learn more click here. 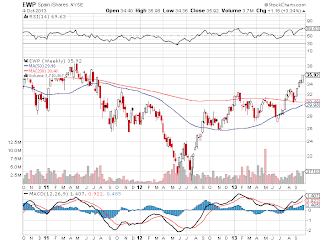 The U.S. markets continue to rise this year and reached a new all-time high again last month. This is primarily attributable to an improving labor market, solid retail data and a recovering housing market. The recent surprise move by of the Fed of keeping the $85 billion bond purchase program unchanged gave further boost to equity markets across the globe.