James Dines: Founder of The Dines Letter & Acclaimed Author - He is legendary for his bull market predictions including correct forecasts that were in complete contradiction to the rest of the financial community. In an industry where it takes courage and conviction to go against the crowd, Mr. Dines defiantly warned investors of the "invisible crash" that would bring down stocks in 1966, the unexpected gold boom of 1974, the Internet revolution of 1996, the market top in 2000, the “Coming Uranium Boom” and more. (click here for audio)

The price of silver reached a 5-month high this past week as investor interest seems to have been rekindled in both gold and silver as belief in financial markets increases that the latest round of monetary easing from the Federal Reserve – QE3 – will soon be on its way. Many investors had largely stayed away from silver in recent months after some had got caught up in its volatility. Silver had touched a 30-year high in April 2011 before plunging 35 percent in a few short weeks.

Now the volatility is back – but on the upside – as prices have climbed more than 20 percent in less than a month. The gains have outpaced that of gold which rose roughly 10 percent during the same time frame. Importantly for investors, the ratio between the two precious metals has moved about 10 percent in silver’s favor since mid-August. This is the first time silver has outperformed gold since the start of 2012.

Some may wonder why has silver outperformed gold in the past several weeks? The answer goes deeper than just confidence that QE3 is coming soon, but it is still rather a simple one. The sharp rally in silver was fueled largely by short-covering. That is, some investors (hedge funds, etc.) had made rather large bets that silver would continue falling and were caught off-guard by its recent rise. According to data from the Commodities Futures Trading Commission, the silver market during the week of August 27-31 saw the largest amount of short-covering since May 2011. At the same time. Bloomberg reported that hedge funds were the least bullish on silver in almost four years.

It is unknown for how long silver will outperform gold. But even some long-term fundamental investors such as legendary commodities investor Jim Rogers has said that he believes silver right now is a better investment than gold. He points to the fact that historically gold has been worth about 12 to 15 times what silver is worth, but that recently it has been worth roughly 50 times silver’s value. Silver is also the only major commodity not to have reached a new all-time high in the decade-long commodity bull market and is still cheaper than it was 32 years ago.

So it may be worth a look. But since silver is so volatile, wait for a downward spike before initiating or adding to a long position.

Gold is breaking out of long period consolidations. Lots of them. For example, gold in terms of Euros is getting close to its all time high. The Gold:Euro exchange rate is challenging its February turning high and appears to be breaking out of a wide triangular consolidation as evidenced by the graph below which compares the gold price to the Euro Index (as a proxy for the Euro itself). 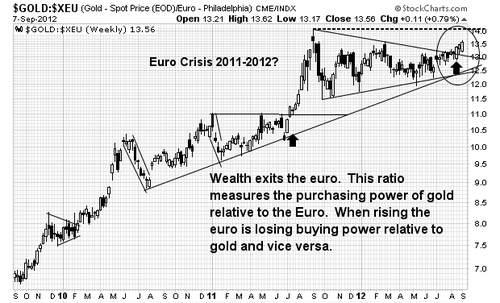 
Breakouts (or breakdowns) from long-period consolidations indicate that the myriad conditions which conspired to contain the trading within the technical pattern are now changing. Breakouts are a signal that money flow has turned positive for the issue, meaning more liquidity is flowing into it than out of it.

Triangular consolidations are often continuation patterns that resolve in the direction of the prevailing trend sooner or later.

Note the label “Euro Crisis 2011-2012?” The question mark is not whether there has been a crisis for the period; that is self-evident. It is there to denote our skepticism that the European crisis ends this year.

With European reliance on socialist central planning, technocrats and anti-productive, highly producer-discouraging tax policies, we seriously wonder whether the crisis on ‘The Continent’ will end this decade.

For contrast, below is the same chart using the Canadian Dollar Index as a proxy for the Loonie. The smaller, but better-managed (so far) Canadian Dollar reflects market perceptions that the government in Ottawa has been more responsible and somewhat less profligate than their neighbors to the immediate south. Thus, the Canuck buck is farther from challenging its purchasing power lows (gold purchasing power highs) than the Euro, but clearly it too is breaking out of a consolidation. (more)

ROB KIRBY: The MASSIVE Crimes of LIBOR, And the Outlook For Our Currency: WORTHLESS

Rob Kirby of Kirby Analytics.com joins me to explain the depth and breadth of the MASSIVE LIBOR rigging crimes, which started in 2007-2008. Rob says Barclay’s involvement is merely the tip of the iceberg, and that the crimes of LIBOR began at the U.S. Treasury and the Exchange Stabilization Fund (ESF). In Part 2, Rob describes the very dire outlook for America when the dollar is no longer the world’s reserve currency. Rob also expresses his fear for America’s citizens given the ever-expanding police state. Rob says he will never step foot in the United States again, at least not until Liberty is recovered.

The "Chart of the Day" is Illinois Tool Works (ITW), which showed up on Friday's Barchart "All-Time High" list. ITW on Friday posted a new all-time high of $61.10 and closed +1.49%. TrendSpotter has been long since Aug 3 at $55.62. In recent news on the stock, ISI Group upgraded ITW to Buy from Hold. BMO Capital on July 26 initiated coverage on ITW with an Outperform and a target of $62. Illinois Tool Works, with a market cap of $27 billion, sells fasteners and components, equipment and consumable systems, and a variety of specialty products and equipment.

As financial insecurity and instability rise, hedging becomes increasingly important as a means of capital preservation. One potential hedge is diversifying one's liquid capital by holding some cash in a "safe haven" foreign bank account.

Two signs that fear and instability have reached critical mass are capital flight and capital controls. Capital flight is people and enterprises moving their capital (cash and liquid assets) to an overseas "safe haven" to avoid devaluation of the currency or confiscation of their capital/assets. (Devaluation can be seen as one method of confiscation; high taxes are another.)

Capital controls are the Central State's way of stemming the flood of cash leaving the country. Why do they want to stop money leaving? If we think of each Central State as a neofeudal fiefdom, we understand the motivation: citizens are in effect serfs who serve the State and its financial nobility. If the serfs move their capital out of the fiefdom, it is no longer available as collateral for the banks and a source of revenue for the State.

Once capital has drained away, borrowing and lending shrink, cutting off the revenue source of the banks (financial nobility). Since financial activity also declines as cash is withdrawn from the system, the State's "skim"--transaction fees, sales taxes, VAT taxes, income taxes, wealth taxes, etc.--also declines. Both the State and its financial nobility are at increasing risk of decline and eventual implosion as capital flees the fiefdom. (more)

Gold has risen to new record highs in euro terms overnight in Asia when gold consolidated on last week’s 3% gains and rose above €1,360/oz for the first time.

Significant consolidation has been seen in the last year between €1,200/oz and the previous record high at €1,359.01/oz. This record high was seen almost exactly a year ago on September 9th 2011.

This consolidation will likely give rise to further weakness in the euro versus gold in the coming weeks. The record high shows an increasing lack of investor confidence in the single currency. (more)
at 12:03 AM No comments: Links to this post