Sinclair: “I think it’s critically important for investors to realize that the COMEX warehouse is not going to wait for significant further declines in their inventories before they adjust their settlement mechanism.
Yesterday we pointed out that during the Hunt crisis there was this type of adjustment made by the COMEX Board of Directors. We also quite clearly demonstrated that there is a strong correlation between the present lack of supply in the gold market and what happened back in 1980.
So any further significant drawdowns on the COMEX warehouse are going to cause to the COMEX go to a new type of settlement….
Jim Sinclair continues @ KingWorldNews.com
Please share this article
at 12:06 AM No comments:

The Market & Cycles – Why We Must Crash & Burn

One Response regarding this problem that we must crash and burn states that this “is somewhat of a paradox though, see some people, not so conflicted by their personal conscience (against obedience to authority / control ), but influenced by their uncertainty and/or lack of confidence. obviously, not all people are the same. Guess for the higher circumscribed step, to a world Government, should always pass through crash and burn stages, as history dictates, can never take the step smoothly:) ?

ANSWER: This is what makes cycles function. (1) there is the overall cycle of the economy such as the ECM, (2) then there are the cycles of individual markets that each has its own unique frequency like DNA, and finally (3) each of us has a personal cycle of life through which we pass, mature, and hopefully learn from our mistakes.

We all have our individual cycle of life, experience, and knowledge. We buy the high and sell the low in our youth. As we grow older, we realize we have been there, done that. Wisdom emerges and we then sell the high and buy the low. Not everyone is in the same position or place within the cycle. This is what makes the world tick. (more)

Lions Gate Entertainment Corp., an entertainment company, engages in motion picture production and distribution, television programming and syndication, home entertainment, family entertainment, digital distribution, new channel platforms, and international distribution and sales activities. The company operates through two segments, Motion Pictures and Television Production. The Motion Pictures segment engages in the development and production of feature films; acquisition of North American and worldwide distribution rights; North American theatrical, home entertainment, and television distribution of feature films produced and acquired. The Television Production segment is involved in the development, production, and worldwide distribution of television productions, including television series, television movies and mini-series, and non-fiction programming. The company distributes a library of approximately 13,000 motion picture titles, television episodes, and programs directly to retailers, rental kiosks, and pay and free television channels through various digital media platforms in the United States, Canada, the United Kingdom, and Ireland, as well as indirectly to other international markets through its subsidiaries and various third parties.
To review Lions' stock, please take a look at the 1-year chart of LGF (Lions Gate Entertainment Corp.) below with my added notations: 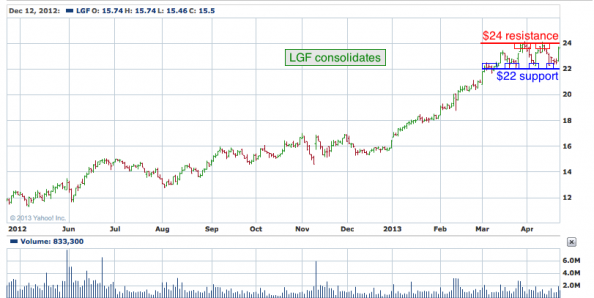 For the last (2) months LGF has been stuck within a common pattern known as a rectangle. Rectangle patterns form when a stock gets stuck bouncing between a horizontal support and resistance. A minimum of (2) successful tests of the support and (2) successful tests of the resistance will give you the pattern. LGF's rectangle pattern has formed a $24 resistance (red) and a $22 support (blue). A break above $24 would also be a new 52-week high.
The Tale of the Tape: LGF has formed a rectangle pattern. The possible long positions on the stock would be either on a pullback to $22, or on a breakout above $24. The ideal short opportunity would be on a break below $22.
Please share this article
at 12:05 AM No comments:

The world is heading into a horrific economic nightmare, and an inordinate amount of the suffering is going to fall on innocent children.  If you want to get an idea of what America is going to look like in the not too distant future, just check out what is happening in Greece.  At this point, Greece is experiencing a full-blown economic depression. And as you will read about below, child hunger is absolutely exploding in Greece right now.  Some families are literally trying to survive on pasta and ketchup.  But don't think for a moment that it can't happen here.Sadly, the truth is that child hunger is already rising very rapidly in our poverty-stricken cities.  Never before have we had so many Americans unable to take care of themselves. Unfortunately, more poor families slip through the cracks with each passing day, and these are supposedly times in which we are experiencing an "economic recovery".  So what are things going to look like when the next major economic downturn strikes? (more)


If you are a regular main street investor, you may never heard of Ned Davis.
If you are a market technician, however, you certainly have –  Ned Davis may be the single most highly respected Technical Analyst working today.
The 67 year old Davis began Ned Davis Research (NDR*) in 1980. The firm quickly developed a reputation as independent, institutional research company by offering unbiased, in-depth financial analysis. Compared to compromised wirehouse research, NDR was driven instead by sophisticated analytic tools and data integrity. (See this year 2,000 article for a deep dive into the firm).
Ned was a regular on Louis Rukeyserer, and frequently graces the pages of Barron’s. Typical observations: In October 2012, Davis said the data suggested Gold was Facing ‘Excessive Optimism’.
If you want to know if its worth your time to spend an hour with this legendary technician, consider what Ned calls the four basic traits of successful investors:


1. They look at objective indicators. Removing the emotions from the investing process, they focus on data instead of reacting to events;
2. They are Disciplined:  The data drives decision making with pre-established rules. External factors do not influence them;
3. They have Flexibility:  The best investors are open-minded to new ideas, or revisiting previous thoughts;
4. They are Risk adverse: Not always obvious to investors, it is a crucial part of successful investing.

Last weekend the disturbingly-brilliant Catherine Austin Fitts, publisher of the Solari Report, passed through town, giving us a chance to finally meet face-to-face. In the following excerpt from a much wider-ranging talk she explains the deeper, more sinister reasons for the recent action in precious metals.
DollarCollapse: It’s great to finally meet you, Catherine. The timing couldn’t be better, what with the recent, um, correction in gold and silver. What’s your take: was it driven by fundamentals or manipulation?
Catherine Austin-Fitts: We’re in a world where we have markets and we have management, so the question is which is dominant at any given time. In terms of fundamentals, the global economy is slowing, no doubt about that. The timing of the big drop in precious metals coincided with an announcement that growth in China had slowed. So there’s lower growth, particularly in the markets where there’s big demand for gold. (more)

zerohedge.com / by Tyler Durden / 04/25/2013 17:30 -0400
We are confident that in the aftermath of our article from last night “Just What Is Going On With The Gold In JPMorgan’s Vault?” in which we showed the absolute devastation of “eligible” (aka commercial) gold warehoused in JPM’s vault just over the Manhattan bedrock at 1 Chase Manhattan Place (and also in the entire Comex vault network in the past month), we were not the only ones checking every five minutes for the Comex gold depository update for April 25. Moments ago we finally got it, and it’s a doozy. Because in just the past 24 hours, from April 24 to April 25, according to the Comex, JPM’s eligible gold plunged from 402.4K ounces to just 141.6K ounces, a drop of 65% in 24 hours,and  the lowest amount of eligible gold held at the vault on record, since its reopening in October 2010!
Everyone has seen what a run on the bank looks like. Below is perhaps the best chart of what a “run on the vault” is.

READ MORE
Please share this article
at 12:03 AM No comments: