Chart of the Day : Corn 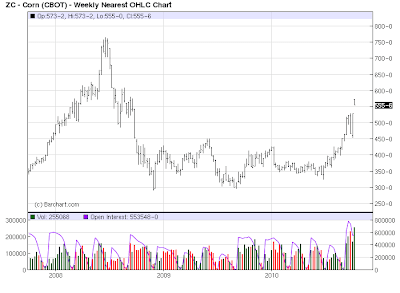 DOW JONES NO LOSS TRADE. LEARN HOW.
at 12:20 AM No comments: Links to this post 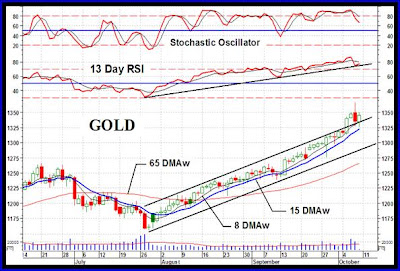 Is it the economy, is it world tensions, who cares, the precious metals just keep on going higher and higher. Where they will stop nobody knows. But they will stop sometimes. Tomorrow or next year, that’s the question?

The price of gold has been in a blazing up trend for over two months now. It had been trapped inside a well defined and narrow up trending channel but this past week moved above the channel upper resistance line. Whether this is a warning of future sharp up moves or just a very short term blip on the chart remains to be seen. It may be setting itself up for a new trend that is more aggressive than the past two months but as mentioned, that remains to be seen. The intermediate term momentum indicator had also been in a well defined upward tracking channel and this past week moved out of the channel, but only for a couple of days. It closed the week back inside the channel. The same for the volume indicator. It broke above its channel upper line but by the end of the week was back inside the channel, although right at the upper levels of the channel. (more)

The illusion of a "weak recovery” – language the government prefers to “double dip recession” – continues being perpetuated by monthly “reporting errors” of economic data.

Just as the Census Bureau’s August report of a small gain in July residential housing starts was due to a downward revision of the prior month’s report, the Federal Reserve Board’s September 15 report of a slight increase in industrial production was achieved by revising downward July’s initial reporting. The optimistic July report made July look good, and the downward revision of the optimistic July number made August look good. It is by such means that the public is being fooled into believing a recovery is underway.

Many forecasters and policymakers continue to expect a recovery, because postwar Keynesian macroeconomics (demand management) is operating at full blast. According to Keynesian gospel, the two main components of expansionary economic policy are low interest rates and government deficit spending. Keynesians view supply as essentially passive, merely a response to government policy, which can be adjusted as needed to produce the desired expansionary result. (more)

The interesting part of growing older, that my wife and I have noticed, is the appearance that time speeds up. As each month that passes turns into years, as a 60+-year-old I'm feeling the passage of time quite differently than a child would; a year to me feels more like a month, whereas a month in a child's life feels like a lifetime. Needless to say, I'm still encouraged to continue my favorite pastime of tracking the fluctuations in the cost of living, and my fascination with prices and values has not waned one bit. Also, my wife's frugalness and aversion to throwing food away has made me very curious about commodity prices, so recently I did some research and discovered the facts weren't pretty. Below are some Commodity Price increases over the past year:

Yep, looking at key raw material prices compared to last year, the recession is over. These prices are getting loaded into the system now and will flow through to the consumer in higher prices to come at the supermarket and elsewhere. (more)

Originally appearing in The Objectivist, an editorial perspective explicitly based on Ayn Rand's philosophy of Objectivism, Greenspan's brilliant exposition urged citizens to keep their politicians accountable through a gold standard.

Greenspan continues in his essay advocating gold as a critical element of any monetary organization. He concludes:

In the absence of the gold standard, there is no way to protect savings from confiscation through inflation. There is no safe store of value. If there were, the government would have to make its holding illegal, as was done in the case of gold. If everyone decided, for example, to convert all his bank deposits to silver or copper or any other good, and thereafter declined to accept checks as payment for goods, bank deposits would lose their purchasing power and government-created bank credit would be worthless as a claim on goods. The financial policy of the welfare state requires that there be no way for the owners of wealth to protect themselves.

This is the shabby secret of the welfare statists’ tirades against gold. Deficit spending is simply a scheme for the confiscation of wealth. Gold stands in the way of this insidious process. It stands as a protector of property rights. If one grasps this, one has no difficulty in understanding the statists’ antagonism toward the gold standard. (more) 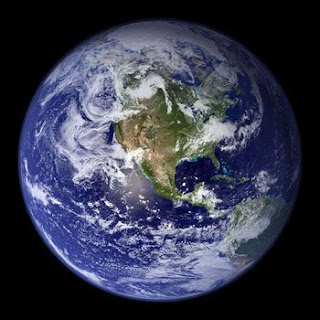 The Institute of International Finance, a group that represents 420 of the world's largest banks and finance houses, has issued yet another call for a one-world global currency, Jerome Corsi's Red Alert reports.

"A core group of the world's leading economies need to come together and hammer out an understanding," Charles Dallara, the Institute of International Finance's managing director, told the Financial Times.

An IIF policy letter authored by Dallara and dated Oct. 4 made clear that global currency coordination was needed, in the group's view, to prevent a looming currency war.

"The narrowly focused unilateral and bilateral policy actions seen in recent months – including many proposed and actual measures on trade, currency intervention and monetary policy – have contributed to worsening underlying macroeconomic imbalances," Dallara wrote. "They have also led to growing protectionist pressures as countries scramble for export markets as a source of growth."

Dallard encouraged a return to the G-20 commitment to utilize International Monetary Fund special drawing rights to create an international one-world currency alternative to the U.S. dollar as a new standard of foreign-exchange reserves.

Likewise, a July United Nations report called for the replacement of the dollar as the standard for holding foreign-exchange reserves in international trade with a new one-world currency issued by the International Monetary Fund. (more) 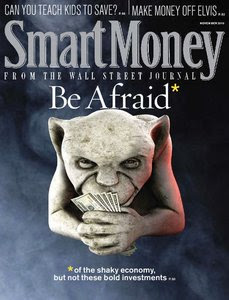 read more here
at 12:13 AM No comments: Links to this post

(Reuters) – Sovereign debt risk in Europe and continued real estate woes in the United States have dealt a setback to global financial stability in the past six months, the International Monetary Fund said on Tuesday.

The IMF said risks to the financial sector could be reduced if legacy problem assets were cleaned up, if governments improved their fiscal positions and if more clarity were provided on global financial regulation.

"The global financial system is still in a period of significant uncertainty and remains the Achilles' heel of the economic recovery," the IMF said in its semi-annual Global Financial Stability Report.

"The recent turmoil in sovereign debt markets in Europe highlighted increased vulnerabilities of bank and sovereign balance sheets arising from the crisis," the fund said.

Jose Vinals, director of the IMF's Monetary and Capital Markets Department, said recent volatility in currency markets was not a major concern for global financial stability as long as the changes "move in the direction of medium-term fundamentals.

"The best way of protecting against any unintended consequences of foreign exchange rate changes on financial balance sheets is to have sound buffers to accommodate whatever changes happen," he added.

The IMF said it trimmed its estimate of total global bank write-downs related to the financial crisis between 2007 and 2010 to $2.2 trillion from its April estimate of $2.3 trillion, largely on a drop in securities losses. Banks have recognized more than three-quarters of these write-offs, leaving about $550 billion still to be taken.

However, the fund said banks had made less progress in dealing with near-term funding pressures -- nearly $4 trillion of bank debt needs to be refinanced in the next 24 months. (more)
at 12:11 AM No comments: Links to this post 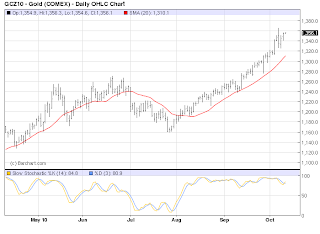 In one of several very interesting panel discussions at the World Gold Investment Congress section of Terrapinn's World Commodities Week in London this past week, James Turk reiterated his opinion that gold could climb as high as $8,000 - based on simple mathematics. In the 1970s, he pointed out, gold rose from $35 to $800 at its peak and he sees no reason why in the current period history shouldn't repeat itself by taking it from around $350, as it was in 2003, to around $8,000 by perhaps 2013-2015 in the current bull run, which many observers feel is only in its mid-stages.

However, investors who follow this advice also need to be aware that when the spike to over $800 came in early 1980 it came very quickly, and then the price receded back to around $490 very fast too - a far more volatile reaction than many would find comfortable to live with. Subsequently gold rallied again to around the $700 level before collapsing into a bear market from which it did not really emerge until the early 2000s. There are certainly those out there who believe that a similar fate may be in store for current gold investors - the difficulty would be picking the top when it eventually comes, as it surely will. Gold is unlikely to go on up for ever.

Turk is obviously, and probably always has been, one of the most bullish proponents of the gold story and his opinions have been strongly borne out so far in the latest runup in gold price. He also believes that the U.S., and by association much of the rest of the old major economic bloc, is on the road to hyperinflation - a gloomy premise for the world's middle classes who, in the past, have been virtually wiped out economically in countries where hyperinflation has occurred. He sees this as the ultimate consequence of the virtually indiscriminate printing of paper money, under the politico-speak of Quantitative Easing and sees holding physical gold and silver as one of the few options for protecting one's wealth against the perils of the massive inflation being predicted. (more)


DOW JONES NO LOSS TRADE. LEARN HOW, CLICK HERE.
at 12:07 AM No comments: Links to this post

US Economic Calendar For the Week