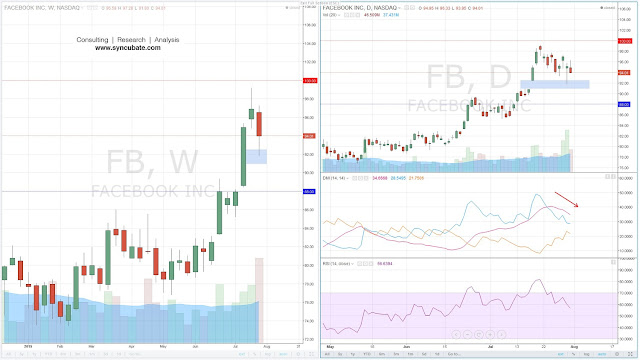 On the daily chart, +DMI is still above -DMI, so the bulls are in control over this timeframe. However, the ADX line is no longer rising and is now trending lower, which suggests that a range bound trading environment may be at play in the short to intermediate term.

There is a gap zone between the $91 and $92.50 price levels in which the stock has not traded for the most part. I would not be surprised to see this gap tested, especially if the bears continue to apply selling pressure and -DMI rises. The decline in the RSI signal suggests that bullish momentum may also be waning.

Considering the fact that $FB has risen for six weeks in a row prior to last week, consolidation above the $88-$90 support zone is to be expected in the coming month. The $100 level remains as the key resistance point to watch, assuming the bulls can regroup and push for a retest of it.
at 12:03 AM No comments:

The Chart of the Day belongs to Eagle Pharmaceutical (EGRX).  I found the pharmaceutical stock by using Barchart to sort the All Time High list for the stock with the highest Weighted Alpha then used the Flipchart feature to review the charts.  Since the Trend Spotter signaled another buy on 7/10 the stock gained another 12.66%. 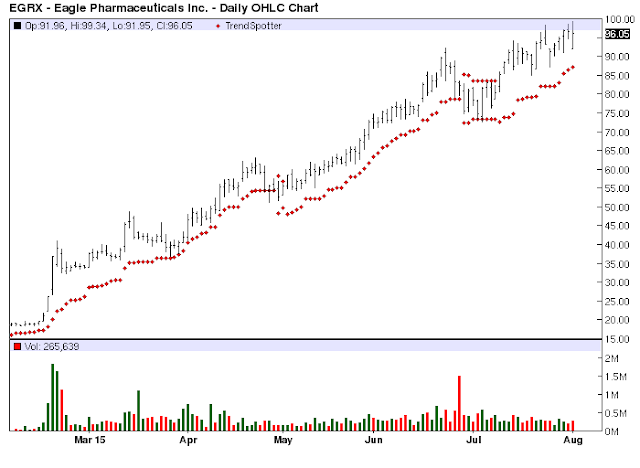 Fundamental factors:
at 12:03 AM No comments: 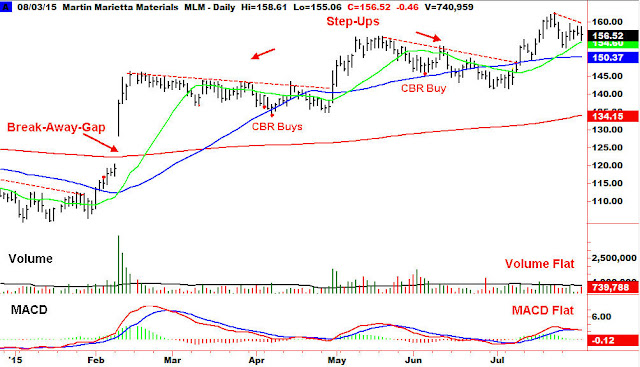 Martin Marietta Materials, Inc. (MLM) — This company is the second largest producer of construction aggregates in the United States. It receives about half of aggregates revenue from public works and infrastructure, a more stable source of revenue than commercial construction.
Capital IQ notes federal highway spending is expected to remain steady, but growth should come from increased state-level infrastructure and higher demand in the housing market. Its analysts also expect the July 2014 acquisition of Texas Industries to contribute to sales.
They project revenue will grow 28% in 2015 and another 12% in 2016. In May, they increased their earnings forecast, upping 2015 estimated EPS by $0.14 to $5.26 and 2016 by $0.43 to $7.47.  (more)
at 12:03 AM No comments: 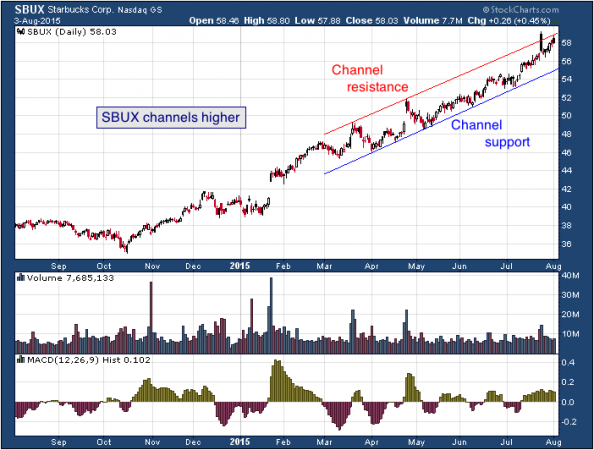 SBUX has formed a relatively clear up-channel chart pattern over the last 5 months. A channel is simply formed through the combination of a trend line support that runs parallel to a trend line resistance. When it comes to channels, remember that any (3) points can start the channel, but a 4th point or more confirms it. You can see that SBUX has several points of channel resistance (red) and support (blue).

The Tale of the Tape: SBUX has formed an up-channel. A long trade could be entered on a pullback down to the channel support, which is currently approaching $56. Short opportunities would be on rallies up to channel resistance, which the stock just hit, or on a break of channel support.
at 12:03 AM No comments: