Yahoo is in an uptrend with strong share accumulation. It continues to form bullish price patterns and points to higher prices in the coming week.

This is a weekly chart so things move much slower. But overall the pattern on BBRY is very bullish and if the broad market does not start a correction this stock price should test $30 per share this summer.

Apple topped out months ago but is now starting to look ready for a bounce. It is forming a possible stage 1 base, and an inverse head & Shoulders pattern. Both point to higher prices and a gap window fill which is the next higher volume resistance zone.

While I like the potential of individual stocks you are subject to individual news etc the more conservative trader can focus on a basket of technology stocks using the XLK ETF which shows higher prices in the next week or two also.
Another way to play this is through options which is technically the least risky trading strategy there is when done correctly.

In short, I like how the technology sector is looking for a continued move higher. Keep in mind the intermediate cycle is topping out for the SP500 soon. Stocks may just reach their recent highs then roll over in a big way. So any gains should be protected with partial profit taking and a protective stop.
Please share this article
at 12:05 AM No comments: Links to this post

In a fascinating reaffirmation of the fundamentals of the gold bull market, US Banks & Large Traders as defined by the CFTC as being, “commercially engaged in business activities hedged by use of the futures or option markets,” have quietly flipped from being tremendously short gold in late 2012, to now being tremendously long.
Furthermore, the speed of this change in positioning has occurred at the fastest rate since the data set began in mid-2000.
As shown below, on a month over month basis, US Bank & Large Trader long positioning has increased dramatically, with short positions being covered at the greatest rate of speed ever recorded:

(click to enlarge)
Additionally, when looking at this trend from a “total-position” perspective, we see an even greater accumulated move being made on both the long and short sides. Short positioning by US Banks & Large Traders has been collapsing since the beginning of 2013, while long positions are being steadily accumulated:

(click to enlarge)
In discussing this data with the world’s top gold chartist, Nick Laird, he noted that, “There’s been a marked swing in positions…As the speculators have decreased their longs and increased their shorts, the Market Makers have decreased their shorts and increased their longs…[however] I wonder if it’s not that their positions as Market Makers have changed (ie. every time a speculator goes short, a Market Maker as the supplier of the contract buys a long to hedge its positions)…
[But] considering who the sharks in the water are (JPM), I can well suppose the positions [are] being set up to rip off the speculators again.”
He further commented that, I don’t know how long and [how big] this buildup [will] become, but it’s like everyone’s rushing from one side of the boat to the other…[and] it’s building into a most bullish position. It creates violent reactions. So yes, we could well be seeing a massive short squeeze soon.”
—
Bottom Line: While the mainstream financial media continues its attack on gold, US Banks & Large Traders are now joining the world’s top hedge funds in being shockingly long gold—and they are making that move incredibly quickly.
This is another small (yet very significant) sign that the gold market is quietly changing its character.Please share this article
at 12:05 AM No comments: Links to this post

Ensco plc provides offshore contract drilling services to the oil and gas industry worldwide. The company operates through three segments: Floaters, Jackups, and Other. The company owns and operates an offshore drilling rig fleet of approximately 74 rigs, including 9 drill ships, 13 dynamically positioned semisubmersible rigs, 6 moored semisubmersible rigs, and 46 jackup rigs. Its drilling rigs are located in Brazil, Europe, Mediterranean region, the Middle East and Africa region, and the Asia Pacific rim region, as well as in the North and South America regions. The company also offers management services on rigs owned by third-parties. It serves government-owned and independent oil and gas companies, as well as independent operators. Ensco plc was founded in 1975 and is based in London, the United Kingdom.
Please take a look at the 1-year chart of ESV (Enso, Plc.) below with my added notations: 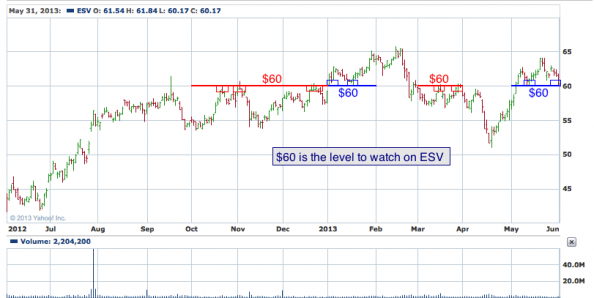 With exception to a few moves here and there, ESV has traded mostly sideways since August of last year. During that period of time, you will notice that the stock commonly reacts to the $60 price. That price has been resistance (red) on multiple occasions and back in January it also acted as support (blue), just as it has a couple of times here recently.
The Tale of the Tape: ESV tends to react to $60. A trader could enter a long position at $60 with a stop placed under the level. If the stock were to break below that support a short position would be recommended instead.
Please share this article
at 12:04 AM No comments: Links to this post

The One Stock I'd Pick to Play the Precious Metals Rebound: SWC 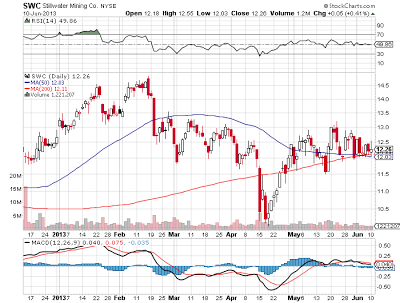 Ford Motor Co. (NYSE: F) recently announced that May was the best month for its truck sales in six years. Truck sales offer some insight into the state of the economy. Increased truck sales confirm higher consumer confidence. Trucks are gas guzzlers, and many consumers will only buy them and other large vehicles if they are confident they can afford the gasoline.

Auto sales are also growing with manufacturers reporting that new-vehicle sales are up 8.2% compared to a year ago. Analysts expect sales to reach 15.3 million this year, up from less than 14 million in 2012, and up over 50% since the recession lowered annual sales to about 10 million.

Auto stocks are one way to trade this news, but I think their suppliers can be better trades. Platinum and palladium are used in catalytic convertors and could increase in value along with the demand for cars and trucks. (more)