Over the last 6 months GGAL has created a key level of support at $12 (red) and that $12 level was also the “neckline” support for the stock’s head and shoulders (H&S) reversal pattern. Above the neckline you will notice the H&S pattern itself (blue).
Remember, patterns such as an H&S need to confirm to have the meaning that they imply. Confirmation of the H&S occurred when GGAL broke below its $12 support.

The Tale of the Tape: GGAL has confirmed a head & shoulders pattern. A short trade could be entered anywhere near $12 with a stop placed above that level. A break back above $12 could negate the forecast for a move lower, thus a long position could be considered instead.
Please share this article
at 12:04 AM No comments: Links to this post

iBio (IBIO): Our Last Line of Defense Against Ebola?

On October 9, U-T San Diego reported that Mapp Biopharmaceutical enlisted a company to help produce the Ebola drug cocktail, ZMapp.
And widespread speculation was that iBio (IBIO) would be identified as Mapp’s partner.
As a result, iBio’s shares spiked more than 66.6% on Columbus Day.
The Delaware-based biotech company closed the trading day at $2.45, an increase of more than $0.98 from Friday’s closing price of $1.47.
More than 49 million shares changed hands, compared to the three-month average of just over 600,000.
This proves without a doubt that hysteria about Ebola has reached Wall Street.


Don’t Get Caught in This Terror Trap

I’m sure you’ve heard by now that a nurse in Dallas was diagnosed with the Ebola virus after having extensive contact with a patient who later died of the deadly virus.
The news significantly deepened concerns about an Ebola outbreak thas have plagued the United States since late September.
As you can see from the chart below, iBio shares have blasted higher on both Friday and Monday.

Now, you might be asking what role in the fight against Ebola iBio plays…(more)
Please share this article
at 12:04 AM No comments: Links to this post 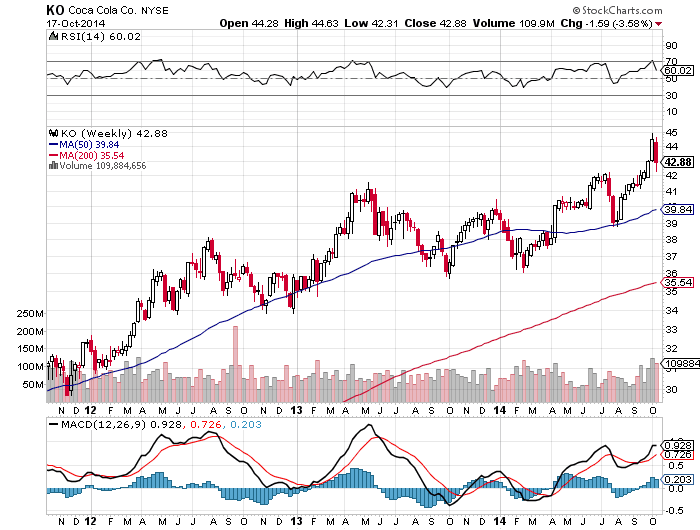 When it comes to stock-picking, there are few investors who have been as successful as legendary investor Warren Buffett.
Many investors have had the bright idea to try and emulate his success by simply adding the same stocks to their portfolio, although they are coming late to the party in most cases.
Warren Buffett certainly likes dividends, but that’s not the primary reason he makes an investment. (more)

Express, Inc. operates as a specialty apparel and accessory retailer primarily in the United States. Its stores provide apparel and accessories for women and men between 20 and 30 years old across various aspects of the lifestyles comprising work, casual, jeanswear, and going-out occasions. As of August 27, 2014, it operated approximately 630 retail stores located primarily in shopping malls, lifestyle centers, and street locations in the United States, Canada, the District of Columbia, and Puerto Rico. Express, Inc. also distributes its products through the company’s e-commerce Website, express.com, as well as franchisees Express stores in Latin America and the Middle East.
Take a look at the 1-year chart of Express (NYSE: EXPR) with the added notations: 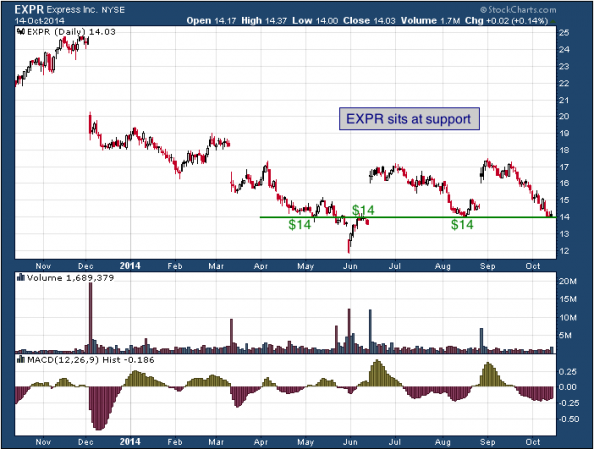 After declining into May, EXPR has traded in a large sideways range. During the May to October timeframe, the stock has also created a key level at $14 (green). You can see how that level has been both a prior resistance and a prior support. Now, the stock has approached $14 again and that could provide another bounce higher.

The Tale of the Tape: EXPR has a key level of support at $14. A trader could enter a long position at $14 with a stop placed under the level. If the stock were to break below the support a short position could be entered instead.
Please share this article
at 12:02 AM No comments: Links to this post