Matador Resources Company engages in the exploration, development, production, and acquisition of oil and natural gas resources in the United States. The company primarily holds interests in the Eagle Ford shale play in South Texas; the Haynesville shale play, including the Middle Bossier shale play, as well as the Cotton Valley and Hosston formations in Northwest Louisiana and East Texas; the Wolfcamp and Bone Spring plays in Southeast New Mexico and West Texas; and the Meade Peak shale play in Southwest Wyoming and the adjacent areas of Utah and Idaho. As of December 31, 2012, its estimated total proved reserves were 23.8 million barrels of oil equivalent, including 10.5 million Bbl of oil and 80.0 billion cubic feet of natural gas.
Please take a look at the 1-year chart of MTDR (Matador Resources Company) below with my added notations: 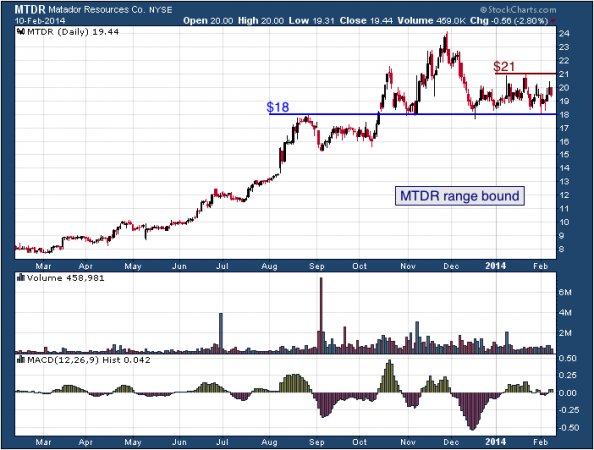 MTDR had an amazing run from its low of $8 to its November peak at $24. Over the last 6 months the stock has created a key level of $18 (blue) that has been both support and prior resistance. In addition, the stock has been stalling at roughly the $21 area. At some point soon the stock will have to break one of those two levels.

The Tale of the Tape: MTDR has a key level of support at $18 and a $21 resistance. A long trade could be made at $18, or on a break through $21, with a stop placed below the level of entry. However, if the stock were to break below $18 traders might want to look to get short on the stock.
Please share this article
at 12:05 AM No comments: Links to this post

There is an interesting pattern taking shape in the Solar Stocks. More specifically, the Guggenheim Solar ETF $TAN is breaking out of what could be an inverse head & shoulders continuation pattern. I first brought up the possibility of this breakout on Saturday in a post showing some of the highlights from a long charting session.
This one is pretty standard: In October, the Solar exchange traded fund ran into resistance in the low 40s. After a brief correction, prices rallied right back up there in November and rolled over once again. This time TAN made lower lows into December. After one more rally and retest of this resistance, prices once again rolled over. As always, the more times that a level is tested, the higher the likelihood that it breaks. Sure enough, Tuesday morning Solar stocks broke out to new highs, finally clearing all of that supply (resistance): 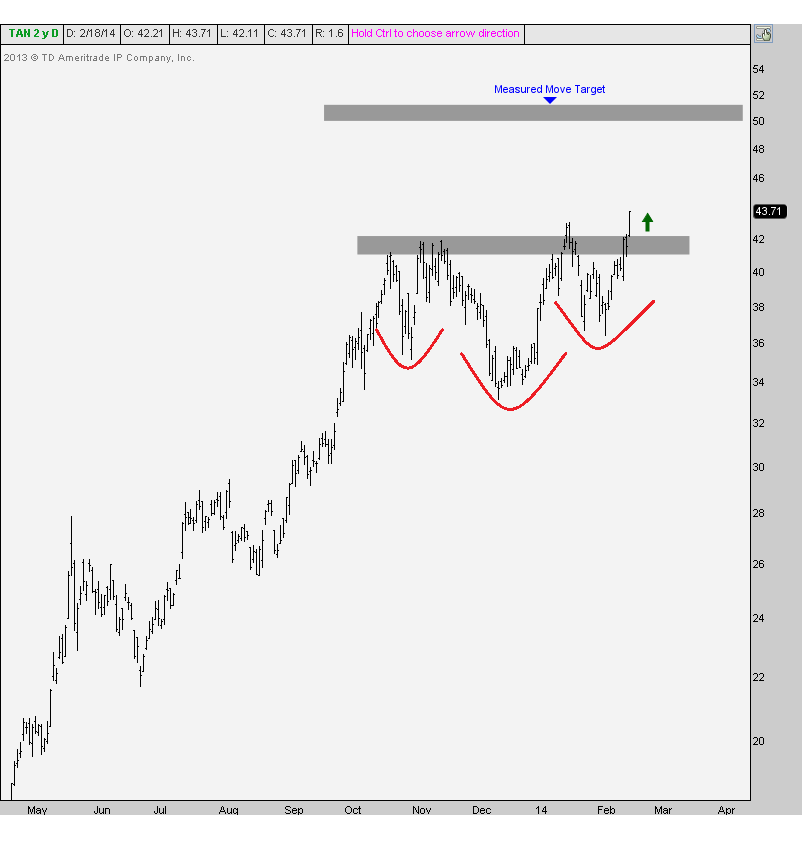 As long as prices hold this breakout, prices should be heading a lot higher. The measured move based on the size of this pattern takes us above $50. This target is based on the 9 points between the bottom of the head and neckline.  (more)
Please share this article
at 12:04 AM No comments: Links to this post

Zinc Is Ready for a Breakout

Since the 2008 financial crisis, zinc prices had remained relatively quiet. Meanwhile, copper and gold have since managed to set new highs.

Then last fall things started to change, with zinc prices seeing some impressive action. Zinc shot up from $0.84/lb. to $0.96/lb. from mid-November to early December.

We've seen a small pullback and bounce since then, but there are increasing signs that this trend is just getting started.  (more)

Gilead Sciences (NASDAQ: GILD) Uptrend is Almost Scary, but It's Not Over Yet 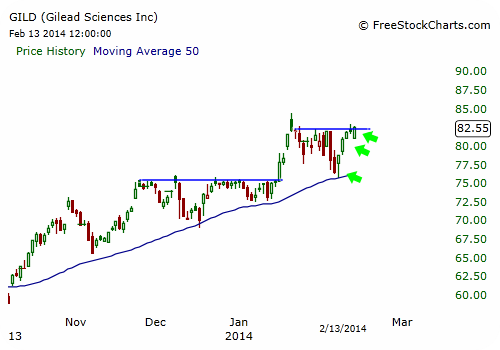 Gilead Sciences (NASDAQ: GILD) is a closely followed stock in the biotechnology industry. It is currently the top holding in the iShares Nasdaq Biotechnology ETF (NASDAQ: IBB), comprising 7.83% of the ETF's assets.
On Thursday, IBB closed at a fresh all-time high, making three new closing highs three days in a row. With such great momentum behind the sector ETF, GILD looks poised to break past its near-term layer of resistance and participate in this rally in a more meaningful way.
On Feb. 4, Gilead Sciences reported fourth-quarter earnings that beat handsomely on both the top and bottom line. The company saw earnings of $0.55 per share versus an estimated $0.50, a 10% increase from the year-ago quarter. Q4 revenue was 20% higher on a year-over-year basis at $3.12 billion versus an estimated $2.85 billion.  (more)

So What About Silver? blog.milesfranklin.com / By Bill Holter / February 18th, 2014
I wrote a piece yesterday showing you how the moving averages for both the HUI and gold look to be bottoming and crossing over from very oversold levels.  I got to thinking, what about silver?  I figured in the back of my mind that because silver has underperformed gold and has generally seemed to only “bottom bounce” more that its progress was behind that of gold.
I again tapped my buddy Dan Norcini and asked him what silver looked like?  This is what he sent me!
Silver is exactly where it should be given that historically the shares lead, followed by silver and then gold.  Silver’s MACD’s are not “touching” yet but they are VERY close, much closer than gold’s to crossing over.  I do want to point out that we have “round tripped” back to the $18-$20 levels that was seen in previous years as resistance.  We basically hit this resistance level 3 times prior to the 2011 run up.  Once broken out however, silver ran to $30 in 6 or 7 months.
READ MORE
Please share this article
at 12:03 AM No comments: Links to this post 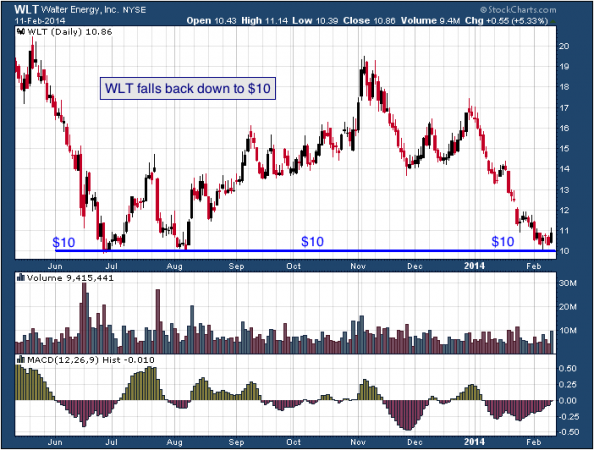 WLT found support at $10 (blue) twice back in June and August. The stock then managed to rally up to a high of almost $20. Now the stock has approached $10 again and that might provide another bounce higher. However, the stock’s recent lagging of the overall market could be setting the stock up for a breakdown.

The Tale of the Tape: WLT has a key level of support at $10. A trader could enter a long position at $10 with a stop placed under the level. If the stock were to break below the support, a short position would be recommended instead.
Please share this article
at 12:03 AM No comments: Links to this post