Himax Technologies, Inc. (NASDAQ:HIMX) looks to have bottomed technically. The stock is beginning to make a move higher and looks like it is gonna squeeze some shorts here. The MACD has just flashed a buy signal recently and RSI is also gaining strength. With a combination of good earnings, an Outperform rating from Baird and a high volume, I think we could see a nice bounce over the next few days.
at 12:03 AM No comments: Links to this post

Medtronic plc manufactures and sells device-based medical therapies worldwide. It serves hospitals, physicians, clinicians, and patients. Medtronic plc was founded in 1949 and is headquartered in Dublin, Ireland.
Take a look at the 1-year chart of Medtronic (NYSE: MDT) below with added notations: 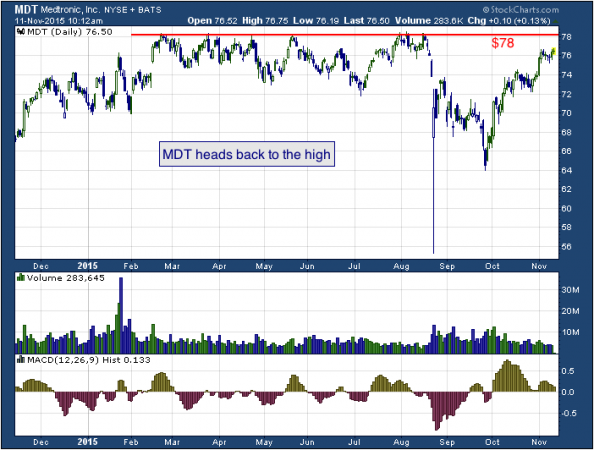 Overall, MDT has been trading sideways throughout the majority of 2015. With the exception of the August-September dip, the stock is right where it’s been most of the year. In addition, many times during the year MDT has hit the same resistance at around $78 (red), and it looks like the stock is headed back up to that level again now. A solid close above the $78 should lead to a significant leg higher for MDT.

The Tale of the Tape: MDT has a 52-week resistance at $78. The possible long position on the stock would be on a breakout above that level with a stop placed under it.
at 12:03 AM No comments: Links to this post