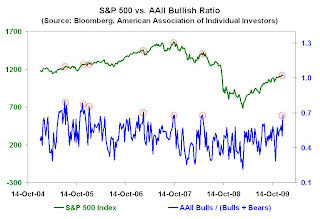 Who said the small investor isn’t optimistic about stocks?

If you take this together with the fact that the Investors Intelligence (II) Bull/Bear Ratio has also hit its 2007 peak (see Bullishness at Record Levels), some might say that bullish sentiment has reached a contrarian extreme. 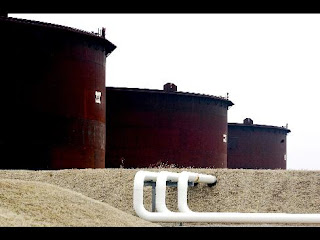 Raw materials may return more than financial assets for the first time in three years as the global economy rebounds, according to Bloomberg surveys and 2009’s most accurate commodity forecasters.

Oil, corn, gold and palladium will advance as much as 17 percent this year, the analysts said. The S&P GSCI Enhanced Total Return Index of 24 commodities will gain 17.5 percent, Goldman Sachs Group Inc. estimates. That’ll beat the 11 percent jump in the Standard & Poor’s 500 Index and the 2.8 percent return on the benchmark U.S. 10-year note, forecasts compiled by Bloomberg show.

“Demand is growing on a global basis,” said Peter Sorrentino, who helps manage $13.8 billion at Huntington Asset Advisors in Cincinnati and predicted the collapse in prices in 2008. “Commodities are a great place to be to gain exposure to the growth that’s coming out of emerging markets.” Sorrentino’s largest commodity holdings are in coal and natural gas. (more)

The greenback dropped to a 14-month low in November, but has since bounced back amid signs of economic recovery in the United States and anticipation of an interest rate hike by the Federal Reserve.

Woolfolk told Bloomberg the dollar may rise for another couple weeks, thanks to seasonal factors.

Then comes the decline

“The bad news is that until the Fed begins its process of normalizing interest rates, there are just too many factors weighing against the dollar for it to have any hope of a cyclical rebound.” (more)
at 3:12 AM No comments:

Speaking at American Economic Association's mammoth yearly gathering, experts from a range of political leanings were in surprising agreement when it came to the chances for a robust and sustained expansion:

Many predicted U.S. gross domestic product would expand less than 2 percent per year over the next 10 years. That stands in sharp contrast to the immediate aftermath of other steep economic downturns, which have usually elicited a growth surge in their wake.

"It will be difficult to have a robust recovery while housing and commercial real estate are depressed," said Martin Feldstein, a Harvard University professor and former head of the National Bureau of Economic Research.

Housing was at the heart of the nation's worst recession since the 1930s, with median home values falling over 30 percent from their 2005 peaks, and even more sharply in heavily affected states like California and Nevada. (more)

Bond-fund flows at an all-time peak 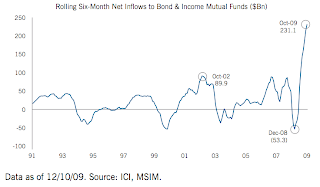 Living on Nothing but Food Stamps 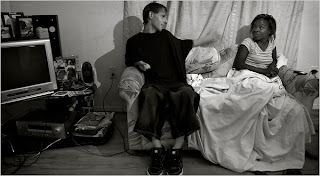 After an improbable rise from the Bronx projects to a job selling Gulf Coast homes, Isabel Bermudez lost it all to an epic housing bust — the six-figure income, the house with the pool and the investment property.

Now, as she papers the county with résumés and girds herself for rejection, she is supporting two daughters on an income that inspires a double take: zero dollars in monthly cash and a few hundred dollars in food stamps.

With food-stamp use at a record high and surging by the day, Ms. Bermudez belongs to an overlooked subgroup that is growing especially fast: recipients with no cash income.

About six million Americans receiving food stamps report they have no other income, according to an analysis of state data collected by The New York Times. In declarations that states verify and the federal government audits, they described themselves as unemployed and receiving no cash aid — no welfare, no unemployment insurance, and no pensions, child support or disability pay. (more)

Your request is being processed... PPIP: Banks 'Making A Killing' On Government Toxic Asset Program

Remember the Public-Private Investment Program (PPIP)? The Treasury Department unveiled the program in March and intended it as a way to help banks unload hard-to-sell (read: often toxic) mortgage securities. In short, private investors partnered with the government to get bad loans off the banks' books -- and everyone, including taxpayers, was supposed to come out ahead on the proceeds of the asset sales.

But, as Bloomberg reports this morning, some of the nation's largest banks have actually bought more risky home loans instead of getting them off their balance sheets.

In other words, the program that was supposed to help banks dispose of these toxic assets instead made those assets so marketable that banks bought more -- which has pushed Wall Street's titans to even greater exposure to the stalled housing market. The banks apparently decided that the government's entry into the mortgage security market was simply a guaranteed money-making opportunity. (more)

Accounts behind 180 days or more, and unlikely ever to be paid, rose to 0.91 percent in November from 0.87 percent in October, according to PayNet, which provides risk-management tools to the commercial lending industry.

It was the 22nd consecutive monthly increase in loans so far in arrears they ultimately may have to be written off by lenders.

Accounts in moderate delinquency, or those behind by 30 days or more, rose in November to 4.33 percent from 4.19 percent in October, according to PayNet.

Clearly, the "turnaround" in the economy has simply been a government induced recovery of its favored sectors, autos, investment banks etc. Small and medium-sized businesses are being squeezed by the distortional method the US government is using to direct money flows. (more)
at 3:02 AM 2 comments:

USA Will Not Repay $1 Trillion Debt To China