U.K. house prices fell for a fifth month in November as demand for property dropped the most in almost two years, Hometrack Ltd. said.

The average cost of a home fell 0.8 percent from October to 155,000 pounds ($242,900), the London-based property researcher said in an e-mailed statement today. Demand for homes, measured by the change in new buyers registering with real-estate agents, fell 4.3 percent, the biggest decline since January 2009.

The report adds to evidence of a weakening property market after Rightmove Plc said on Nov. 15 that home sellers cut asking prices by the most since 2007 this month and U.K. banks approved the smallest number of mortgage since 2009 in October. The government has announced the biggest budget squeeze since World War II and officials have warned the cuts may harm the recovery.

“Concerns over the economic outlook on the back of recent spending cuts, together with widespread expectations that house prices are set for a period of retrenchment, are driving the continued weakness in demand,” Richard Donnell, Hometrack’s director of research, said in the statement. “In the near term we expect demand to remain weak and this will continue to put downward pressure on prices.” (more)

Excellent video interview with David Rosenberg, Gluskin Sheff’s Chief Economist. David Rosenberg shares his economic and market outlook with Consuelo Mack of Wealthtrack, plus advice on how to invest in it.
at 12:17 AM No comments: 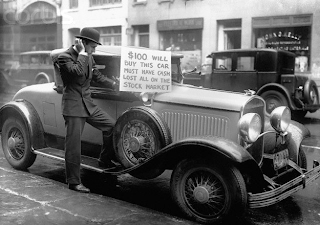 With the stock market showing weakness and gold still consolidating gains, earlier in the week, the Godfather of newsletter writers Richard Russell stated, “Yesterday the Dow declined. If this market decline continues, it's going to catch a lot of bullish economists and bullish stock-holders shocked, and on the wrong side of the fence. From the Russell perspective, the stock market is duplicating where it was in April of 1930. The market is telling us that despite the rosy expectation, hard times lie ahead.”

“Ironically, just as the stock market was ready to fall, the North-South Korea altercation hit the news wires. This gave the public "a clear and obvious reason" for the market to fall. But the forces behind the fall were more serious than the Korean fight. The stock market was looking ahead; and it was discounting an ominous future.

What I think we are seeing is the early break-up of the huge market top, the top that began forming in February of 2010. This is probably the biggest top I have seen in more than half a century of dealing with markets.

Over the past year, I've done my best to get my subscribes out of common stocks. I've asked (begged, beseeched, scolded, insisted, demanded) that my subscribers be out of common stocks (all except precious metal mining issues). I want my subscribers to be in precious metal items along with some cash -- cash will be handy and serviceable as long as it is accepted. We pay our rent, our restaurant bills and our taxes with cash. And we buy gold with cash. (more)
at 12:16 AM No comments:

Following Hungary And Ireland, France Is Next To Seize Pension Funds

If the recent Hungarian "appropriation" of pension funds, and today's laughable Irish bailout courtesy of domestic pension funds sourcing 20% of the "new" money was not enough to convince the world just how bankrupt the entire European experiment has become, enter France. Financial News explains how France has "seized" €36 billion worth of pension assets: "Asset managers will have the chance to get billions of euros in mandates in the next few months for the €36bn Fonds de Réserve pour les Retraites (FRR), the French reserve pension fund, after the French parliament last week passed a law to use its assets to pay off the debts of France’s welfare system. The assets have been transferred into the state’s social debt sinking fund Cades. The FRR will continue to control the assets, but as a third-party manager on behalf of Cades." FN condemns the action as follows: "The move reflects a willingness by governments to use long-term assets to fill short-term deficits, including Ireland’s announcement last week that it would use the country’s €24bn National Pensions Reserve Fund “to support the exchequer’s funding programme” and Hungary’s bid to claw $15bn of private pension funds back to the state system." In other words, with the ECB still unwilling to go into full fiat printing overdrive mode, insolvent governments, France most certainly included, are resorting to whatever piggybanks they can find. Hopefully this is not a harbinger of what Tim Geithner plans to do with the trillions in various 401(k) funds on this side of the Atlantic.

More from FN on how first France, and soon every other socalized pension regime, will continue to plunder a nation's life saving to fund short-term deficits: (more)

"Go to the mattresses," from the movie "The Godfather," describes a war mode, and the S&P is in just that kind of mode. Less important is describing the two factions, natural market forces, and the well documented Federal Reserve manipulation through Permanent Open Market Operations, aka POMO.
Ultimately, market forces will prevail, even when temporarily distorted through intervention. Unfortunately, the impact is most often exacerbated when eventually resolved.

Rather than attempt to divine the meddling of the Fed, it is always best to stick to what the market says.
It may not always be clear, but the market never lies. Even when the picture from the charts is equally unclear, we go back to basics. Start with the higher times frames and work lower.

The two horizontal lines on the monthly chart show a band of resistance between 1253 on the upper line to 1221.25 on the lower line. To the weekly... (more)

3 Stocks That Should Rally Nicely in the Next Year 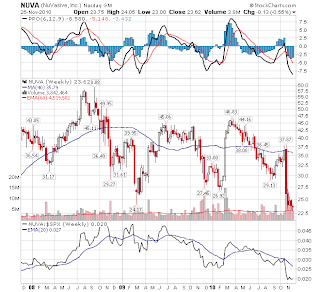 The S&P 500 is back near where it was a month ago. A surge into November has been met by recent profit-taking as we head into the Thanksgiving holidays. In pullbacks like these, I like to scan the lists of losing stocks to see if any bargains get uncovered. I found three, all of which hit 52-week lows this week, and all of which are still solid long-term plays. The pullback in these names should set the stage for a much better 2011.

NuVasive (Nasdaq: NUVA)
I recommended this stock two weeks ago as part of a paired trade play against Intuitive Surgical (Nasdaq: ISRG).

Since then, Intuitive Surgical has fallen roughly -10% while NuVasive has barely moved. That's logical: in a tough trading environment, the short end of paired trades is likely to play out better than the long end. Even as Intuitive Surgical comes back down to earth, the real story here is NuVasive's eventual upward move. It won't come quickly -- few near-term positive catalysts exist -- but as 2011 unfolds, investors are likely to see that NuVasive's recent quarterly missteps are more of a function of an unsettled health care environment than any company-specific troubles.

As the dust settles, the fact that NuVasive's technology leads to improved patient outcomes and lower total healthcare costs is likely to again be the focus of health care insurers -- and investors. Shares trade for less than 20 times next year's earnings for the first time in the company's history (going back to 2004). A forward multiple closer to 30 still seems justified in the context of long-term growth -- that means +50% upside in 2011. (more)

Cool Products and Services You Can Get for Free

From entertainment and financial advice to health care and technology.

The battered economy has taken the stigma out of bargain-hunting. Some might even say that saving a few bucks is in style.

We're not talking about buying nine cups of coffee and getting the 10th free--we're talking about free entertainment, financial advice, health care, technology and more.

Look hard enough and you can find a bevy of 100% discounts, especially online. "Facebook is a great source of freebies right now, as so many brands try to attract fans and establish themselves," says Julia Scott, who runs the popular blog BargainBabe.com.

We went freebie fishing and filled the net. Read on for a sampling.

A word of warning, adds Scott: "There are probably more scams out there than there are legit offers, so it is important to be careful." Her advice: When you see a deal that looks too good to be true, always look for customer service e-mail, telephone number and a promised delivery date. Also look for eligibility requirements (by age or residence) or other exclusions; their absence lends a whiff of impropriety.

Among the legitimate goods you can get gratis: (more)
at 12:07 AM No comments: