How Marc Faber Prepares For “When The Shit Hits The Fan”

During a recent round-table discussion (accessible below), Marc Faber explained his asset allocation strategy and his incredulity at what the Fed is doing.


“I have around 25% in gold… and it’s my insurance policy. It is important that one day when the so-called shit hits the fan – and I think the Fed is well on its way to creating that situation – you have access to your gold, that it is not taken away.”


Faber goes on to discuss his lack of surprise at the Fed’s un-Taper, the wealth in-equality impacts, and Asia’s growing lack of faith in the USD.
Read More @ ZeroHedge.com 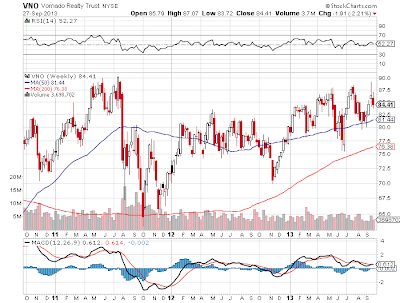 Unless you own a home in each of America’s 20 biggest cities — or you’re an economist — a 12.4% increase in the S&P/Case-Shiller Index doesn’t mean much.
You can’t make money from a nationwide statistic. Not in real estate…
Cleveland, for example, may have seen a 3.4% increase from July 2012 to July 2013. But that’s nothing compared to Los Angeles, where prices jumped 20.8%.
Or San Francisco, which posted a 24% year-over-year increase. Las Vegas prices jumped even higher, up more than 27%.
And then there’s New York, where you can make a killing on some prime Manhattan real estate right now…
There’s a hassle-free way to do it, too. So you’ll never have to worry about tenants, taxes, insurance, maintenance… You won’t need a million-dollar down payment, either. (more)

Bill Barrett Corporation, an independent oil and gas company, engages in the exploration, development, and production of crude oil and natural gas in the United States. It principally holds interests in various properties located in the Piceance, Uinta, and Denver-Julesburg basins in the Rocky Mountain region of the United States. The company was founded in 2002 and is headquartered in Denver, Colorado.
To review Barrett's stock, please take a look at the 1-year chart of BBG (Bill Barrett Corporation) below with my added notations: 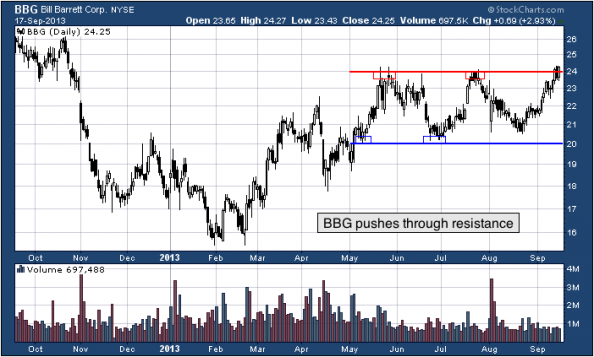 BBG had been trading in a sideways range for the last 4-5 months. During that period of time the stock had also been bouncing within a common chart pattern known as a rectangle. Rectangle patterns form when a stock bounces between a horizontal support and resistance. A minimum of (2) successful tests of the support and (2) successful tests of the resistance will give you the pattern. BBG's rectangle pattern had formed a $24 resistance (red) and a $20 support (blue). Now that the stock has broken its rectangle resistance higher prices should follow.
* One caveat: Traders would have liked to have seen an increase in volume on the break above $24. Volume would add validity, but that doesn't mean the stock isn't still going higher.
The Tale of the Tape: BBG has broken through the resistance of its rectangle pattern. The possible long position on the stock would be on a pullback to $24. The ideal short opportunity would be on a break back below $24.
Please share this article
at 12:04 AM No comments: Links to this post

Rent vs. Buy: Why Buying a House Generally Wins 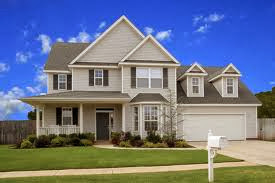 Rent vs. buy. In finance circles, it's a bigger debate than "paper vs. plastic" or "tastes great vs. less filling."
It remains a debate fought by smart people on both sides, because the variables make calculus look like third-grade math.
Advocates of buying will use arguments that feature phrases such as "throwing away money on rent," "mortgage interest rate deduction," and "forced savings." They may even appeal to your sense of community by pointing out the social benefits of an ownership mentality.
Advocates of renting will say the benefits of homeownership are overrated while the costs are underrated.
From the title of this column, you know where I stand. But let's give the rent advocates their due.  (more)