Where is Support for Precious Metals Markets? 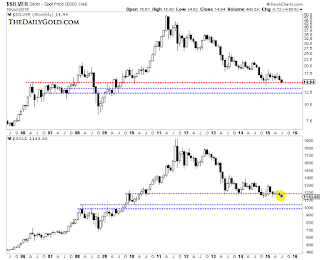 by Jordan Roy-Byrne, CMT
The Daily Gold
The gold miners have broken below their 2008 to 2014 support while Silver is essentially trading at a six year low. Gold looks set to make a new monthly low and weekly low but has yet to break its daily low at $1140/oz. Barring a sudden short squeeze Gold could be hours or days away from cracking in the way Silver and the miners have in recent weeks. The trend for the sector is obviously down and sentiment is following. However, the more important issue for long term bulls is where is the strong support for these markets.
The monthly candle charts of Silver and Gold are below. I’ll start with Silver. It is losing key support at $15/oz. The next key support levels are in the low $13s and low $12s. Moving to Gold, note that Gold appears to have lost $1180/oz which has been a key support level for two years. The monthly chart shows that the next strong support levels are $1040 and $1000.
Continue Reading at TheDailyGold.com…

Martin Armstrong returns to the program…
Socialism is not about helping people, it’s about government helping itself to your money. Unemployment rises while costs go up and prices are going up. So we have inflation and deflation taking place at the same time. An economic downturn is virtually assured. The Euro System is breaking down before our eyes. All the countries of the Euro are doing badly. The bondholders are being supported against the people. The result will be tragedy.

Biotechnology Stocks IBB Up 409% in Five Years… Time to Sell? 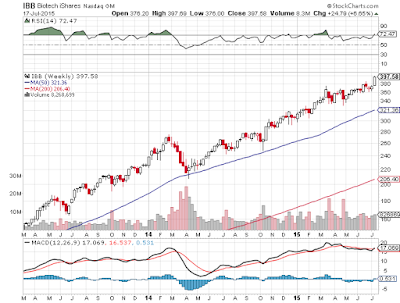 Biotech stocks are on fire…
The iShares Nasdaq Biotechnology (IBB) ETF just hit a new all-time high. It’s up 29% so far this year. The S&P 500 is up just 3%.
This is nothing new… biotech stocks have been killing it for years. IBB is up 59% in the last year… and an incredible 409% in the last five years. The S&P 500 is up just 99% in the last five years.
Biotech stocks are doing so well for good reason. Some biotech companies are doing amazing things. In a recent edition of Extraordinary Technology, Chris Wood explained how a new biotechnology called “CAR T cell therapy” can effectively fight certain forms of cancer. (more)

With the year halfway through, Morgan Stanley analysts have compiled their “Vintage Values” report collecting their 15 best stock bets for the next year.
“Put simply, these 15 ideas represent our analysts’ highest-conviction stock ideas for outperformance over the next 12 months,” the analysts said. “We sought ideas that offer the best combination of differentiated research, favorable risk-reward profiles, and clear catalysts.”
The picks consist of companies with market caps over $1 billion.
“We focused on anticipated events over the next year that our analysts expect will validate their investment theses, change investor perceptions, and drive the stock to our analysts’ Base (or Bull) case valuation scenario,” they added.
Last year’s “Vintage Values” outperformed the S&P 500 by 3.56%. (more)
at 12:03 AM No comments:

Exploration Insightsby Brent Cookwww.explorationinsights.com
June 19, 2015
The Rant
What was it like, Dad?
It was tough kid. We were just coming out of the most perfect spring. The fruit trees were all in blossom, streams filled with fish, deer abounded, and we were all feeling pretty right with the world—we owned it and were the chosen ones.
Then we headed out across the flats, believing the prophets that the next paradise, just over the horizon, was even better. But the horizon never came, the land turned to salt flats and dust; the temperature reached 110°, day after day after day. We burned and suffered. The roving bandits knew we were doomed and had no interest in what little we had left. Each promising oasis was a mirage and one by one we lost our way, numbed and staggering in all directions. We lost nearly everyone on that journey which began so optimistically—and naively.
It was brutal and devastating kid; I hope to never go through that again. But some of us did survive to carry on, and I’m here to tell you about it.

(Fig. 1: Almaden share price 1994 to 2015. Note at least three separate opportunities for substantial gains during this period. The chart has some problems, but you get the point.)
Virginia Mines (VIA) was another company I purchased on the way down. A $3.75 stock in 1996 was a “steal” at $1.50 in 1998. Virginia was Andre Gaumond: one of if not the best guys in the business, working in the best province in the world (Quebec), getting money back from the government, and fully funded for years. This was as good as an exploration investment gets.
Yet VIA continued to decline. I reluctantly added a bit later that year at $0.75-- I mean the guy had $0.45 a share in cash! At one point in 1999 the stock was selling for $0.35: a 22% discount to cash. The stock languished at under $1.00 until about 2002, eventually hitting $1.50 in late 2003 (Fig. 2).

(Fig. 2: Virginia Gold 1993 to 2006, when it was acquired by Goldcorp.)
After looking at the chart above you are probably expecting, since it’s my tale, that I stayed the trade to the end. I didn't. Seventy-five cents to $1.50 at that time was a big (and rather rare) win after years of pain. I took the profits and bought you some shoes, kid.
Then in 2004, Andre and his team exposed some gold mineralization in trenches at the Eleónore prospect in Quebec. Over the next two years successive drill campaigns showed Eleónore to be a very large, high-grade gold deposit. Goldcorp acquired the deposit for shares, in a deal that equated to ~$13 per VIA share. Goldcorp proceeded to double after the acquisition. VIA shareholders also received half a share for every VIA share in the Newco, Virginia Gold. Virginia Gold was recently acquired by Osisko Royalties (OR) for ~$14.50.
Bear in mind, all this could be had for a price that valued the original Virginia Mines at less than the cash in its treasury.
Sidebar: I re-acquired VIA in early 2004 after visiting the trenches at Eleónore (when I was contributing to Paul van Eeden’s letter). We held through the ensuing take-outs by Goldcorp and then Osisko: some face saved, and lots of money made.
Not to belabor a point on this walk down memory lane, but there were other examples of truly stupendous profits that were made on purchases during the ‘97-’02 bust, at a time when having teeth pulled seemed a more enjoyable choice than coughing up the dough for a junior exploration company story.
In late 1997 some young kid named Brian Dalton and his mates who had funded their way through university staking claims and renting trailers during the Voisey’s Bay land rush IPO’d their company at ~$0.25. From there Altius Minerals (ALS) traded as low as $0.18 and slowly climbed to $0.70 over the next four years. ALS was a bet on some frugal Newfies using other people’s money to explore for world-class deposits. The wait was worth it. They attracted Barrick into a search for Carlin gold deposits in Newfoundland, made a uranium discovery in Labrador (Aurora), nearly closed a deal on an oil refinery, and bought a few royalties along the way. The stock got as high as $30 in 2006 and now sits at about $14 (Fig. 3). Buying smart, honest people running companies with a tight share structure in a busted market is usually a good idea—if one has the patience.

(Fig. 3: ALS 1997 to 2015. Note the four years of absolute boredom as the company executed its business plan.)
First Quantum had built a small copper recovery operation in Zambia near a project I was involved with (ZCCM). Nice little operation, very smart people that we (mostly Rick Rule) financed at ~$0.75 in 1999 in a placement that included a full warrant. The company managed to lever its success into bigger and better African copper projects, hitting $4.50 in 2004 and $27 in 2011 (Fig. 4).

(Fig. 4: First Quantum, 1997 to 2015. Note the seven years of pain.)
I met Ewan Downie, President Wolfden Resources, at the 2002 PDAC. He was an unknown then, with few friends and fewer backers, yet it was clear he had some very good ideas on projects that he had picked up for nothing in the Canadian north. Rick and I financed him at $0.35 and were virtually alone in the deal. He subsequently made the High Lake copper discovery, taking the share price to $8 in 2005. It was eventually sold for $3.60 in 2006 and Premier Gold (PG) was spun out of it.
Nevsun Resources (NSU) was another highflyer from the ‘92 to ’97 boom; it fell from $16 to $0.10 (Fig. 5). Then in January 2003 it discovered the Bisha deposit in Eritrea, which took the share price from about $1 to over $8 (admittedly on some serious broker BS). Nonetheless, the company found a legitimate deposit that is now in production and making good money.

(Fig. 5: Nevsun 1995 to 2004. Nearly flat-lined for four years)
Did you see it coming Dad?
On the whole, no. There were certainly some people who understood the cyclical nature of the metals market, and that we couldn't continue producing copper, gold, etc., at below the cost of production (Ross Beaty, Frank Holmes, and Rick Rule come to mind). But honestly, in 2000 few if any saw the China miracle, emerging markets’ boom, 9/11, Bush, Greenspan, the Iraq debacle, the Taliban, etc., coming. No, the sector was dead and there were few of us left with any optimism or belief.
I don’t see the need to rehash the 2002 to 2010 commodities bull market in any detail—you lived it. Suffice to say the Internet and real estate bubbles burst; gold rose from about $300 to a peak of around $1,900; copper $0.60 to a high of $4.50; uranium ran to ~$130; nickel to ~$23; iron to ~$180: it was all about a billion Chinese buying refrigerators and cars, while the US printed trillions of dollars. Big numbers that attracted big dollars into a sector that had been demolished and was perfectly positioned for a serious melt-up, if there were only a new narrative to bolt onto.
We supplied the ratchet and did it again: nothing could go wrong, and massive quantities of indiscriminate money flowed into mining. The billion in China were soon to be followed by the billions in India and the rest of the developing world. QE and currency debasement was an endless treadmill that guaranteed gold would be the last man standing as fiat currencies imploded around the world.
But then metal prices began to decline, economies slowed, profits disappeared and another crash began again.
What went wrong this time Dad? Is it all over? I mean, like, this time seems really bad.
Next week’s Exploration Insights, kid, I’m starting to get depressed. But there are still a few bright spots in the wasteland of junior mining to discuss.
That’s the way I see it.
Brent Cook
Brent owns shares in Lara, B2 Gold, Nevsun, Premier, and Osisko Royalties.