Texas: Already Producing More Oil than Most OPEC Countries, and Set to Grow

Due largely to the widespread use of hydraulic fracturing and the resulting boom in shale oil operations, oil production in Texas has exploded in recent years.
In March, production in the lone star state reached a staggering 74 million barrels of crude, the highest level since 1984. Output has doubled in less than three years, from a low of 31 million barrels in 2010. If Texas were a country it would be one of the top 15 largest oil producers in the world, on a par with the likes of OPEC members Venezuela, Kuwait, and Nigeria.
The oil boom has brought without huge expansion in the local economy, with wages soaring, and a population boom as people flock to the area to occupy the growing number of jobs offered by the oil industry.
Read More @ OilPrice.com

Portugal’s borrowing costs have spiked dramatically after key political parties failed to agree on a national salvation front, raising the risk of a snap election and an anti-austerity revolt.
by Ambrose Evans-Pritchard
Telegraph.co.uk

Yields on 10-year Portuguese bonds jumped more than 100 basis points to 7.85pc in a day of turmoil, kicked off by a government request to delay the next review of the country’s EU-IMF Troika bail-out until August.
President Anibal Cavaco Silva set off a constitutional crisis on Thursday when he vetoed a reshuffle by the two conservative coalition parties, insisting on a red-blue national unity government with greater legitimacy to see through austerity cuts until mid-2014.
Socialist leader Antonio José Seguro has so far refused to take part, demanding fresh elections to clear the air. “We must abandon the politics of austerity, and renegotiate the terms of our adjustment programme. The prime minister must accept that his austerity policies have failed,” he said.
Continue Reading at Telegraph.co.uk…
Please share this article
at 12:04 AM No comments: Links to this post

Everyone is looking for mouthwatering ideas... the kind that just make you drool since they are so enticing. I have three of them, and they will excite you on multiple levels.

Hopefully you are not reading this article on an empty stomach....

Cheesecake Factory (CAKE) recently appeared on my radar screen even though I have been going to this restaurant and the Grand Lux for several years. My personal favorites include the baked potato soup and just about anyone of the "Glamburgers" they have on the menu.

The June quarter is carrying some big expectations, with analysts calling for revenue of $475M and EPS of $0.57. Just meeting this number would make for a highly favorable comparison to the year ago revenue of $455M and $0.51 in EPS. The growth is likely due to a stronger consumer that has more discretionary income.  (more)

Gold may yet reach US$3000 an ounce, despite recent downward trends and a current level of around the US$1,200 mark, according to ETF Securities' Graham Tuckwell.

Tuckwell, who has built his reputation around the gold ETP, denied that recent highs were a bubble. He said the gold bull market has not ended, because "nothing has actually changed."

"The big problem out there is governments have spent too much in terms of their budget deficits; they've certainly spent too much by the central banks buying bonds and other financial assets via printing of money."

Tuckwell, who was reportedly worth $775 million in 2012, said that potential tapering in the US Federal Reserve's quantitative easing program does not deal with the problem.

"It's one thing to actually slow down the bond purchases, but where's the repayment of them, where's the reversal of that printing of money? If it doesn't get reversed, the only thing that can happen is the debasement of the currency, and history shows that."

He said that as interest rates rise, budget deficits are going to feel the pressure. He suggested that current improved sentiments may be down to the fact that, after years of tough times, "everyone wants a party."

"Gold is the ultimate headmaster on the countries' deficits, fiscal discipline, and the value of currency." He said it could reach US$3000 an ounce within a "relatively short time frame."

The US$3000 figure is wildly above most forecasts, which are mostly flat at the current level. However, UBS global commodity analyst Tom Price said these flat forecasts are based less on informed analysis than on the fact that "people just don't know what's going on."

Price said that there was serious uncertainty in the US and China - saying "there's lots of doubts about the state of the financial system in China," adding, "and of course you can always rely on Europe to stuff something up."
Please share this article
at 12:03 AM No comments: Links to this post

Google Inc. (Nasdaq:GOOG): The Only Tech Stock You’ll Ever Need 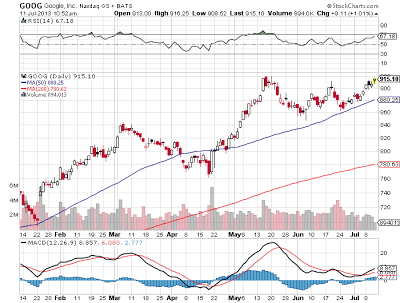 When it comes to cutting-edge science that will redefine how we live and work in coming years, there’s no shortage of fascinating breakthroughs.

Every week brings dozens of new developments covering everything from bionic eyes to drones the size of humming birds.

But there is one big-cap juggernaut that provides stock profits to its shareholders while it’s busy inventing the tech of the future.  (more)