Don’t believe the hype about the housing market. I have proof that most of the buying is coming from small investors/flippers and vacation home sales. I will be writing about this soon.
Oh, let’s not forget that Cramer recommended going long three homebuilders right as the DJUSHB (Dow Jones Home Construction Index) was peaking at 600. I have research reports on two of them that show he’s a complete moron.
How do we know that the housing market – especially new home sales – are collapsing. Well, nothwithstanding the fact the big homebuilders like Lennar are trying to lease out new homes in communities in which sales are approaching zero (LINK), the price of lumber has hit a multi-year low today:
Continue Reading at InvestmentResearchDynamics.com… 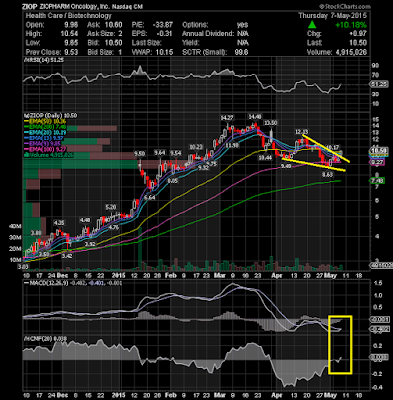 
ZIOPHARM Oncology Inc.(NASDAQ:ZIOP) which has been trading in a falling wedge pattern for three weeks, broke out above the upper line and 50EMA today with a gain of 97 cents to 10.50. The move confirms the stock's reversal. Daily technical indicators such as MACD and CMF are also confirming the bullish price action. ZIOP is a short squeeze candidate, with a short float at 35% (equivalent to 11 days of average volume). 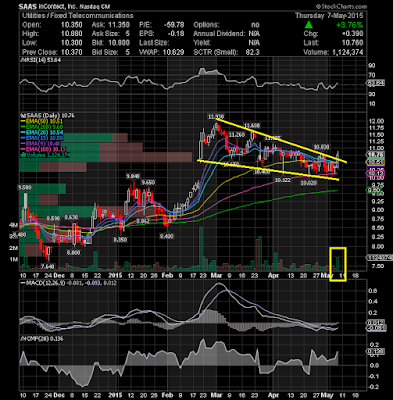 
The short-term outlook for Incontact Inc (NASDAQ:SAAS) looks promising from a technical point of view. Stock broke out of its falling wedge pattern on relatively high volume, and the breakout was accompanied by a bullish MACD crossover. Based on today's action, I expect to see the stock move up in the next coming days. Next major resistance lies at 11.60. Long setup. 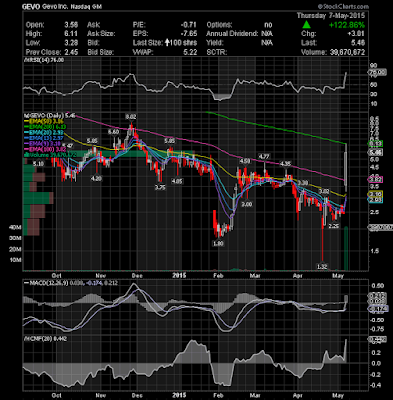 
Gevo, Inc. (NASDAQ:GEVO) traded massive volume on Friday and surged 122%. I will watch the stock tomorrow for a follow through move and have set resistance at $6.13 (200EMA). 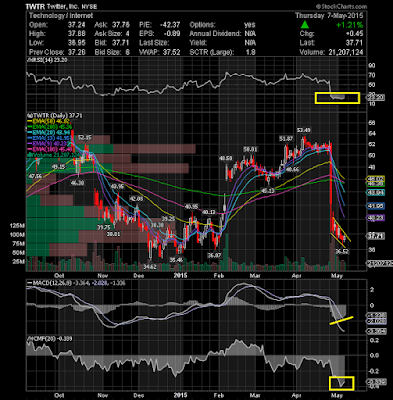 
Twitter Inc (NYSE:TWTR) daily technical chart seems to have bottomed for now. The RSI is trying to move up from the oversold zone while the MACD and CMF are starting to turn up, signaling that a bounce is likely. 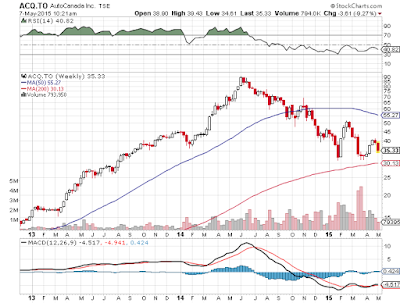 AutoCanada’s share price has plunged even though its earnings are expected to rise further this year and next. It remains a buy for value investors seeking a share price recovery and attractive dividends. AutoCanada is one of a very few high-quality bargain stocks for 2015.
We regularly review AutoCanada Inc. in The Investment Reporter. Between November and April, its shares plunged by over 30 per cent. With the share price down and the company’s earnings expected to grow this year and next, it remains a buy. Buy this bargain stock for long-term share price recovery and an attractive dividend yield of nearly three per cent.
AutoCanada is diversified. Geographically, it operates 48 vehicle dealerships and 56 franchises in eight provinces. This reduces its dependence on each region. AutoCanada is diversified across eight vehicle manufacturers. This lessens its exposure to problems such as strikes or disasters. AutoCanada sells 19 brands of vehicles. So even if consumer preferences change, so can the company. AutoCanada is also diversified by business. It sells used as well as new vehicles; its 822 service bays filled 786,000 service and collision repair orders in 2014; and it earns revenue from arranging for financial, insurance and other services of over $1 billion last year.
Its 2014 adjusted earnings per share jumped In 2014, AutoCanada earned an adjusted $51.6 million, or $2.23 a share. This was up by 22.5 per cent from an adjusted $38.2 million, or $1.82 a share, the year before. The better results reflect both acquisitions and higher same-store sales and earnings. Executive chairman Patrick Priestner said, “We are proud of our annual 2014 results and our growth in units retailed, revenue, gross profit and net income are reflective of the 17 stores we added. We are pleased with the dealerships we acquired this past year as they are integrating well into AutoCanada.” In 2014, AutoCanada’s same-store sales rose by 8.9 per cent, to $1.4 billion. They climbed in all four businesses. The company’s same-store gross profit rose by 7.9 per cent, to $239 million. The gross profit rose in all areas except for wholesale used vehicles. Challenges drove shares down to bargain stock price range In 2015, AutoCanada will face more difficult markets. It found the first two months of 2015 and the last half of December, 2014, “very challenging”. The company decided against raising the quarterly dividend for the first time in a long time. AutoCanada has considerable scope to reduce its variable costs. This will assist the company in facing a number of headwinds this year. Most important is the plunge in oil prices. This has led to layoffs and lower consumer confidence. If you’re not sure whether you’ll still have a job tomorrow, you’re likely to defer purchases of ‘big-ticket’ items such as cars. The company notes lower sales in Calgary, Edmonton and Grande Prairie, Alberta. Saskatchewan, too, will suffer from lower oil prices. Rising production in the Middle East, the addition of oil from Iran and record oil stockpiles in North America suggest that oil will remain low. But AutoCanada sees a ‘silver lining’ in this. It knows that the plunge in the price of oil is hurting car sales in Alberta. But it makes this seem like almost a good thing. AutoCanada will do some value investing of its own AutoCanada writes that “should the Western economy continue for a period at a slower pace, management anticipates that acquisition multiples for Western dealerships will decline.” This would enable the company to expand in Western Canada on the cheap.

A second problem was the weather. Central Canada was in a deep freeze in February. Atlantic Canada faced record snowfall. Now that spring is here, car sales may improve in Central and Atlantic Canada. AutoCanada plans to grow in Central and Atlantic Canada as well as in Western Canada. AutoCanada plans to add from three to five dealerships by the end of May. It boasts of “a strong balance sheet, available liquidity and cash flow.” But the company’s net debt of $685 million is a hefty 10.3 times its cash flow of $66.8 million. It also gives it a high net-debt-to-equity ratio of 1.8 to one.
AutoCanada’s 2014 cash flow jumped by over 39 per cent. But it fell far short of investment of $331 million and dividend payments of $22.2 million. The company had to issue shares to help cover the shortfall.
AutoCanada Inc. (TSX─ACQ) is expected to earn $2.41 a share this year and $3.12 a share next. It is a buy for value investors looking for bargain stocks offering a price recovery and attractive dividends.
Please share this article
at 12:03 AM No comments: Links to this post 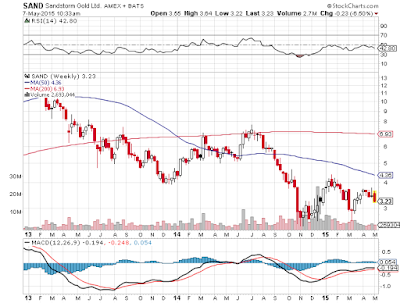 As of May 2015, what penny stocks have been on the rise? Before we get to the answer to that question, let’s go over some of the nitty-gritty. First of all, I define penny stocks as those with an inexpensive share price and a market capitalization of under $2.0 billion.
I urge the readers of these pages to always do their own research. Looking for rising penny stocks starts with looking for businesses with strong balance sheets, rising revenues, positive earnings, and a focused management team.
Now, to those top three penny stocks to watch this month!  (more)

RSP Permian, Inc., an independent oil and natural gas company, engages in the acquisition, exploration, development, and production of unconventional oil and associated liquids-rich natural gas reserves in the Permian Basin of West Texas. It owns interest in contiguous acreage blocks in the core of the Midland Basin, a sub-basin of the Permian Basin, primarily in the adjacent counties of Midland, Martin, Andrews, Dawson, Ector, and Glasscock. The company operates approximately four horizontal rigs and four vertical rigs in the Midland Basin.
Take a look at the 1-year chart of RSP (NYSE: RSPP) below with my added notations: RSPP declined from June until mid-December. After that, the stock started a recovery back up to the $30 level (blue). As a matter of fact, over the course of the last 6 months RSPP has created an obvious resistance at that same $30 level. A break above $30 should mean higher prices for the stock.

The Tale of the Tape: RSPP has a key level of resistance at $30. A long trade could be entered on a break through that level. However, if you are bearish on the stock, a short trade could be made on any rallies up to $30.
Please share this article
at 12:03 AM No comments: Links to this post