PulteGroup, Inc., through its subsidiaries, engages in homebuilding and financial services businesses primarily in the United States. The company's Homebuilding segment is involved in the acquisition and development of land primarily for residential purposes within the United States; and the construction of housing on such lands. This segment offers various home designs, including single-family detached, townhouses, condominiums, and duplexes under the Pulte Homes, Del Webb, and Centex names. As of December 31, 2012, this segment had approximately 670 active communities. Its Financial Services segment engages in mortgage banking and title operations. This segment arranges financing through the origination of mortgage loans primarily for homebuyers; sells such loans and related servicing rights; and provides title insurance policies as an agent, as well as examination and closing services to homebuyers.
To review Pulte's stock, please take a look at the 1-year chart of PHM (PulteGroup, Inc.) below with my added notations: 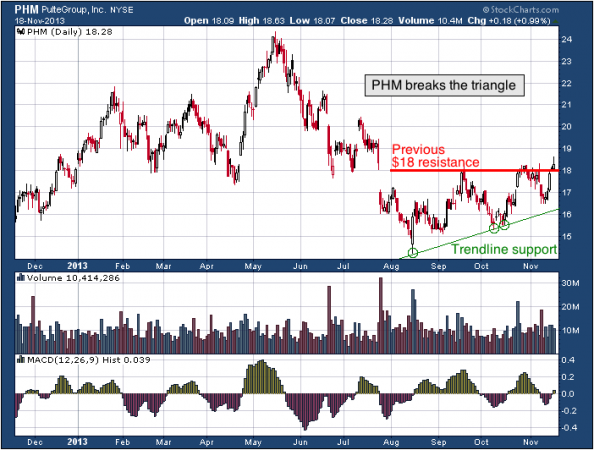 The $18 level has clearly been important to PHM, not only as support from February through July, but also as recent resistance (red). In addition, the stock has formed a trendline of support (green) starting back in August. These two levels combined had PHM stuck within a common chart pattern known as an ascending triangle. At some point, the stock had to break through one of those two levels, and as you can see, it was the $18 resistance that finally broke.

The Tale of the Tape: PHM broke the resistance of its ascending triangle. A long trade could be made on a pullback to $18. A break back below the $18 level would set up a possible short trade and negate the forecast for a move higher.
Please share this article
at 12:04 AM No comments: Links to this post

The HUI Has Penetrated Its June Lows, Gold and Silver To Follow

goldsilverworlds.com / By Bob Kirtley / November 28, 2013
The June low for the gold mining sector was believed to the bottom for gold miners and as such presented a buying opportunity for the precious metals community. At the time we greeted this event with some trepidation and described the capitulation as a capitulation of sorts, but not a final one.
In any bull market we have to climb the wall of worry and gold and silver did exactly that in the first phase of this bull market as many objectors denounced its progress. This wall of worry will always be with us as gold clings on in the hope that there is a U-turn coming and the bull returns with a vengeance.

The June bottom in the mining stocks produced a rally that took this index from 210 to 280 for a gain of 33%. Since then the froth has dissipated and the HUI has dropped back to close at 204 today. It could be that the miners have returned to retest these lows and the bulls may lend a hand here by making more acquisitions, thus providing some support. On the other hand if the miners lose support and the HUI continues to plunge, then the June bottom will join the ranks of the many false dawns that we have experienced since the heady days of a couple of years ago when the HUI traded at around 625. Since then the HUI has lost almost 70% of its value, a gut wrenching disappointment for gold bugs if ever there was one.
The fortunes of the gold and silver producers are largely predicated on the price of both gold and silver and so it goes that we must focus intently on their progress or lack of it, as the case may be. Although it has to be said that there are other factors that could adversely affect mining companies, such as a major stock market correction which would in turn weigh heavily on mining companies as they could be grouped with stocks in general and sold down accordingly.
READ MORE
Please share this article
at 12:03 AM No comments: Links to this post

We Haven’t Seen Shocking Numbers Like This In Years

There is reason to be concerned even with global stock markets on a tear recently. There is a stunning chart and table featured below which all KWN readers around the world need to see.
If you look at the chart and table below it reveals there are some serious warning signals even as many major indexes have been hitting new highs.
Here is the latest Investors Intelligence report along with the all-important sentiment chart and table: “The indexes rebounded late last week and the modest Friday advance turned them positive over the five sessions. After early Monday gains, all three main averages had penetrated even number levels. Broad stock action is not confirming those highs and the negative indicator divergences held. There was more bullishness amongst the advisors, with shifts in that direction outnumbering other changes reflecting new skepticism. The new high in optimism signals a near fully invested outlook that often occurs with market tops. It doesn’t mean an immediate sell-off but the strong likelihood of lower market levels in two-to-three months’ time. Quotes are from the shifting outlooks including one lengthy capitulation.
Continue Reading at KingWorldNews.com…
Please share this article
at 12:03 AM No comments: Links to this post